LimeSDR open source hardware software defined radio was launched last year with the promise of integration with Ubuntu Snap Store allowing to easily download and install various radio implementations such as LTE, WiFi, Bluetooth, LoRa, etc… It was offered for $200 and up as part of a crowdfunding campaign, but Lime Microsystems is back on CrowdSupply with a cheaper and low end version aptly called LimeSDR Mini. 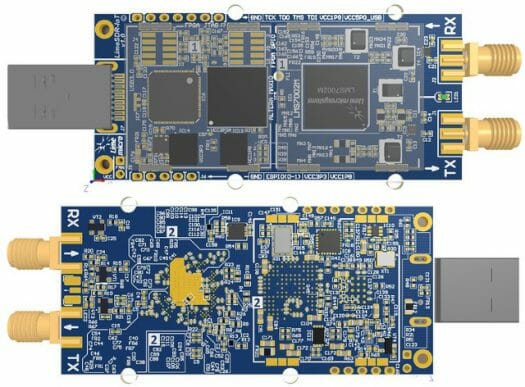 The company also put together a table to compare LimeSDR to LimeSDR Mini and other product on the markers from the dirty cheap RTL-SDR stick to more expensive and advanced solutions like Ettus B210. 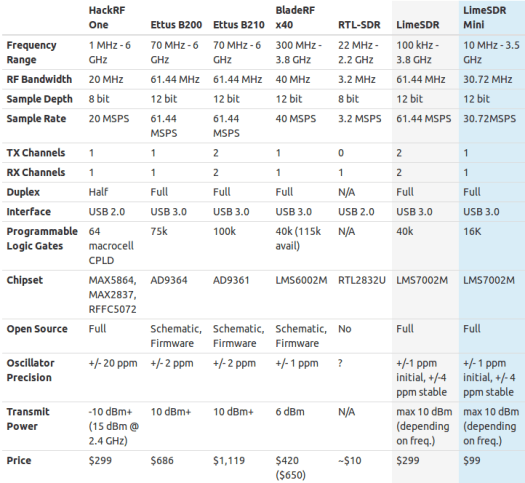 The new LimeSDR Mini board will support the same development tools such as LimeSuite, and Snappy Ubuntu Core apps as its old brother, although I’m not quite sure about the status about the app store, as they did not provide that many details. The board will also be open source hardware, with hardware design files that should be released on MyriadRF’s Github account shortly before or after shipping. The company will also offer some accessories for the board such as an acrylic enclosure, and three SMA antennas optimized for 800-960 MHz, 1710-2170 MHz, and 2400-2700 MHz.

FWIW, the ppm frequency accuracy of the RTLSDR is around 100.

@bria
While I appreciate that someone went all Tim Taylor on an RTL dongle, that’s not the device the above table is refering to. See the price field which says $10? That’s the direct from China price. rtp-dsr wants twice that for their more stable version–if they have any in stock.

@willmore
I don’t understand the reference to Tim Taylors.

Concerning the price field, it must be taken with a grain of salt : the limesdr mini isn’t (anymore) at 99$.

However, my comment is more for the new users interested in sdr and saying that you could still found cheap and stable version of such stick.
No need to buy something at 150$ if one at 30$ is enough for your need, isn’t it ?

The problem there is that those are RECEIVE only. These are transceivers, much like LimeSDR original is.

How much are you shelling out for 16-bit? I’ve been pricing my own little expedition into the space and that little jump costs a bit more.

As for the more stable version…$20 is probably a reasonable price for that.

rtp-dsr wants twice that for their more stable version–if they have any in stock.

$20 is still very cheap. I’ve bought 3 or 4 of them recently and they have them listed on their ebay store so they don’t seem all that hard to get hold of.

I agree that $20 for the stabilized version is a good price and that it’s RX only.

@Nobody of Import
I think I know why you spelled out Received instead of using the standard abbreviation. Seems my reply is awaiting moderation. LOL. Lesson learned.

@willmore
Moderation is probably because of the Tim Taylor link, although I don’t understand why since normally moderation kicks in for 2 links or more, and for (some) new commenters.

@Jean-Luc Aufranc (CNXSoft)
I assumed it was because I used the abbreviation for receive–which looks like a pharama spam term and then a link. I can see how that would make it suspicious.