Anet A8 was one of the first sub $200 3D printer I found last last year, reviews were surprisingly positive. It is now sold for around $150 shipped (with A8PRINT coupon), and experienced reviewers often recommend it to people wanting to get started with 3D printing on a budget.

But last week, as I browsed products on Banggood, I found something even cheaper with 101Hero PYLON 3D printer going for $107.99 shipped with coupon 349da5, and further research lead me to the official website where they sell it for $99 excluding shipping, and provide documentation and video tutorials. 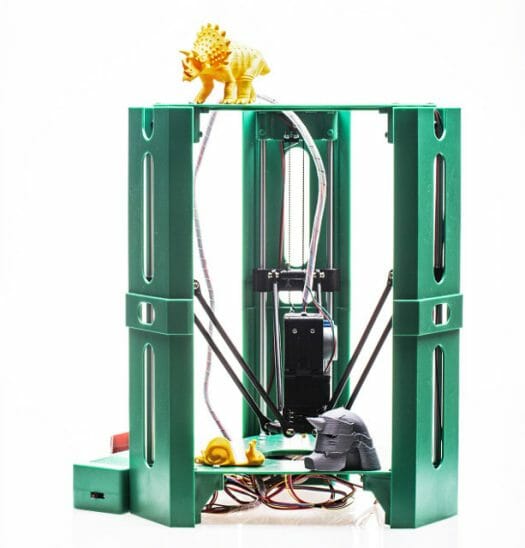 The 3D printer comes as a kit that you need to assemble yourself, and also includes a power adapter, a 2x 30g PLA filament (black & white color). It’s said to work with Windows 7 and greater, as well as Linux.

The printer was initially launched on Kickstarter for $49 (+ $30 shipping), and backers received their 3D printer around the beginning of this year so we have already reviews. The best one I found was from Maker’s muse where he explained how they could come to such a low price: 3D print pen technology for the nozzle, and rather weak motors. As can be seen from the red rocket on the right, it does not always print nicely, and while he does not recommend the 3D printer, and instead tell people on a budget to go with Anet A8 in comments, he was impressed that such cheap 3D printer would even exist.

Others were not so forgiving, with one person titling hist video “DO NOT BUY THIS 3D PRINTER (101Hero = 101Zero)“, but  tswaen took a more philosophical approach, saying it was ” license to really learn and understand how 3D printing works”, and wrote instructions showing how he upgraded it to make it better. If you like a challenge, and are interested in this 3D printer, there’s also a private Facebook group where you can share your pain experience, or learn from others.

Not to downplay that product but isn’t the imakr “startt” better for that price?

This coupon has expired 8-(

@Onanii
101hero printer is not good, so any alternative for a similar price is welcomed. I can’t find any review for it yet, and it’s only sold (pre-order) on their own website with delivery in December.

Did quite a bit of research myself before ordering the Anet A6 as a compromise. I wanted a model that could be upgraded so I could learn the technology. On a very tight budget consider getting either the Anet A8 or Anycubic Kossel. Anet A8 can be found for around $120 and the Anycubic Kossel $140. If you just want something that works and can manage to save up a little more money then get a Creality3D CR-10. The older version of the Creality3D CR-10 can still be found for around $300, while the newer upgraded versions or larger models… Read more »

I would like to see arm Notebooks which you can use as work notebook. I got an ac100 some time ago. But it wasn’t that great. Missing driver in Linux, missing performance.