Ncomputing RX300 is a thin client based on Raspberry Pi 3 board, allowing to run Windows operating systems on a powerful server with the Raspberry Pi 3 handling the display, audio, and keyboard/mouse inputs.

The company sent me a sample for review, and I checked out the hardware and accessories in the first part entitled “NComputing RX300 Thin Client Review – Part 1: Unboxing and Teardown“, so in the post I’ve started the thin client, and connected it to vSpace Pro server. 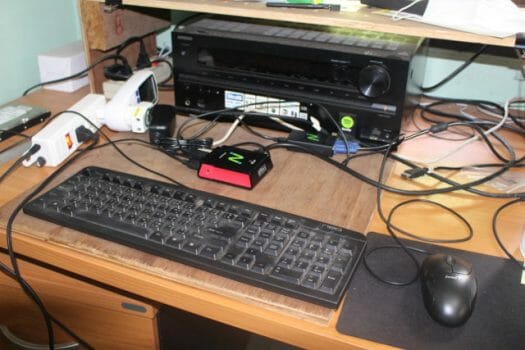 RX300 uses the same peripherals as any mini PC, so I connected USB keyboard and mouse, an Ethernet cable (WiFi is also possible), and the power adapter. You could also connect other devices, and I added a USB flash drive which, as we’ll see later, will be properly recognized by the server. I was also sent a USB to VGA adapter that you can connect to the remaining USB port to add a secondary display, but it would never work with through my TV, maybe because VGA is limited to 1600×1050, and the resolution confused the adapter.

You’ll also need to setup a server, and you have two main option here:

If you’re interested in the first solution, you may want to read to Quick Installation Guide to find out more.

Once the thin clients are installed, and the server is configured, you can start your RX300 devices. About an animated boot logo, you should soon (around 15 to 20 seconds total boot) time see vSpace Pro client interface as shown below. Please ignore the vertical lines in the photos and video below, it’s just a problem with my TV. 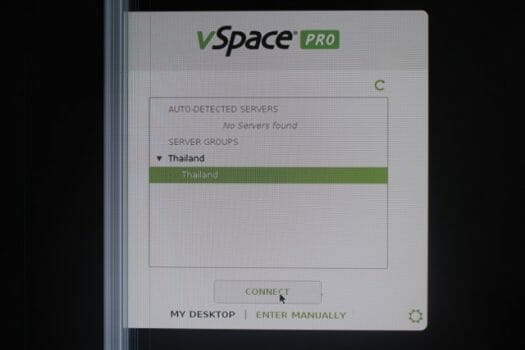 You’ll see two sections with a list of auto-detected servers if you have setup any local vSpace Pro 10 machine, and/or server groups with other vSpace Pro servers. I’m located in the north of Thailand, and Thailand->Thailand was already setup, so I had nothing to do except click on Connect, and within a few short second, I was asked to login into Windows. 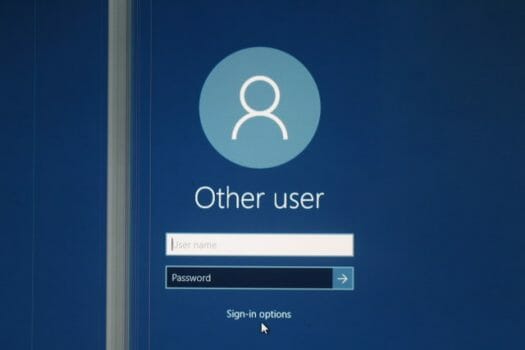 I typed the credentials provided by the demo, and I ended up in Windows right away, and could use it normally. A few times later however, I was automatically disconnected during the login process: I would type the user name and password to login, Windows desktop will appear, only go to back to vSpace Pro client interface. Trying again once or twice usually did the trick.

Quite a powerful machine so we should expect good performance that may be affected by the Internet connection between my ISP’s modem router and the server. You’ll also notice “Ubuntu 16.10” D: drive. That’s my own flash drive connected to one of the USB port of the Raspberry Pi 3 board.

The company had install several programs such as Chrome and LibreOffice, as well as demo files.  I also tried to install my own program (Gimp), and I could do that, and persistent storage mean even after I disconnect the client, or reboot the server, my programs and files were still present in the system.

So I went on to use it like I would for a desktop machine in a business setting, browsing the web, and loading multiple programs.

Overall the performance is impressive for a remote system, and in many cases, it’s hard to know we are not using a “normal” computer. The fonts may not be as sharp as on a normal PC, but it’s hardly noticeable, and the screen updates while scrolling up or down web pages are slower than on my main computer. However, I did not feel either issues were a big problem, and they will likely depend on your network performance, in my case “low to moderate”. It feels much better than the few times I used VNC in the past.

The first time however, YouTube video playback was very choppy, but then I saw Chrome complaining about “vCAST feature not available”. vCast streaming technology is a premium feature allowing you to watch videos smoothly on thin clients. After the company enable vCAST in the server, I could streaming 1080p YouTube videos, and play local video in VLC smoothly.

You can watch the video below to have an idea of the performance, and a look at the client settings.

Once you are done, you can click on the power icon and select Disconnect to go back to vSpace Pro client user interface.

vSpace Pro client configuration options and Going back to Raspbian

If you’ve watched the video above, you’ll know that the gear icon on the bottom right brings use to the configuration menu.

The menu has eight sub-menus:

I tried the Raspbian desktop mode, and sure enough it will be into Raspbian, and you could potentially use it as a normal Raspberry Pi 3 board too. 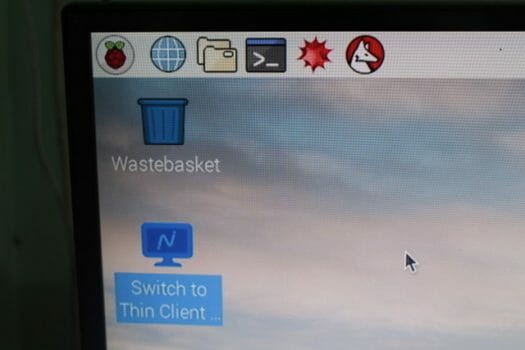 Once you’ve selected this mode, it will boot to Raspbian by default. If you want to use it as a thin client again, the Switch to Thin Client Mode icon will reboot RX300 to vSpace client user interface.

If your organization owns some older Windows PCs or laptops that lack the performance or memory to run recent programs, you could download vSpace Pro client for Windows to put them to good use. Just to the the Software Downloads page, register or/and login, and select vSpace Pro Client for WIndows 7, 8.1 or 10 as needed. Linux clients are not available for download. 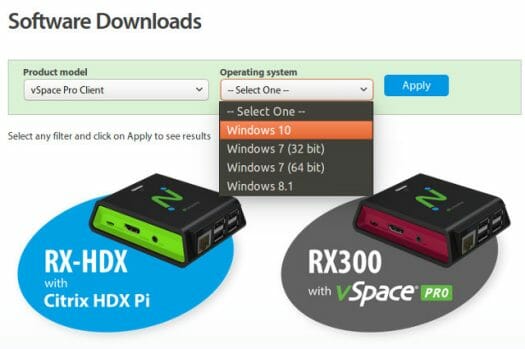 You could then have a “fleet” a thin clients mixing older hardware and NComputing RX300. You’d have to consider electricity charges while calculating your TCO, as RX300 only consumes around 3.0 to 3.4 Watts, and older hardware may consume much more than that.

Larger organizations should probably contact the company to find out the best way to match their requirements. But if you have smaller needs, or just want to evaluate the system, you could purchase Ncomputing RX300 for $99 MSRP with a 1-year license, or $174.99 with a 3-year license. I understand vCAST streaming is included for free for 6 months, but after you’d have to pay extra for the feature. What I could not find is public pricing for the various licenses. The company however has a cost calculator allowing you to check how much you’d save with thin clients compared to having PCs, but again premium features license costs such as vCAST or dual display are not included. You’d also have to consider Windows server license requirements.

Cloud computing via thin clients never took off on the consumer desktop because of all the nested and intertwined licence and service tiers that nickel and dime you to death. It’s sad to see that with this new offering, nothing has changed.

@Drone ‘Cloud computing’? Huh? ‘New offer’? What? The only new thing is that in the meantime Internet connections show latency low enough and bandwidth high enough to demo such stuff from some server in another country, that such stuff can run on a SBC now and that they managed to get vCast compatible with the VideoCore VPU. Usually the vSpace Pro server is just around the corner (lab/school environments) or at the other end of a VPN connection. @Jean-Luc Aufranc (CNXSoft): It’s a bit hard to judge the user experience you had without knowing ping roundtrip times and bandwidth available… Read more »

This clients might save money via reduced end user costs. $99.99 per year is pretty cheap for maintaining the hardware. Normal organisations invest $999 in each workstation every 3 years. If not much more. If you have 100 workstations, you already save $60000 in 3 years which isn’t that much but you can easily afford powerful servers and few months of salary. But you don’t need a full-time server admin.

@Drone It’s not sad. It’s fortunate. There’s nothing good about letting a third party hold you by balls over your storage and compute. Especially when transistors and memory are cheaper then ever. It was insufferable when IBM tried doing it in the 80s and it’s ridiculous when Intel is failing to do it now. I don’t know about you, but I’m not the bailout plan for Intel’s failing economic model. They don’t get to rent-seek by intentionally sabotaging personal computing so people will be forced to use their servers. It will be a cold day in hell before programmers will… Read more »

@tkaiser
Watching the video should give a good idea of the user experience.

The Windows server does not answer to ping requests:

My Internet connection has a maximum 20 Mbps download so that’s the best that would have been possible.

@Jean-Luc Aufranc (CNXSoft)
Bandwidth with such remote access scenarious usually is less of an issue compared to latency. There’s ping.exe on Windows so maybe you can do a ‘traceroute 54.173.174.2’ from your host and then ping your box or the next hop from the Windows box?

I would assume this Windows box can initiate outgoing network traffic (registering at NComputer’s server for example to show up in your list of available vSpace Pro hosts) so this might work.

@tkaiser
The ping time is 61ms this morning.

@Jean-Luc Aufranc (CNXSoft) Hmm… I had customers for over a decade nearby you (doing data sync and remote access stuff between Thailand and EU/US) and ping latency was highly dependent on time of the day. The Thai people had to finish some stuff before certain hours otherwise remote work became impossible. So without knowing how user experience looks like when you get the 60ms it’s kinda… Anyway, most probably the RX300 isn’t sold for such remote access scenarios and focusing on your somewhat unrealistic demo setup is useless. At least for me it was an interesting read that in 2017… Read more »