I wrote about NanoPi Fire2 & Fire3A boards based on Nexell S5P processors a few days ago, and at the time, as I checked out Nexell website, I found out about the company’s NXC100 Voice Recognition SoC that can be used in 4-mic array board.

The chip can then be connected through SPI to a host processor, and Nexell appears to have a NXP4330Q Smart Voice kit based on their quad Cortex A9 processor of the same name. But since documentation is really limited, I looked for more details, and came across NXP4330Q based ALTO board design by InSignal, which sold the Exynos powered Arndale boards a few years back.

The chip is the only product from the “A.I related” section of therir website, but more are likely to come out as the company is working on GP-GPU (General Purpose GPU), machine learning, and even registered http://opengpgpu.org/ website. But no info for now about the later. 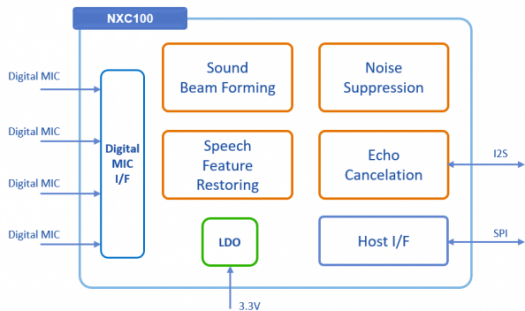 Back to NXC100 chip with the specifications:

That’s about all we know from the product page. The developer page links to NXC100 datasheet, and reference schematics for a development board with NXP4330Q processor and a 4-mic array board based on the solution. Sadly, those files require login credentials, so you’d have to contact the company, and likely provide details about your company and project(s) before getting access.

At first, I thought this was a new processor from NXP Semiconductors I had never heard off, but no, that’s really a quad core ARM Cortex A9 SoC from Nexell themselves.

It’s been designed for tablets and cell-phones, and manufactured with a 28 nm low power process. I assume the processor is then a few years old. But then I looked at S5P4418 page, and the block diagram is exactly the same, so Nexell NXP4330Q should be Samsung S5P4418, but the company is just not allowed to promote Nexell S5P4418, and instead can sell NXP4330Q. This is further confirmed by the developer’s page for NXP4330(Q) which refers to S5P4418 too, and again nothing is accessible without login. There’s also an automotive grade version of the processor – NXP4330Q-A – compliant with AEC-Q100 standard.

I still looked for an NXP4330Q board that might use NXC100 voice chip, and I had not luck, except for Insignal ALTO board based on NXP4330(Q) minus the MIC array part.

For unknown reasons, the company did not provide photo for the complete development board (only close up on some parts), but they still release the block diagram, and the specifications with the board comprised of a CPU module and a baseboard:

The kit ships with a 5V/2A power adapter, a serial cable, a HDMI cable, a 1024×600 TFT LCD module, and a capacitive touchscreen panel. Public documentation is inexistent, which seems to be a common feature of all Nexell branded SoCs and boards.

I was about to close this post on a disappointing note, but I found two block diagrams for their voice assistant. The first is shows NXC100 used with NXP4330Q SoC as discussed above, with Linux and Android BSP available, and Amazon Alexa support.

The second appears to be more integrated at first, as it does not include a separate voice processor, but all four microphones’ audio data and voice processing is instead handled by Nexell NXP3220 dual core Cortex A7 SoC. The processor does not include any special hardware, so I’d assume it’s designed for lower end smart speakers that may not filter noise as well.

I’ve also noticed Nexell has a new 64-bit ARM 4K/UHD processor (NXP5440) with USB 3.0, Gigabit Ethernet, and DVB support, but since it has nothing to do with voice recognition or smart speakers, that may be for another post later on.