For some reasons, Samsung S5P4418 and S5P6818 quad and eight Cortex A53 core processors – likely made by Nexell – have been quite popular with embedded systems companies based in China. So after Graperain, Boardcon, and FriendlyARM, there’s at least one another company offering solutions with either processor, as sModule, a subsidiary of CoreWind, has now launched systems-on-module, single board computers, and development kits with the 64-bit ARM SoCs. In this post, I’ll cover one of their development kit including their CORE6818 CPU module, a baseboard, and an optional 7″ capacitive touch display.. 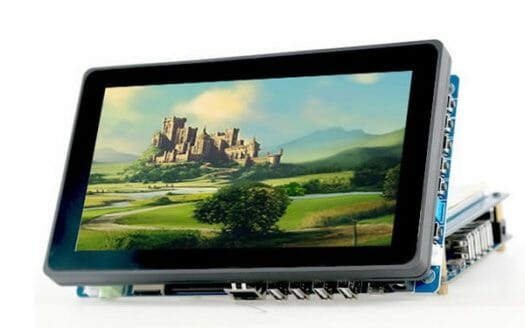 The company provides Android 4.4, Ubuntu 12.04, and Linux 3.5 + qt 5.0 for the board. As with other boards based on Samsung/Nexell S5P processors, don’t expect software updates for the firmware, so if you need security patchsets or the latest kernel features this won’t work for you. You can find a few details about the hardware on the Wiki. 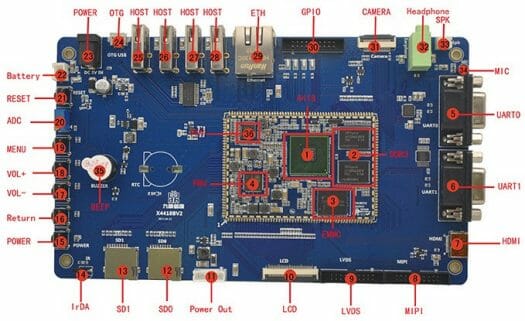 While other companies kept their price secret, sModule published prices for all their modules and boards, and even allow you to purchase them by PayPal or bank transfer. Their CORE4418 module starts at $49, while the development kit above goes for $119 with the touch screen, and $109 without. The more compact iBOX6818 single board computer – they call it card computer – with 2GB RAM goes for $75. More details can be found on sModule products page.

Anyone thinking about performance when reading ‘S5P6818 octa-core ARM Cortex A53 processor @ 1.4 to 1.6 GHz’ should have a look at the board and spot the huge (but non-existing) heatsink that is a requirement to get decent performance. Some interesting numbers regarding temperatures/consumption have been collected here: http://climbers.net/sbc/40-core-arm-cluster-nanopc-t3/ (NanoPC-T3 uses the same Nexell octa-core SoC but FriendlyARM designed their board in a heatsink friendly way and sells a huge one that fits perfectly and reduces temperatures by over 35°C under load!). So while performance will already suck due to missing heatsink, being able to run only an old 32-bit… Read more »

Not long ago I came across somebody who thought that ARM-based SoCs, in general, did not need any heat dissipation means. True story.

@blu
I used to work on MIPS/ARM processor 5 to 10 years ago for digital signage players, and Linux TV boxes, and heat dissipation and power consumption were never an issue. The processors were selected because of their cheap price. Since then, ARM processors’ performance and heat have increased a lot, so it’s sort of a new issue that appeared in the last 5 years or so.

@Jean-Luc Aufranc (CNXSoft)
Understandable. I’d go even further and note that my first three, erm, desktops, did not have anything resembling a heatsink inside their cases, worked perfectly, and that was some mere 30 years ago : ) But the anecdote I’m referring to happened about a month ago, in reference to a SoC which is well known to throttle on certain popular SBCs. I was mentioning how it would be nice if this new SBC using the same SoC had a heatsink for a change (which it did not), when the other party countered: ‘ARM SoCs don’t need heatsinks.’