There’s also a Beta Interface dummy board that acts as a bridge between the image sensor board and the rest of the camera. 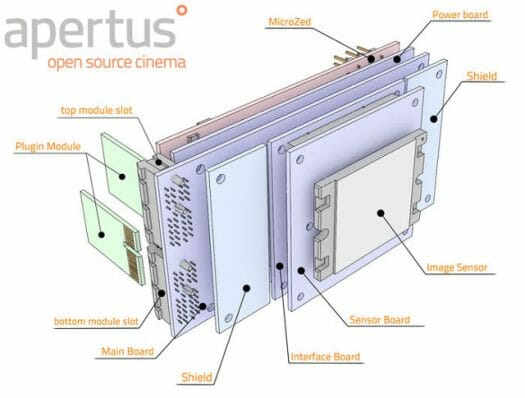 The camera will run Arch Linux ARM on MicroZed board, support common network protocols (SSH/FTP/SCP/etc), and be configurable via a web interface. Features will include global shutter capture, output of 4K RAW experimental HDMI/Displayport outputs over 1080p60, remote control, WiFi connectivity, support for  motion tracking via various sensors for image stabilization, as well as image processing with Look-Up-Tables (LUTs), matrix color conversion, dead pixel compensation, and so on. However, audio recording is not currently supported. Many more software and hardware details can be found in the Wiki.

A compact enclosure is also planned for the production camera that will be called AXIOM Beta Compact, and while the timeline is unclear, you can register your interest for what is planned to be a 5,990 Euros camera. Some of the development kits pictured above have been shipped last summer, and can still be ordered for 3,990 Euros ex. VAT. FYI, the image sensor represents around 2,000 Euros out of the total cost. Visit the product page for more details.