Last month, we wrote about Cloud Media’s Popcorn Hour Transformer, a platform based on Rockchip RK3328 processor that could be used a 2.5″ drive NAS, and/or a 4K HDR TV box, and looked like an interested alternative  to ODROID HC1 NAS system.

The transformer ships with a 5V/3A power supply, and an IR remote control. 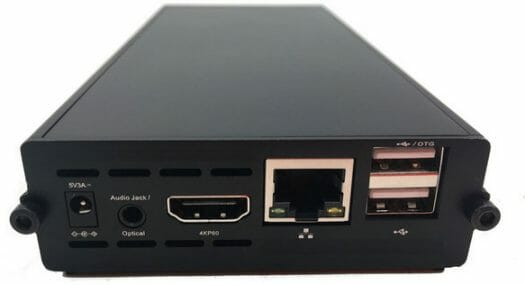 Two variants are offered with exactly the same hardware, but while the “Media Computer” version is pre-loaded with Android 7.1.2, the NAS version comes with OpenMediaVault instead. The company also mentions community supported images for the device, which should be (mostly) software compatible with Pine64 ROCK64 development board, including Lakka (RetroArch) for retro-gaming, open source Android TV and Xenial Mate Desktop both maintained by ayufan, LibreELEC maintained by Raybuntu, and others.

At first, I found the price gap to ODROID-HC1 (sold for $49) ludicrous, but Transformer does include 16GB storage, and a power supply, which needs to be purchased separately for the Hardkernel mini NAS, so while the gap is still there, it’s not as large as the advertised prices entail. Popcorn Hour Transformer also supports video output, and comes with a fully closed case.

The Transformer should be fully compatible with ROCK64 (at least this was one of the design goals to avoid the hassles of ‘porting’ OSS images to TV boxes like Alfawise Z28 PRO). Speaking about prices this is just funny. Said Alfawise Z28 PRO with dual-band Wi-Fi and Gigabit Ethernet (the 2GB RAM, 16 GB eMMC variant) is on sale at Gearbest für $39.99 shipping included so I need to add just another few bucks for a JMS578 USB3-to-SATA cable and get same functionality (though some hassles to flash images of course). The smaller Transformer with same amount of DRAM/eMMC costs… Read more »

@tkaiser: Case and power supply being taken care of? Realize that not everyone has the patience to jerry rig things out of an ODROID, etc. board and make their own. >;-D

Nobody of Import : @tkaiser: Case and power supply being taken care of? Sure. The Alfawise Z28 PRO is a TV box and comes with case, PSU, IR remote, internal eMMC for 40 bucks shipped. The HC1 picked up the concept prior to Transformer (small PCB with added JMS578 USB-SATA bridge with large enclosure like metal heatsink that fits also the 2.5″ disk) is available through a local reseller and combined this is just 65,-€. The Transformer pricing makes me really sad since it’s a lost opportunity and I already regret wasting my time on this device. BTW: You find… Read more »

What about 3.5″ drives? Will there be a bigger version?

Ian Tester : What about 3.5″ drives? Will there be a bigger version? They said they think about a 3.5″ Transformer XL when the Transformer is successful (which I doubt since too overpriced). Only minor tweaks would be needed for a 3.5″ variant since all that’s needed is powering with 12V and providing the 3.5″ disk with both 5V and 12V. But this was already covered in the 1st link to another CNX article in the invisible 1st paragraph 😉 On both ROCK64 and Transformer it’s possible to toggle power to all USB ports via GPIO0_A2 so you’re able to… Read more »

I agree. Too high priced. I’d rather have bought HP Microserver Gen 8 while they were on sale last year rather than this. But now i’m waiting for my V88 Piano boxes with RK3328+4GB RAM to try to get Linux running. If/when when they do work with Linux, i’d post back here. I mean that box would cover all my needs really since it’s got: -GbE – 1 x USB 3 port + 2x USB 2 ports – Built inn eMMC, but i dont’ care since i’m gonna run OS from uSD – 4GB RAM I’ll cover most of my… Read more »

@fossxplorer
Also interested into V88 Piano box.
If someone manages to update Rock64 images to support Piano GbE chip, it could become cheap NAS box alternative. My biggest concern is cooling, because Piano box top side is closed.
First pictures seemed like it has ventilation holes but unfortunately it’s not the case…
But cooling can always be solved somehow…

@Blackie
Yeah, i’ve read that GbE is not working. So if we are lucky, @ayufan will update it with the driver. I’ll help when i have the box in my hand.
Yes, i’m not worried about cooling since i have many heatsinks laying around..or i will buy one. USB fan on top can be considered too additionally.

@tkaiser
The ODROID HC1 is just stupid in that is comes with 1/2 a case. Why the hell could they not have offered to sell an aluminum or plastic cover to make it a complete case? I often wonder what these guys are thinking? smdh.

@Mike Schinkel
They do. You can buy the upper half case part extra, but since the HC1 is supposed to be stackable, they don’t sell it together by default.