Raspberry Pi, Orange Pi, and NanoPi boards among others are all great and inexpensive Arm Linux development boards that do good enough job for many tasks, but they may not cut it if you have higher requirements either in terms of CPU power, GPU capabilities and performance, I/O bandwidth, and in some cases software and support.

So I’ve decided to make a list of 5 single board computers or development boards that I consider to be the most powerful in 2017, early 2018. I have limited the price to $1,000 maximum, the board must be easy to purchase for most people (e.g. you don’t need to be a tier-1 automotive supplier, or operate your own datacenter), and in case the board is not quite available yet, the likeliness of actual launch must be reasonably high. Those criteria for example exclude Intrinsyc Open-Q 835 development kit since it costs $1.149 and the company may not sell to individuals (TBC). Let’s get started. You’ll find more details for each board by clicking on the headings links.

The company provides a Linux for Tegra and JetPack 3.0 SDK to leverage the board deep learning, artificial intelligence, and computer vision capabilities. 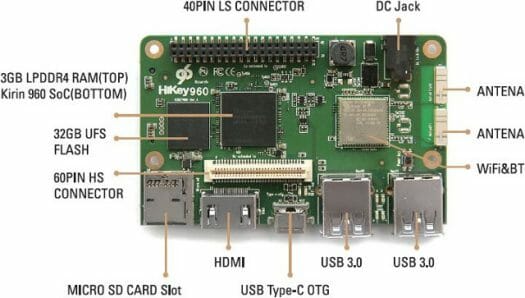 Hikey 960 is a development board that complies with 96Boards CE specifications, and features Huawei/Hisilicon Kirin 960 octa-core big.LITTLE processor with four ARM Cortex A73 cores @ up to 2.4 GHz, four Cortex A53 cores @ up to 1.8 GHz, and a Mali-G71 MP8 GPU. The board is further equipped with 3GB LPDDR4, and 32GB UFS 2.1 flash storage.

The board will be especially interesting to Android developers since it is officially supported by AOSP, and you can work on the latest Android version with a powerful development platform. 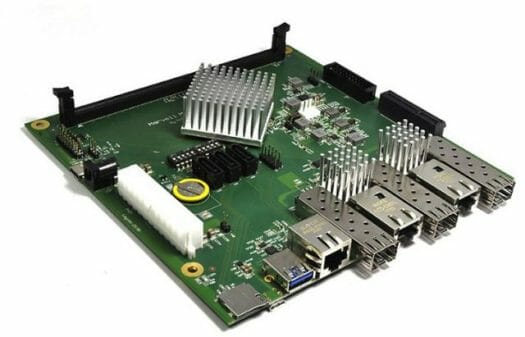 MacchiatoBIN mini-ITX board may come with a powerful Marvell ARMADA quad core Cortex A72 processor clocked up to 2.0 GHz, but what makes it stand apart are its storage and networking ports with three SATA 3.0 interfaces, and multiple Gigabit, 2.5 Gbps and 10 Gbps network interfaces. The board ships with 4GB RAM by default, but its DDR4 DIMM supports up to 16GB of memory.

Solidrun/Marvell MacchiatoBIN board can be purchased on Solidrun website for $369 to $518 depending on options (RAM, power supply, micro SD card).

DragonBoard 820c is powered by Qualcomm Snapdragon 820 quad core Kryo processor with Adreno 530 GPU, 3 GB LPDDR4, and 32 GB UFS Flash. The board complies with 96Board CE Extended specifications, and include Gigabit Ethernet and an mSATA/mPCIe slot not found in smaller boards.

Contrary to Hikey 960 above supporting Android only, the Qualcomm board supports Linux (Debian, Open Embedded, Yocto Project) on top of Android, and also benefits from 96Boards ecosystem in terms of software support, and hardware expansion boards called Mezzanine products.

The board was first spotted in May 2016, and it is now available yet, which has understandly lead people to suspect a case of “Vaporware“, but Bill Davies, responsible for Arrow’s DragonBoard program, very recently responded that he expected the board to start selling in “weeks”, not “months”. Linaro engineers have also been working on the platform, even having some fun with a video game arcade project. So we can probably expect it early next year.

GIGABYTE Synquacer macro-ITX board won’t beat any single thread records with its SocioNext SC2A11 ARM Cortex A53 processor, but considering there are 24 of those, the board could perform well with workloads that can utilize all 24 cores in parallel.

What really make this board “powerful” however is its flexibility, as it’s an ATX motherboard – compatible with 96Boards Enterprise specifications – that will be sold either as a standalone board, or in a PC tower. You’ll be able to add up to 64GB memory via its 4 DIMM slots, SATA hard drives and SSDs to its two SATA connectors, and add off-the-shelf PCIe cards. It will mostly serve as a development platform to test and support PC accessories, and be a first step in bringing an Arm development computer that can challenge x86 solutions.

The system was first expected in December of this year, but the latest news states shipping is expected to start in January 2018, and reservations can already be made on Chip One Stop.

I’d expect some of the boards here to be dethroned by Arm Cortex A75 solution or other custom ARMv8 cores by the end of 2018. If you disagree with the list, and what are included another board, let us know in the comments section taking into account the limitation expressed in the introduction.

What about those open-q boards? They have snapdragon 835 and 820 boards that seem to be shipping. Haven’t tried personally…

Just a remark on MacchiatoBin’s PCIe slot usability with GPUs: from the last batch of board rev1.2 onwards the issue with GPU add-on boards has been resolved. It’s also ‘patchable’ on earlier boards, if one is confident enough with a soldering iron.

@Matt Gattis
Do you mean like the Open-Q 835 board I mentioned and linked to at the top of the post? 🙂

@Jean-Luc Aufranc (CNXSoft)
Ha, oops. Well their 820 kit might go on this list if the dragonboard 820 is, as it’s $549, in stock, and individuals can buy from their website. I’m considering pulling the trigger since it has a cheap SOM for production and I’m working on audio/music applications so the hexagon DSP is a big bonus. I’ll report back if so…

@Matt Gattis
excluded specifically because they’re very expensive and probably worth their weight in unobtanium.

ARM on servers is a disappointment. 5 years later the platform is stuck in the exact same place. Limited IO, software and driver issues, poor performance. Its a complete time sink with low returns. Phone and TV boxes are its limits. I got a Apollo lake Nuc for $149 and its so much more useful than any Arm board, no driver issues, performance is there, no software issues and can run multiple VM’s and containers without breaking a sweat. And its a 10W part. Now with Ryzen we should soon hopefully have low power 4 core and 8 core machines.… Read more »

Under my desk there is APM Mustang with aging X-Gene cpu. Running latest kernel, with Radeon graphics card and so far I did not found hardware which not worked there and worked in my x86-64 machine (not tested Geforce 1050). 5 years old cpu but still capable of running multiple VMs and containers.

It is not 2012 anymore where lot of software was not working on aarch64 platform.

@raul
Arm have their priorities right — they provide a modern state of the art ISA and off-the-shelf implementations of that. As per limited io, you must be confused — arm SoC blow same price range x86 offerings out of the water. For instance, take the macchiatobin — have you checked the prices of dual 10Gbe x86 boards?

@blu
Hi blu, please advise how to use soldering iron to resolve GPU add-on issue on early version MacchiatoBin’s PCIe slot usability? I am currently designing a RK3399 board with PCIe 4x open-end slot and just want to make sure that not suffer on similar GOU issue.

@TL Lim
Here’s the original article on the fixup: http://wiki.macchiatobin.net/tiki-index.php?page=MACCHIATObin+%28up+to+rev+1.2%29+PCIe+reset+fix