VideoStrong K1 Plus T2/S2 is an Android 5.1 set-top-box with DVB-S/S2 and DVB-T/T2 tuner that was launched roughly two years ago with Amlogic S905 quad core processor. Since then, the company has now launched variant of the model with Amlogic S912 (e.g. KIII Pro hybrid TV box)  or Amlogic S905D (e.g. KI Pro set-top box) processors.

But now, provided the information on Alibaba is correct, the company has launched a new version of KI Plus T2/S2 with Amlogic S805X which should be cheaper, run a more recent Android 7.1 operating system, at the cost of losing support for 4K decoding, since the processor only support Full HD (1080p60) decoding at most. 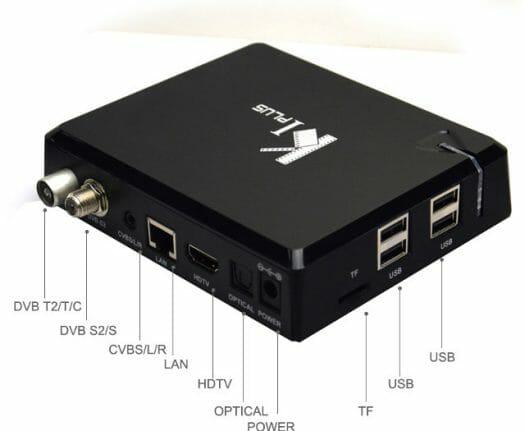 Since the company updated an existing product, some specific details are wrong on Alibaba, but KI Plus T2 S2 (2018) specifications should be as follows:

The new K1 Plus S805X TV box appears to only be offered to distributors for now, and information about the retail price is not available. For reference, the FOB price listed on Alibaba is $28 to $40 per unit (depending on quantity).

“at the cost of losing support for 4K decoding”

Very interesting….the hybrid approach, coming down to $35 with a S905X 1/8GB Android Box about $25 ! The 4K feature on such cheap boxes was overkill.

Faintly remember your earlier details with some concerns about streaming, hopefully fixed.

Question: Do you know if the DVB ports can be made both T2/C or both S2? Might just be a FW change with “programmable” tuners.

Also, could you run two instances of the media player (which one?) on top of Android to stream to two different TVs (one HDMI, the other CVBS), with a second remote control set to the second instance.

@Athar
The tuners are different, so that’s something you’d need to ask the company to do, and I’ve seen model with dual T2 tuners in the past. But I’m not sure they’d work independently with Amlogic S805X, and instead you may need Amlogic S905D where you can record the stream from one tuner, and watch live TV from another at the same time.

So far, I don’t think I’ve ever seen “extended desktop” on Android, only mirroring.

Thanks for replying. I however don’t see a difference between S905X and D from your own chart, but there must be !

Maybe a typo above? Why would D support multi-channels but not X?
Should be same firmware?

You can google YouTube to find demos of multiple Kodi versions running on same PC, so outputting them on two different (HDMI, CVBS) interfaces should be the next step. And Android should do this, too. E.g.,

@Athar That’s because the table does not mention anything about DVB. If you look at S905D key features @ https://www.cnx-software.com/2016/03/10/amlogic-2016-roadmap-reveals-upcoming-s905d-processor-android-6-0-for-amlogic-s905-and-s912-socs/ you’ll see: Video Input – TS in, DVP The TS input part is important, but does not say all (since documents are not publicly available). However, from other sources (people I contact by email) and testing, we do know S905D support two demodulators, meaning both tuners can be used at the same time. For Amlogic S805X, I just don’t know since I did not get any information about that. S905X does not support tuners with TS input at all. Android… Read more »

@Jean-Luc Aufranc (CNXSoft) This all is revealing… 1. So you are saying that streaming TS from TVheadend server software to Kodi with TVH client will not work with S905X Android Box? Or is the lack of TS support limited to DVB tuners/other hardware tuners in the hybrid Android Box; while software tuning is upto the software itself? I always thought TS streaming was a software function (eg media server to player support) as long as the hardware supported general video processing. 2. Your example says two HDMI support. How about one HDMI and one CVBS same time streaming support, with… Read more »

IIRC, each tuner in DVB S2 or T2 STBs tunes in to a single multiplex/ transponder, each of which carries multiple (6-8) digital TV channels. For DVB C/C2, the entire channels multiplex is received by the STB tuner. The usual multiplex format is TS, according to DVB specs.

In principle then, given resources, you could demodulate all these available channels at once (instead of just one channel via one remote control), and then also display all of them (with one remote for each respective channel), each over its own HDMI, CVBS, or wireless to DLNA interface.

@Athar 1. Try to find an S905X TV box with tuner, you won’t find any, and there’s a reason for it. Maybe it would be possible to hack something with a USB tuner though. AFAIK TVHeadEnd (server) does not work in Android. 2. I think the hardware should support dual independent display, but somebody needs to handle the software. There’s close to zero demand for this, so you’d have to ask them to do it for you. For your follow-up comment, in theory it should be possible to stream all the channels from a single multiplex/transponder, but displaying it on… Read more »

@Jean-Luc Aufranc (CNXSoft) Thanks for the informative discussion. You are right that multi-streaming is not really in demand, but it is about the hacker ethic. Btw, TVH certainly does not run on Android. But I was talking about a TVH server (on Linux, say) streaming TS traffic to a Kodi frontend running on PC, Android, MAC, Linux, which will need the TVH plug-in. The individual channels in the TS stream can then be played in Kodi. Kodi also supports DLNA/UPnP so Kodi itself can also be used as a bare bones server to stream its local content to other media… Read more »