VideoStrong has become popular among people wanting an Android TV box with a tuner thanks to their affordable and customizable products such as K1 Plus T2 S2, or KIII Pro coming with DVB-T/T2 and DVB-S/S2 tuners. AFAIK, all there products so far came with a single demodulator meaning you could watch or record satellite or terrestrial TV, but not do both at the same time, for example watching a channel via DVB-S2, and recording one via DVB-T2. Amlogic S905D is supposed to support this, and upcoming products like Sen5 Android set-top box do come with two demodulators. Mecool KI PRO – based on the processor – has just been launched, pre-selling for $79.99 on Banggood with shipping scheduled for mid May. 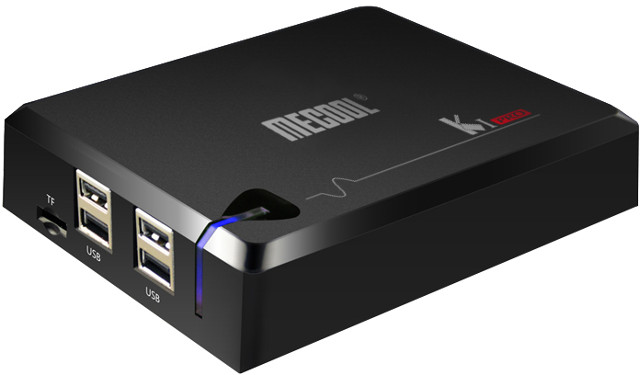 Another advantage of the device is that it runs the latest Android 7.1 operating system. The interface looks the same as with older devices, so I’d expect the same DTV app to be used in the box. KI Pro ships with a HDMI cable, a remote control, a power adapter, and a user manual. You may be able to find (more or less accurate) details on the manufacturer’s page.

Thanks to Natsu for the tip.

On vídeo strong page it also shows some dvb-c and dvb-c + dvb-s2 combo.

But i cant find those on any site.

Also dvb-t2 specs meets all the information and reqs for dvb-c. Does anyone know if that dvb-t2 does work with C (cable)?

On previous Unit here at cnx i saw some posts about dvb-c improve on newer app dtv on Android and tvheadend while in libreelec.

Any clue about this?

There is the latest DVB apk with support for DVB-C included.
It is coming straight from VS engineers

Hmm, do these things do ‘freesat’ properly? I’ve had one TV with a DVB-S2 but no freesat and it picked up every channel without prioritising my local broadcasts, e.g. Russia Today was channel 1, not say BBC 1.

In fact when you scan it follows sat order. And you can edit and sort channels by your self. But some pids change and etc. FTA channels are like this.

without native linux DVB drivers compiled for Android 7.1 as a generic option, and only a single app that talks the closed API in that DTV app… then it’s not going to sell on mass for use with the many 3rd party linux DVB apps and transcoders, streamers etc…

@Ygor Almeida
Except when I got a “proper box” later it had the localisation thing sorted, physically local channels appeared earlier in the list. That’s probably only possible with an online service for assistance. So do these boxes have access to one?

@CampGareth
There is a box on ebay uk claiming freesat in name but what it actually does who knows. It also runs Android 6.0

Is there a variant of this box that works with dvb-c? If so where/how can i order one?

Freesat is the trademark of a joint venture between the BBC and ITV and, as such, will probably not be available on these type of boxes. I have just set up (I was too lazy to bother before) a Wetek Openelec box running Tvheadend to show what appear to be the Freesat channels. EPG now starts on BBC 1 and runs through the UK channels in what appears to be a logical manner. http://forum.kodi.tv/showthread.php?tid=217719 This is for Tvheadend running as a backend and Kodi as the frontend. I have no idea what the boxes above will be running so this… Read more »

@CampGareth “Hmm, do these things do ‘freesat’ properly?” Freesat is a proprietary service using a proprietary EPG. so why do you expect a device which is not a licensed “Freesat” box to do “freeat properly”? As with all “free-to-air” (non-proprietary) boxes, you need to do a scan and then edit the resulting services according to your own preferences, or in the same order as the Freesat EPG if you feel compelled to conform to the dictat of the Freesat consortium. This may be inconvenient but the huge advantage is that you will be able to see all the extra free… Read more »

Freesat uses a proprietary EPG (and has lots of bouquets so that different areas get the right regional versions of channels on the right EPG channel number) It uses proprietary Huffman compression to carry EPG data. (As does Freeview HD – but not SD)

It IS reverse engineered (TV Headend supports it) – but i suspect selling products with support for it could be legally dubious, and is only relevant to the UK market.

My guess is that Wetek Play 3 would use S905D.
It’ll be commercial within a few months.

@Ron, from where did you get this info? Did Wetek3 will have Audiosound passthrough? Oherwise I will buy this cheaper Mecool…

@rebeL
As I wrote – this is MY GUESS.

It’s very probable. I don’t see why not!

To be more precise, , it’s rather logical to assume that it would have S905D-H (with HDCP for Netflix etc).

All these Single Tuner Boxes are pretty useless as Networked PVR setups for a Home TV viewing Network.
There simply are too many limitations when it comes to Recording and watching TV using a Single Tuner if you are using Multiple TV viewing clients at the same time.

@ovi
Good news. I guess it’s not with the default Netflix app, but the modified one so people can watch 720p Netflix.

Problem with gamepad Works well with k2 pro
As for k1 pro did not work problem driver
How to add it ?
Is there a new software ?

Anyone have this tv box for confirm that this information is true?

What tuner is inside?

@titou
yes, the first version is Android 6.0, now have updated to Android 7.1, and with DVB C

@linuxman
Miranda Chen works for Videostrong, so it’s true.
Now that does not mean, if you buy a KI Pro on the web today, it will have Widevine L1 and/or HDCP. Better wait to make sure those are standard features, since they cannot be added by software update.

im testing the nougat version for k1 pro and seems to work very nice.Waiting on Netflix HD app … VS engineers working hard to achieve it.

Yes you can update to android 7.1.1 with DRM widevine level 1.
You will need an USB to USB father – father cable and the amlogic burning tools

@Ovi
While upgrading firmware from Android 6.0 to Android 7.1 should not be a problem, I’ve been told (for other devices) that things like DRM and HDCP keys had to be set at the factory, and no firmware update would fix that.
If blackie is getting an earlier KI Pro without DRM, will he be able to update to DRM with Widevine Level 1?

Can be that the DRM keys are already included in the boxes available for pre-sale?
Or we have to wait until some “final revision of box” with DRM keys is released?
Does anybody know the answer or can some box owner check the DRM status with “DRM Info” application from Google Playstore?

@Jean-Luc Aufranc (CNXSoft)
Thank you for your hard work 🙂 Maybe you can review this tv box too?

@iptvDeluxe
TBH, I’m a bit bored with TV box reviews, especially tuner ones, as I reviewed 3 in the last few months, and the last one (U5PVR) is causing me some troubles due to issues in the first firmware that wasted a lot of my time.

But if somebody is interested in getting a free KI Pro sample, in exchange of doing a review on CNX. I’m all for it. Preferably somebody with a motorized satellite dish setup since I’ve never done that.

Interesting. I want to know too

i’d like to really check if the DTS HW decoding feature is there. anyone knows?

is the offering for a free sample to be tested still available? i have some knowledge about digital television, some spare time and a motorized dish too..

BTW i’m italian, so some kind of proofreading would be needed, eventually..

This does NOT mean Widevine Level 1 DRM support. And I doubt this box will ever have it either.
And I seriously doubt HDCP will ever come with these cheap boxes – that costs money and the profit margins on this type of hardware do not justify it.

Be aware those looking for 1080p Netflix – there is no way it will work on this box. You need actual Netflix Hardware Approval and I’ve never seen Cheap Chinese sourced AMLogic boxes come with Netflix approval.

yes, Android 6.0 update to Android 7.1, need to use USB to USB father – father cable and the amlogic burning tools
New KI PRO is with widevine level3& level 1, comes with HDCP key and HDCP key burned at factory,
They are producing now, haven’t on sale somewhere, will come soon…

@Miranda Chen
Hi, Miranda Chen
We would like you to let us know here when these new boxes are on sale. Do you have an approximate date?
Also how can we differentiate the new ones with level 1 from the old ones to level 3
Thanks.

@namecito There is an flash sale on gearbest for this box happening now [1] but not much of an discount if compared to the price ( $80 ) posted here in early May ( would have expected $60 to be a flash price ) and similar price on the device on geekbying as well [2]. There is also a youtube review here [3] but not a teardown which might have highlighted if the device had to be so bulky in design ( too bulky for my taste to have in the living room compared to other tv boxes slick design… Read more »

@peterpan
But does have gearbest box level 1?
Thank you

@Stanner
Hi, I think your box didn’t support HDCP, when it’s ready, I will publish here 🙂

@namecito
Hi, I think this two weeks the last software will be ready, to differentiate the new ones with level 1 from the old ones to level 3 could check the sw version, the new last sw will be June, not May.

Then same hardware but different firmware? The same version of hardware board?
So, Can I buy now and upgrade with the new firmware to have it?