If you are on the lookout for an inexpensive 4G phone, Cubox X18 Plus smartphone with a Mediatek MT6750T processor running Android 8.0, a 6″ display, 4GB RAM, and 64GB flash may be worth a look as GearBest offers the device for as low as $79.99 shipped. 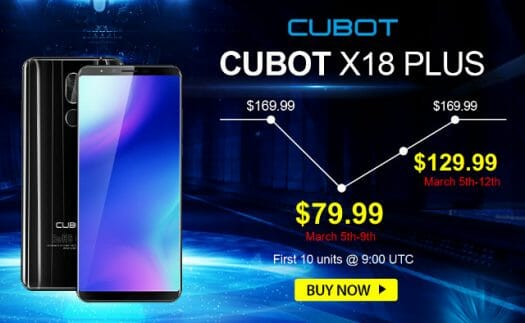 The phone runs Android 8.0, and ships with a power adapter, a USB cable, and back case.

In case you don’t usually enjoy the frustration associated with flash sales, but still wants a cheap 4G smartphone, Geotel Note 4G could be an alternative for $80.99 shipped on Aliexpress. The specifications are not quite as good though, since you’d be limited to a Mediatek quad core processor, 3GB RAM, 16GB flash, a 720p display, standard rear and front-facing cameras, and the older Android 6.0 operating system. The Geotel phone has close to 250 orders, and feedback from users is usually good considering the price.

And always keep in mind that your cheap Android phone might ship with Trojan horses already pre-installed: https://news.drweb.com/show/?lng=en&i=11749&c=5

Well, if it shipping with android 8.0 and GApps suite, it should supports treble, which means that it is relatively easy to port AOSP-based firmware for it.

Because CNX and other websites advertise such low prices in the title and only later in the text reveal the ridiculously low quantity available at that price sellers unduly profit. IMHO shame on CNX…

@LinAdmin
Why shame on CNX? Shouldn’t it be shame on the seller? What did CNX do wrong apart from let its readers know that there’s a deal going? And usually if a deal is too good to be true, it is.

@TLS
CNX knows that, the readers know that, so why make it title worthy? You could list the normal price in the title and in passing in the article mention the promotion. Would it be ethical to say every product ever mentioned is free, but only if you win the lottery on your first go beforehand?

“as low as” in the title, not hard to understand that it may be pot luck if you get it at the mentioned price..

@–
IMHO this website has a good reputation about _serious_ information. Does it really need to echo the click baiting strategies of some crazy shops? If it does so I will deactivate the rss feed and find a better source of quality information, and so will others do without complaining here.

@LinAdmin
For time or stock limited promotions like this (in this case 50 pieces @ $80), I include “(Promo)” in the title. So you can always skip this type of post.

I’ll continue posting this type of promotion even as while a few complain every time, it’s useful to some other people. A while ago, I wrote about Khadas VIM 2 for the same type of promo, and at least one person managed to get the Max version for $49.99 (If I remember the price correctly). More people also benefited from a $4 Orange Pi One promo.

Why do you need censorship???