MeLE PCG02 was introduced in 2015 with an Intel Atom Z3735F Bay Trail processor, and was one of the rare Windows TV sticks to include an Ethernet port. Later on, the company also launched PCG02U model with Ubuntu 14.04 instead. 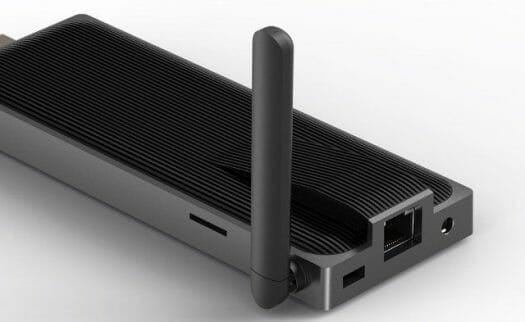 MeLE PCG02 Apo comes pre-loaded with Windows 10 Home 64-bit, and there does not seem to be an Ubuntu version in the works. The stick ships with a power adapter with exchangeable plugs following GS (Europe), UK, SAA (Standard Association of Australia),  and UL (US/Canada) standards.

a bit pricey, especially considering Gemini Lake is now the standard low-end SoC for these kind of devices.

Ah, a PSU is part of the bundle so hopefully they use the new USB PD compliant Micro USB jacks and receptacles (that should withstand 3A unlike normal Micro USB parts rated for 1.8A max)

It doesn’t look safe for the HDMI port….

Those two don’t work well together.

Wonder what the heat dissipation is like. No mention of a fan.

No HDMI port could safely hold it in place

They should sell it for what it is: a TV box.