I called the platform GIGABYTE Synquacer at the time, because GIGABYTE helped with the design, and the platform was called Synquacer, even during the demo at Linaro Connect.

I wanted to find out if there were now updates with regards to software support, availability,  and pricing.  While searching for the product page, I found out it was now called “Edge Server SynQuacer E-Series“, and while GIGABYTE designed the board, they will probably not use their brand for this Arm PC, since it’s mostly a development platform, and not quite suited for end users. 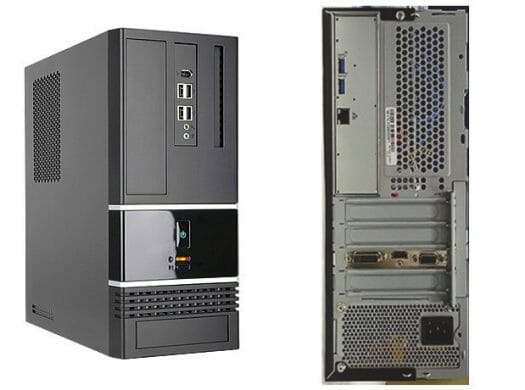 If you wonder about power consumption, while the chip is rated at 5V, the whole system consumes around 30 Watts at idle, and during the person detection demo at Linaro Connect with Gyrfalcon mPCIe it went up to 40 Watts.

Linaro/96Boards guys actually appear to refer to the thing as Developerbox as that’s what it is called in the Github Wiki,  where you’ll find documentation to get started with the platform. An assembly guide is also provided, as you’ll have noticed from the specifications, the kit is not just comprised of the motherboard and chassis, but also ships with a 4GB DDR4 U-DIMM module, a 1TB WD hard drive, an ASUS GeForce graphics card, as well as necessary cables (SATA, 3x power),  an I/O shield, and some manuals.

So where can you buy the kit, and for how much? Socionext Developer Kit is sold on Chip1Stop website for $1,250 and ships from Japan. Stock appears to be limited to 10 pieces, but at that price, only people who really need it will likely purchase the kit.

Sad that it has slow A53 1.0ghz cores only. A pair of A72’s would have made this usable as a workstation and build server… but 1ghz in-order is useless for modern development environments 🙁

Not if you increase core count to 500!
But yeah, as is, neonverse cores make more sense.

i wonder how much u can OC that chip

I wonder where they found that antique case? It has a FireWire port, yet the board doesn’t seem to support it…
Also, two Ethernet ports on the board, one on the rear I/O?
And why not source the graphics card from Gigabyte as well, when they made the motherboard, instead of going with Asus?
This all seems like a bit of a bad joke.

@TLS: The upper picture is from the previous article and the lower seems to be taken from the assembly guide PDF where you find a lot more pictures of the (hopefully) current enclosure.

According to the assembly guide only one of the LAN ports is functional. And it looks like CPU’s heat dissipation can be easily improved with some foam parts controlling the airflow between front inlets and PSU fan.

If this could come at an effective price then the cryptomining companies could get excited.

No wonder gigabyte does not like to be associated with it as they try to make completely different beast based on ThunderX2: https://www.prnewswire.com/news-releases/gigabyte-announces-thunderxstation-industrys-first-armv8-workstation-based-on-caviums-thunderx2-processor-300616517.html

enterprise nvme ssd’s are all m.2 form factor or other ruler sizes. What are my options to get optimized storage into this?

Which operating system is supported?

Why in the world did they put in a GeForce card? Does Gigabyte have too much of those lowend crap GPUs, Nvidia forcing them to buy the chips to get allocation of the in-demand new stuff, or what?

Given the chasm that exists between Radeon open source driver support and what is available for GeForce, this is just dumb.

For reference, one can get a MacchiatoBin with 4GB DDR4-2400 (capped at 16GB w/ ECC) for $1K less. Sans the enclosure and the GPU, but with 2x 10Gb SFPs extra. If only SolidRun could do something about their lead times : /

@Riccardo added Linaro Connect video and they talks about OS a bit more.
Debian 9, CentOS 7.4, Fedora 28, and Ubuntu 18.04 are supported.

@David Marceau: It’s an ASM1061 or ASM1062 (PCIe attached SATA). If only single lane attached then good for HDDs but already bottlenecking SSDs. The whole ‘package’ with a HDD (WTF?) and shipping with a bulky enclosure makes no sense at all anyway so why bother?

Idle power consumption is quite high. They still need core deactivation soft or hardware. This makes this PC only interesting at a full load (compute). However, a 10W difference between idle and load is pretty useless. If I were them, I’d redesign the board to host at least 4x the cores. A 90W at the wall under load makes much more sense. In fact, I wished they would ramp up the cores until the system runs at similar than desktop PC values. I regularly see 200-300W numbers on my PC equipped with an RTX 2060. Can you imagine at 5W… Read more »