Star Cloud PCG02U is the first Ubuntu product from MeLE. After taking a few pictures of the TV stick and the board, I’ve tested the performance and functionality of the device.

You can either connected the stick directly into an HDMI port, or using the provided female to female adapter via an HDMI cable. I’ve opted to insert the device directly into the AUX port of my Onkyo A/V receiver itself connected to my TV. Since there’s only one USB host port, USB keyboard and mouse are not convenient since it would add a USB hub, so I went with Logitech MK270r wireless mouse & keyboard combo instead. You can either used Ethernet or WiFi for Internet connectivity, and I opted for the latter for most of the review, but WiFi is also working fine. 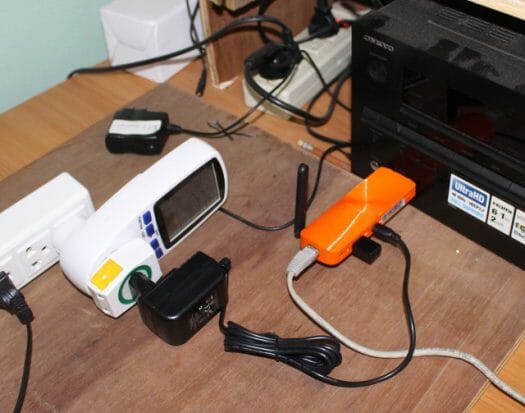 The final step is to connect the power supply into the micro USB port, and boot the device which takes around 20 seconds. Power consumption is a low 3.4 watts in idle mode, and 0.4 watts while powered off. The system automatically login to Unity desktop shell with user “pp” without password. But if you do need to perform some administrative tasks as root, pp password is 123456. 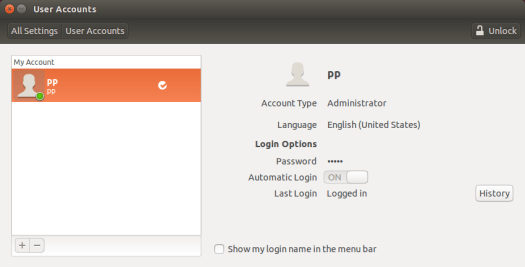 So you’ll probably want to go to “User Accounts” to Unlock the settings, and either add a password to pp, or create a new user. 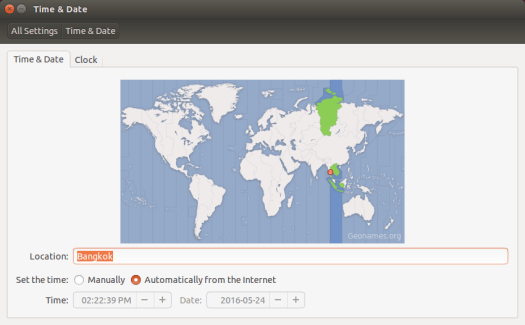 Time is set to New Year by default, so I changed that to match my local, as well as the Clock setting to display the time using a 24-hour clock, instead of the default 12-hour clock. 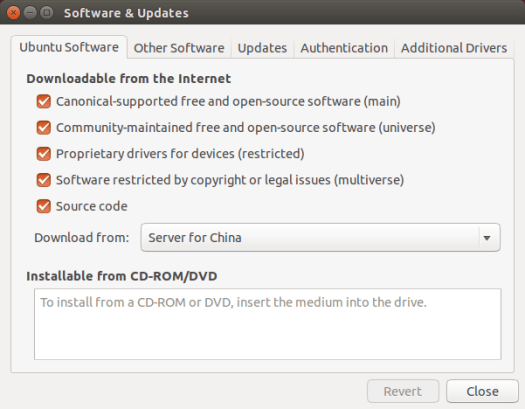 The download server for updates is configured to use servers in China by default. This  will likely be slow in most countries, so you’ll want to select a server for your country, or simply use the “Select Best Server” feature. 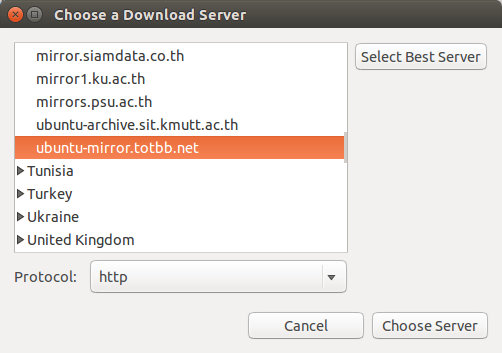 I also disabled “Online search” and removed “Amazon” icon from the dashboard.

I completed the initial setup by installing the latest updates as well as OpenSSH server:

Now that I have a system configured to my taste, let’s check some of the system information from the terminal start with Ubuntu and Linux kernel versions:

It’s not surprising that they went with Linux 3.16 since it was the only option to get HDMI audio until recently. MeLE did use Linuxium image possibly with some modifications.

MeLE also created pp user, but I’m not sure they did other improvements.

I still had 20GB free storage after installing the latest upgrade, with LibreOffice and Firefox pre-installed.

You can only see 159 MB free memory, simply because of lot of it is used as buffer/cache, not because Ubuntu is about to run out of memory.

cpuinfo show four cores, but I’m only showing one below. 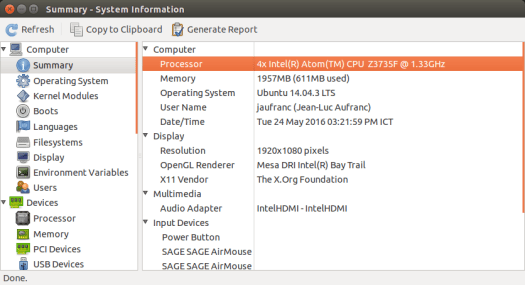 I’ll first use Phoronix to benchmark the TV stick.

Before running the same benchmarks that was run on several ARM Linux development boards.

You can find the results on openbenchmarking.org, but as the tests were underway, the temperature seemed under control never going above 79 C, and I soon realized that the governor was setup to “Powersave”, so I changed that to “Performance”, and ran the tests again.


So finally we have the results for both lowpower and performance governors, and the results are not that much different. Let’s see some of the results compared to  ARM boards. Please note that “MeUbuntu 14.04.3” is actually the test for PCG02U in powersave mode.

First Star Cloud PCG02 is faster than ARM boards in some, but not all of the tests. 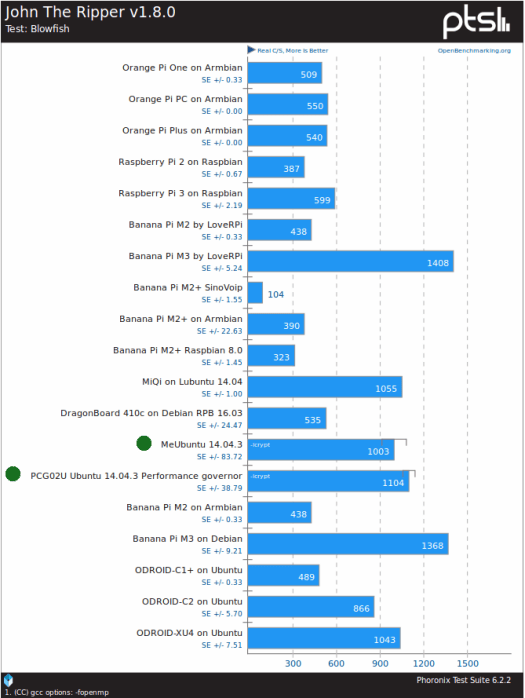 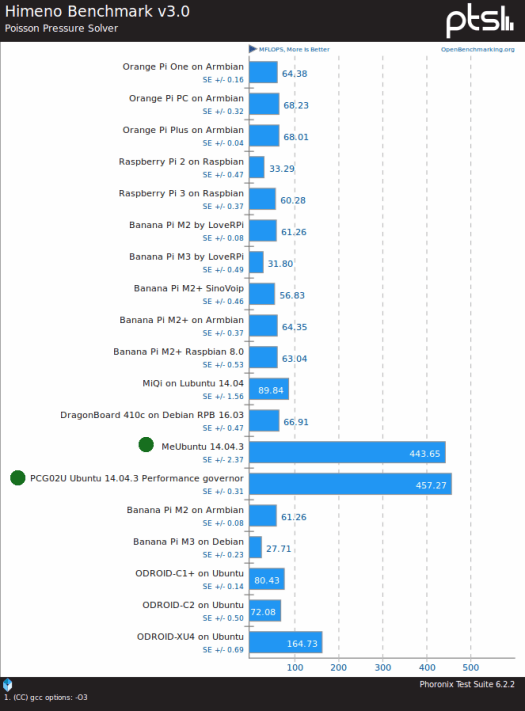 But Himeno benchmark is way much faster on Intel than ARM. Himeno page mentions that version 1.2.0 “use AVX2 by default if available”, so while the test still used version 1.10, and I did not find x86 optimization in the source code, it’s quite possible the compiler makes use a SIMD instruction on Intel, but not on ARM, or that ARM NEON is not quite as good as SSE2, AVX… instructions on Intel processors. 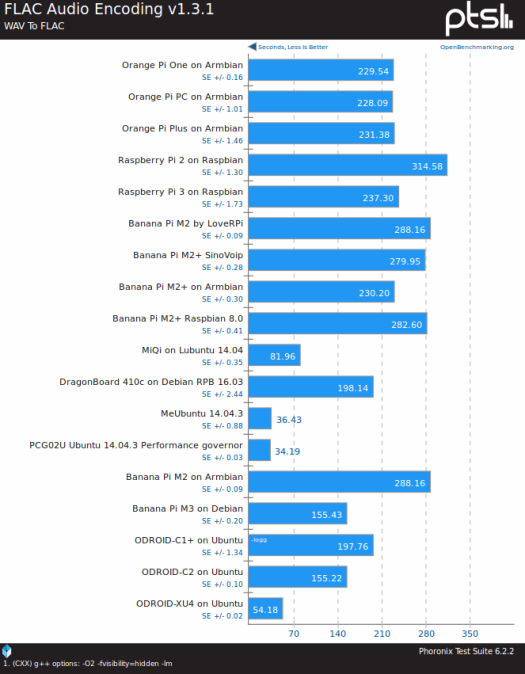 FLAC audio encoding is also confirming the better performance of the Intel platform here, although the gap to ODROID-XU4 is not as wide as for Himeno benchmark. Audio encoding would also benefit from SIMD instructions so that may explain it.

I tested both Ethernet and WiFi with iperf.


I repeated the test with WiFi in one direction only, and the connection seems pretty good too:

I install IOZone to benchmark the internal flash.

Random read @ 121 MB/s and write at 70MB/s is not too bad, but I can’t explain why they are random I/O are faster than sequential ones, so I repeated the test again with basically the same results.

I did two more runs with a larger file to test sequential read and write speed more accurately.

In the final part of the review, I’ve test some common apps including:

You can watch the user’s experience in the video below.

Basically, I’m very happy with the performance of the device for desktop tasks, as everything worked smoothly. Video playback in YouTube and Kodi 16.1 ws not 100% perfect though, but still watchable, and finally SuperTuxKart ran pretty well at around 25 fps.

Overall, I’ve very satisfied with MeLE PCG02U TV stick, especially considering the $70 price tag, and you’ve got a fully working Ubuntu device suitable for desktop tasks, although multi-tasking should probably be limited due to the 2GB RAM. I’d like to thank MeLE for providing the sample, but we should also thank Linuxium for his work on the Ubuntu for Intel Atom Z3735F devices. You can currently purchase Star Cloud PCG02U for $69.76 including shipping, except for resident of the United Stated, Canada and Mexico, because MeLE has an agreement with another reseller targeting business consumers.

Finally sounds like a really decent usable device. But how long before “Bay Trail” processors run out?

Small note on the storage bench (thx for using iozone). When I tested a bunch of SD cards a few weeks ago I made the experience that Samsung cards (be it EVO, EVO+ or Pro) were always pretty slow if they weren’t in use for some time and got faster the 3rd or 4th benchmark run (maybe the card’s controller is doing some calibration?). Maybe you experienced the same and therefore random I/O seemed to be faster in the beginning since calibation or whatever is responsible for that already happened when testing sequential transfer speeds? BTW: Monitoring Atom boards using… Read more »

I bought one and just received it today. I still have to try it, I’m glad it is a positive review. Hopefully the kernel patch for the hdmi sound will reach mainline kernel.

Off topic: does somebody know where to buy such a sata enclosure with integrated usb-hub: http://orico.cc/goods.php?id=6286
doens’t seem to find a online resseler except amazone (=expensive shipping to belgium)

Just to add that I wasn’t aware of the use of my ISO nor am I involved with this device/product/company.

Is there a similar device with 1gbit NIC? I’m getting 200/200Mbit optical line at home soon.

But if you’re asking about a TV stick with Gigabit Ethernet, then I can’t think of any. You’d need a stick with USB 3.0, coupled with a USB 3.0 Ethernet dongle.

@Roel
I can’t find the exact model but Orico has Ebay and Aliexpress shops. Maybe ask them when they’ll start selling they HDD + USB hub enclosure.

Got one of these today, could have done with reading this article earlier as it took a few guesses before I worked out the password. Overall I really like it, I’m a fan of the design and the packaging was professional. Price is good. Perf wise ok for the most part (it runs screencloud fine) but the only thing missing is when I installed chrome and went to chrome://gpu I noticed its not doing hardware video decoding. I tried a bit of googling and a few things but so far haven’t been able to resolve. Has anyone been able to… Read more »