Fairwaves is a startup that aims to make deploying and operating mobile networks in rural regions profitable, and their latest project is called XTRX, a high performance Software Defined Radio (SDR) board packed into a mini PCIe card form factor.

The project was launched on Crowdsupply earlier with year, got fully funded by around 700 backers, and the company is now working on fulfilling backers rewards by the end of August. 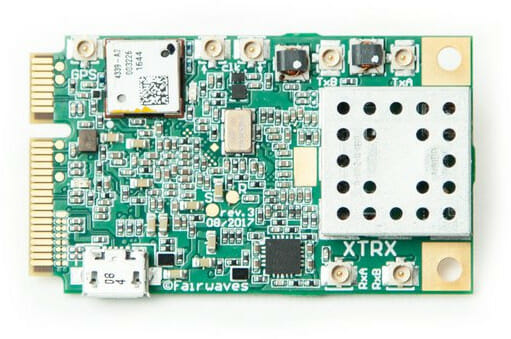 Some accessories are also available for the board including antennas & cables, a USB 3 adapter with aluminum enclosure, a PCIe x2 + front-end adapter, and a PCIe octopack, which enables synchronization of multiple XTRX boards (up to 8) for “massive MIMO” deployment.

Documentation, and source code can be found in xtrx-sdr Github account,  where you’ll find connector pinout, 3D models, pre-built binaries, a getting started guide, and modified open source applications such as SDRangel,  osmo-trx,Kalibrate, and gr-osmosdr.

Potential applications for the platform include bandwidth monitoring (up to 1 GHz of bandwidth with 8 XTRX cards), software defined 2G/3G/4G/LTE cellular modems,  DSP acceleration, and various use cases for drones and embedded systems.

The crowdfunding campaign is over, but Crowdsupply allows for pre-orders afterwards, so you can now pre-order a XTRX revision 4 board for $260 without any accessories. Other rewards include the $515 XTRX Deluxe Bundle with the mini PCIe card, cables, USB 3.0 enclosure and PCIe x2 + front-end adapter, or the complete 8 boards Octopack for $2,900.

This is very approachable on several fronts. It’s only got 35k cells in the Artix, but it should work out nicely enough Price-wise, this is a gem for what they bring to the table. It should be noted that for the cost of a bit of your cells and RAM you can easily and readily have an Embedded RISC-V CPU on the fabric of the FPGA if you’re needing that sort of thing.