The ODROID Ubuntu image comes with the following key features:

The company sent me a kit based on ODROID-XU4Q board to review Ubuntu 18.04 on the platform, so I’ll write a more details review after the coming week-end. I’ve done some quick test already with the beta image, and it looked to be working well with GPU acceleration, and I could use same eMMC module on ODROID-XU4Q and my older ODROID-XU3 Lite board without any modifications. I did learn something however: Firefox 32-bit is now supported anymore (on Arm?).

If you are already running Ubuntu 16.04 on your board, you can upgrade with the usual command:

Alternatively, you can download the image, and flash it with Etcher.

If you own Amlogic based ODROID-C2 or ODROID-C1+, Ubuntu 18.04 is also coming, but you’ll need to wait a little longer, as the release is planned for June. 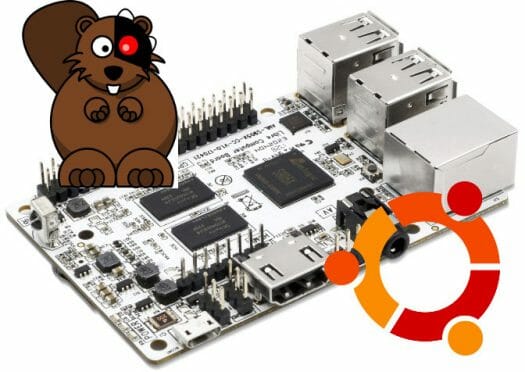 Hardkernel is not the only company to have released an Ubuntu 18.04 for their board, as Libre Computer announced the release of Ubuntu 18.04 “Preview Image 1” for their AML-S905X-CC “Le Potato” board using Wayland compositor.

Canonical is not using Wayland by default, but BayLibre did some work related to GBM (Graphic Buffer Management) that allows the use of Wayland on the board (and other S905 boards).

The image is still work in progress, so if you need stability keep using the Ubuntu 16.04.4 image for now, but if you want to experiment with Ubuntu + Wayland, go ahead. The very first boot is said to take around 5 minutes, but once it’s complete, you should able to select Ubuntu on Wayland, and try some 3D demo apps:

If you check the link about GBM, I can see the have a LibreELEC image with Linux 4.16 “mainline”, so I assume mainline Linux for Amlogic S905 is now usable.

Awesome :D, thanks for the clarification! Best case, that would mean that LibreELEC could be released with one unified kernelversion…

BayLibre posted a post about their work on Linux 4.16, where they say “This release is important since it’s the first Linux release that can boot an Amlogic SoC with graphics with u-boot mainline, both unchanged !”.

Libre Computer worked with BayLibre to get many pieces for S905X/GXL upstreamed while Martin Blumenstingl did a lot of work for S905/GXBB upstream including lots of USB improvements. Video decoder and 3D on mainline is being worked on but very far away.

Just a note on the Odroid XU4 (hardware) video decoder: it’s not limited by resolution, but performance is limited to the equivalent of [email protected] This means that it can decode H264 [email protected] with no issue. Obviously there is no 4K HDMI output, so the result has to be scaled down to 1080p. The hw scaler is not supported in ffmpeg (it is in gstreamer), but kodi can use the GPU to scale with good perfomance so [email protected] H264 should be ok.

For the RK3288 based Asus Tinkerboard:
http://www.elar-systems.com/website/index.php/entertainment/member-area/download/2-downloads/23-asus-tinkerboard-lubuntu18-04-lts-elar-systems-sd-v1

For those interested, I’ve tested Ubuntu 18.04 on ODROID-XU4(Q) board.