Cameras may be used to take holiday photos, but when integrated into robotics projects there may purpose is usually to detect objects and/or patterns. We’ve previously covered specialized computer vision camera such as the Linux based JeVois camera powered by Allwinner A33 processor,  HICAT.Livera machine vision board, or STMicro STM32F7 Arm Cortex M7 powered OpenMV Cam M7 open source computer vision board.

Another popular option is PixyCam PIXY camera that was first launched via a Kickstarter campaign in 2013. The company has recently introduced an updated version, aptly named PIXY2, which can still detect objects – just faster at 60 fps-, and also includes new algorithms to detect and track lines or barcodes. 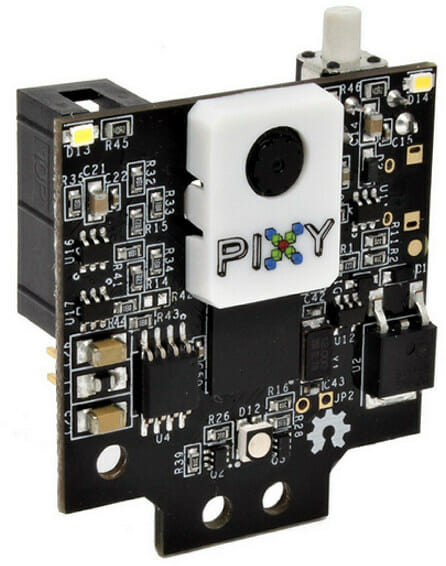 The board can learn to detect objects that you teach it, can connect to Arduino port with provided cables, as well as Raspberry Pi, BeagleBone Black, and other Linux boards. Libraries are provided in C/C++ and Python, and the configuration utility works with Windows, Mac OS, and Linux. Both the software and hardware design are (mostly) open source with resources provided on Github.

You’ll find plenty of projects for the PIXY / PIXY2 camera on their website, as well as documentation in the Wiki. The new features listed for PIXY2 include:

I first found PIXY2 in Seeed Studio, where they sell it for $59.90 plus shipping, but you’ll find the camera on other shops too, including Amazon and eBay. A Pan/Tilt2 Servo Motor Kit for Pixy2 is also sold for $29.90. For more details, visit the product page.