Linus Torvalds has just announced the release of Linux 4.18:

It was a very calm week, and arguably I could just have released on schedule last week, but we did have some minor updates. Mostly networking, but some vfs race fixes (mentioned in the rc8 announment as “pending”) and a couple of driver fixes (scsi, networking, i2c). Some other minor random things (arm crypto fix, parisc memory ordering fix). Shortlog appended for the (few) details.

Some of these I was almost ready to just delay to until the next merge window, but they were marked for stable anyway, so it would just have caused more backporting. The vfs fixes are for old races that  are really hard to hit (which is obviously why they are old and weren’t noticed earlier). Some of them _have_ been seen in real life, some of them probably need explicit help to ever trigger (ie artificial delays just to show that “yes, this can actually happen in theory”).

Anyway, with this, the merge window for 4.19 is obviously open, and I’ll start pulling tomorrow. I already have a couple of dozen pull requests pending due to the one-week delay of 4.18, but keep them coming. 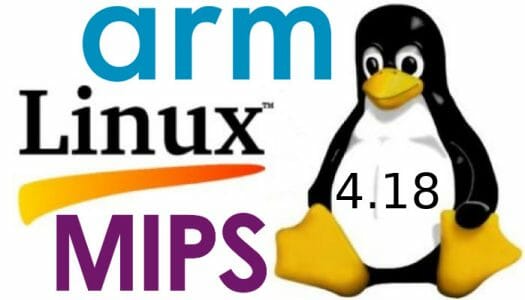 Some of interesting changes for Linux 4.18 include:

Support for the recently released Qualcomm 845 processor is only basic however, as noted in the log:

So far, you can’t do much with it, since a lot of peripherals are not yet in the DTs but driver support for USB, GPU and other pieces are starting to trickle in. This might end up being a well-supported SoC
upstream if the momentum keeps up.

A longer summary of MIPS changes:

For more details, you can check the full Linux 4.18 changelog generated with git log v4.17..v4.18 --stat, or read a summary of changes on KernelNewbies.

As I understand it, it was not used in any actual product, so they had no reason to keep maintaining it.