Freescale i.MX 6 processor was first announced in January 2011, and in the first few years I covered many products and development boards based on the single to quad core Cortex A9 processor. Further down the road, the company became part of NXP, and launched Cortex A7 variant such as i.MX 6ULL providing both lower costs and power consumption. But now, I usually skip new products based on i.MX6 because they are often just more of the same, and not really new worthy.

But yesterday while writing about Linux 4.20 release, I realized I missed the announcement of i.MX 6ULZ processor similar to i.MX 6UL (UltraLight), but cost optimized for applications that do not require Ethernet, display, nor camera interfaces. 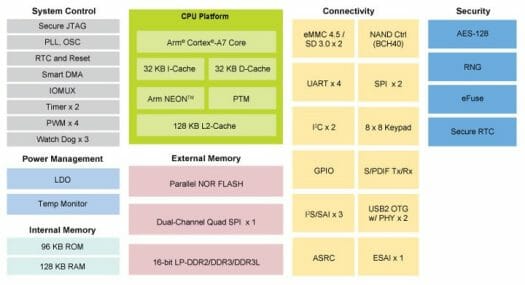 NXP i.MX 6ULZ key features and specifications with differences with i.MX 6UL highlighted in bold or :

So beside dropping multimedia features,  and dual Fast Ethernet, NXP is lower the number of I/Os, as well as optional security features if the block diagram is accurate. Yet the package is still the same 14 x 14mm area with 0.8mm pitch. However, I cannot confirm whether i.MX 6UL/6ULL/6ULZ are all pin-to-pin compatible. The maximum Cortex A7 core frequency has been boosted to 900 MHz from 696 MHz.

The product page points to iMX 6ULL evaluation board pictured above for i.MX 6ULZ software development, but the mainline Linux kernel log points to support for i.MX6ULZ 14×14 EVK reference board, which should be another board. Another upcoming hardware is Variscite DART6-ULZ system-on-module that was expected to launch in Q4 2018, but there may have been some delays.

NXP i.MX 6ULZ is already listed for sale with MCIMX6Z0DVM09AB part going for a little above $3.30 per unit for 152 pieces orders.

This is pretty good. Add a wifi module, spi nor and a little DDR and you have something that works for the majority of IoT applications for probably not that much more than a Cortex M module based module from Azurewave etc.