AMD recently introduced the “new” AMD A6-9220C & A4-9120C low power processors specifically designed for Chromebooks. As pointed by CNX Software readers, AMD A6-9220 & A4-9120 processors (no “C”) have been around since 2016, and the just announced “C” (Chromebook) versions appears to be the same processors but with lower clock speed to meet the 6W TDP requirement.

Two Chromebooks based on the new AMD processors – HP Chromebook 14 and Acer Chromebook 315 – were also showcased at CES 2019, and the former is now sold for  $269.99. HP has already announced another AMD Chromebook with a smaller 11.6″ display: HP Chromebook 11A G6 EE (Education Edition). 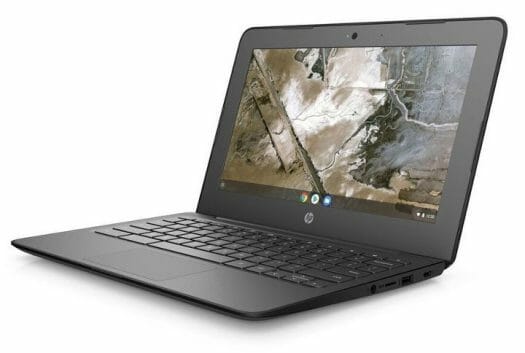 This model is expected to launch in February with the following specifications:

The price is still unknown, but the company also offers a very similar Intel Celeron N3350 Apollo Lake model called HP Chromebook 11 G6 EE, which should have similar performance, and is now sold for $269.99, so we may expect HP Chromebook 11A G6 EE to be sold for a few dollars less.

There’s also HP Chromebook 14A G5 expected in April with 1366 x 768 pixel or 1920 x 1080 pixel IPS display, and optional backlit keyboard, but the details specifications will be available at a later date.

An absurd price for an 11.6 inch Chromebook, if you ask me.