STMicro unveiled the first STM32 microprocessor – as opposed to microcontroller – earlier this week with STM32MP1 adding one or two Cortex-A7 cores running Linux to the Cortex-M4F core usually found in STM32 microcontrollers. The company also announced their own evaluation kits and discovery kits but promised a 96boards compliant board and system-on-module would be showcased at Embedded World 2019.

But Arrow Electronics has already released some limited information about a 96boards CE extended compliant STM32MP1 powered SBC called Avenger96 and that happens to be designed with a baseboard and an STM32MP157 system-on-module. 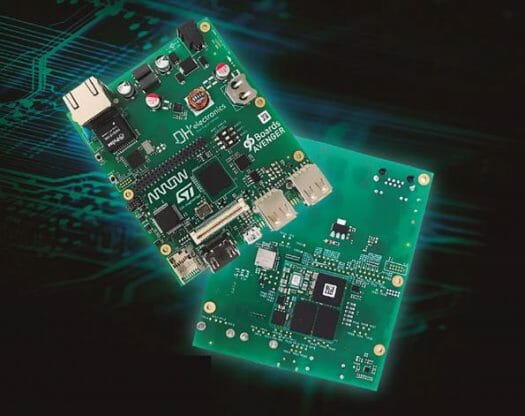 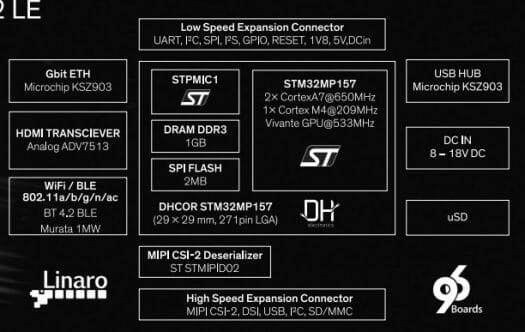 The board will be supported via a fully mainlined Open Source Linux Distribution supported by Linaro, and integrate with STM32CubeMX to ease and speed up heterogeneous system design. It will also benefit from access to hundreds of add-on cards from 96Boards ecosystem, and facilitate the switch from development to production thanks to the SoM which can be transposed to the final product.

Arrow did not reveal the details about the SoM but simply mentioned the board was developed in collaboration with DH Electronics. Browsing the company website a few seconds quickly revealed the new DHCOR STM32MP15x system-on-module that is clearly used in Avenger96 SBC, and upon second look is even mentioned in the block diagram above. DHCOR STM32MP15x comes with STM32MP157 MPU, 1GB RAM, 2MB SPI flash, and STPMIC1, meaning other components like the wireless module and eMMC flash are placed on Avenger96 baseboard.

The module measures just 29×29 mm, and must be soldered to the board, i.e. no board to board connector, since it comes as a 271-pin LGA package identical to the company’s DHCOR i.MX6UL(L) module pictured below. 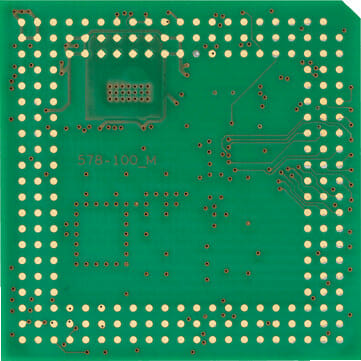 Availability and pricing for Avenger96 board and DHCOR STM32MP15x SoM are no known yet, but I’d expect them to become available in a few weeks around the same as STMicro’s EVB and discovery board. More details should eventually surfaced on the product page that’s more of a teaser at this point.

Via LinuxGizmos and EENews Europe

I like the principle of board-to-board modules like this. It avoids the height caused by connectors, the sensitivity to vibrations that sometimes results from poor contact between connectors, reduces cost, but still allows the board designer to only focus on I/O signals. Other vendors used the same principle with AR9331 devices using castellated connections on the edge, just like we have with ESP8266/ESP32 modules. This could really boost such modules’ adoption into various consumer products.

I’m curious, the STM32MP157C-DK1 has HDMI, but it’s seemingly only for HDMI-CEC control, not video, so how have they managed to get HDMI out on this board? The STM32MP157 also seems to be limited to 1366×768, so I guess this would be a limitation in this case too. Obviously there’s no mention of resolution support so…

The STM32MP157C has a LCD-TFT display controller and the ADV7513 is used to convert this to HDMI. For HDMI I’m guessing the max resolution will be 720p if audio is available other can be configured for DVI output.

Looks like primary core on this SOC is the A7 and you need to wait for linux (not sure about uboot) to boot before uploading firmware on the M4 and starting it. Very similar to the i.m6sx/i.mx7 processors with peripherals having to be assigned to each cores.