Both Rockchip and Amlogic have some pretty interesting processors coming down the pipe with for example Rockchip RK3588 Cortex A76/A55 or Amlogic S922D Cortex A73/A53 SoCs both featuring an neural processing unit (NPU) for AI workloads acceleration at low power. The companies also have updated entry-level quad Arm Cortex-A55 processors with RK3530 and S905X3 models which are planned to launch later this year.

But this made me wonder what was going with Allwinner since the company got really quiet, except for the “launch” of renamed processors for a specific business unit. That’s the only company among the three to have yet to announce a Cortex-A7X 64-bit Arm processor. 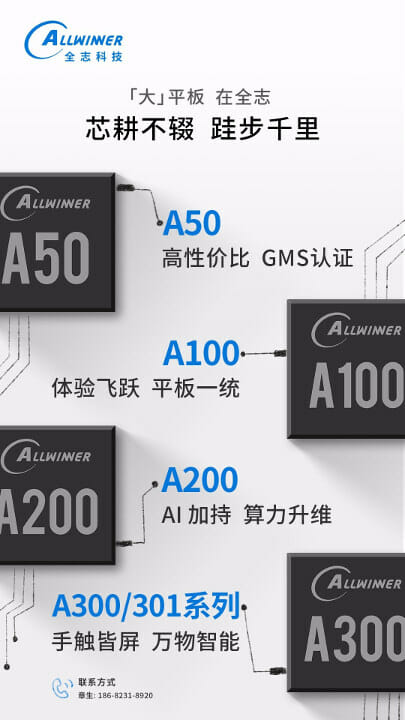 Except for posts with typos, a search for the new processors do not return any results. At least that means we should have affordable tablets with higher performance later this year, or next.

A50 seems to be A33 with amlogics fake MHz tech… all in all no news just numbers.

Nope, A50 is the same as MR133 (much more sophisticated than A33). BTW with latest Allwinner SoCs advertised clockspeeds were real (for example H6 @ 1.8 GHz @ 28nm)

Honestly I didn’t read the specs but 4x A7 triggered this cheap joke.
I hope those many uninteresting new SOCs won’t scatter the sunxi guys too much…

1. Find a core that is new enough to promote as something new.
2. Chuck it in whatever suite AllWinner do their chip design in and mix it with the same standard set of TV box cores they’ve been using for years and maybe something cool sounding like an AI co-processor that’ll never have useful software support.
3. ????
4. Profit? Maybe? The tablet market is dead isn’t it?

https://github.com/allwinner-zh/bootloader/tree/master/basic_loader , but that would be a reason, why Allwinner is this small step in front of e. g. Amlogic (or Samsung for security reasons because of trust zone concept) considering ‘open source’ customer support?

Some old code dumps isn’t really embracing the opensource world. You can go and buy the SDKs for weird Chinese SoCs for a few bucks and get source like that, their horrible uboot and linux ports etc.

Thx for sorting out.
Going on with prejudices to revise?
https://en.wikipedia.org/wiki/Broadcom_Corporation#Philanthropy

Best ebook SoCs on the market.

No joke. Short of a full static core which no one has, the A50 has just enough compute to do a decent job at handwriting recognition with almost no useless graphics capabilities that would prevent an open source libre kernel.

Throw it on an 8″ eInk and make it work with mainline debian and I’d buy one without batting an eye.

I’m waiting for the rumored V5 successor. The V5 has a really good camera system, but AW got unlucky when they picked HAAR for AI. A discovery a couple of years ago caused CNN to far outperform HAAR. The V5 successor is rumored to have same camera subsystem but swaps the HAAR AI for CNN AI. All of these recently announced AI coprocessors from other vendors are for CNN.