One year ago, Facebook introduced their very first standalone virtual reality headset with Oculus Go. At $199 the price was fairly attractive, but the headset only supported 3DOF motion tracking.

The company announced a new model at F8 2019. Oculus Quest is equipped with a more powerful Snapdragon 835 processor, two 1600 x 1440 displays, and support for 6DOF (degrees of freedom) virtual reality thanks to two handheld motion controllers. 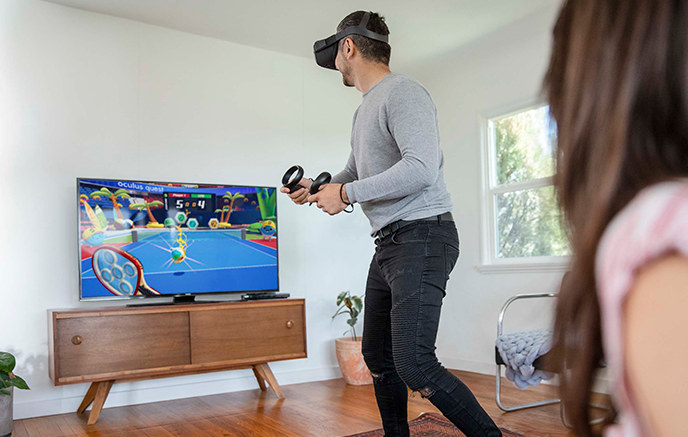 Oculus Quest is said to support over 50+ titles from shooters to pass-and-play social games, and 5 preview demos are preloaded in the unit: Beat Saber, Creed, Journey of the Gods, Space Pirate Trainer, and Sports Scramble.

The company also added a casting features so that other people can also see what you do while playing, somewhat improving the “social experience” as shown in the photo above.

Oculus Quest can be pre-ordered for $399 (64GB storage) and $499 (128GB storage) on Amazon US, Oculus Shop, or other resellers. Shipping is planed to start on May 21st. Several larger technology blogs had the chance to review Oculus Quest before the official announcement including The Verge, Engadget, and CNet. Reviews are fairly positive especially about the wire-free experience, but it’s heavier than PC based models, and cannot handle as many VR games. Facebook also announced Oculus Rift S that needs to be connected to a computer together with Oculus Quest. You’ll find the announcement here.

Are there many normal people willing to shell out 400 USD (and overseas, with currencies and/or customs, closer to 500) for glorious Snapdragon 835 graphics, remains to be seen.
Also, there’s no killer app, unless you count Beat Saber as one, and no Zeldamario.
And people who have at least GF 1060 6Gb in their computer would be much better off getting Samsung Odyssey (Plus).

However, it will be essential for all kinds of VR training (think of situations that are dangerous and/or costly to simulate in real life): relatively cheap, no cords, no Oculus Go limitations.
I expect to see it a lot in these environments.

the higher spec model is GB£500, whereas the same model in the US (ok, ignoring sales tax) is GB£385 equivalent (at current market rates).

since you are into it, and it seems more than one launch today: http://www.techamok.com/?pid=valve-s-index-vr-headset-officially-unveiled-20771