Qualcomm is mostly known for its Snapdragon processors for mobile devices and wearables, but the company is also making WiFi chipsets via their (previously) “Atheros” family. Some of their latest WiFi SoCs are IPQ4019 and IPQ4029 (aka QCA4019/QCA4029) Wave-2 802.11ac “Dakota” SoCs for routers, gateways, and access points.

We recently covered the official Qualcomm mesh networking devkit powered by IPQ4019 processor, but there are now third parties also offering solutions based on QCA40x9 processor such as Dakota DR40X9 Wave-2 AC router board. 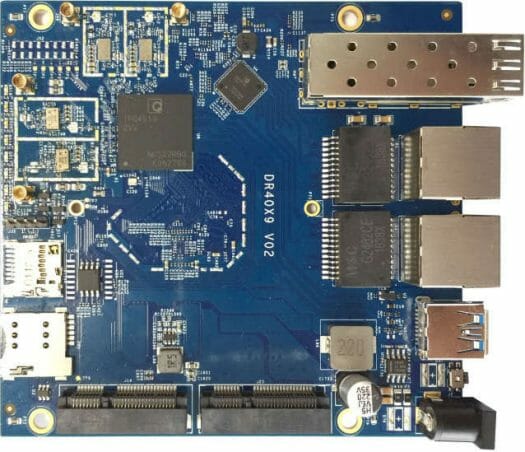 The only differences between IPQ4019 and IPQ4029 are that the latter supports  “Qualcomm IoT Connectivity”, and an extended temperature range of -40°C to +110°C. 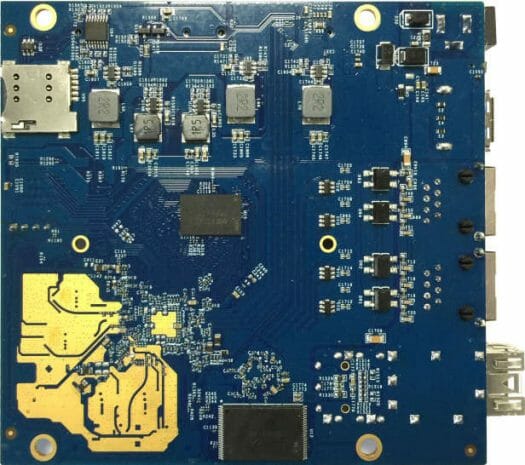 There’s very little information about software on the web, but representatives at Wallys Communications (Suzhou) Co informed me there were two software/firmware options for the board:

I’m unclear whether there’s any advantage of getting the QSDK considering the older kernel. For reference, QSDK stands for “QCA Software Development Kit (QSDK)” and additional information may be found on CodeAurora Wiki. There’s also mention of OpenWrt with Linux 4.4 kernel compatible with ipq40xx, but it remains to be seen if it is compatible with Dakota DR40X9 board.

I could not get public pricing for the board, but at least two companies are offering it: Wallys Communications (Suzhou) Co and Maxon (Beijing).

Anyway the most important is not the date itself but the fact that nobody maintains it anymore and that by definition it’s full of bugs and vulnerabilities. Definitely not the best thing to develop on! The board looks appealing though.

> The board looks appealing though

Hmm… just came across MikroTik RouterBOARD RB450Gx4 based on same SoC but with 1GB RAM. Looks more appealing to me (with a different use case in mind of course 😉 )

Oh yes definitely interesting as well! And it has 5 ports.

I can see regular updates for IPQ4019 in Linux mainline since Linux 4.8.
https://www.cnx-software.com/?s=IPQ4019+release
Maybe it’s usable by now…

The openwrt image page shows other similar devices, such as the gl-inet S1300 which uses the same chip, has 3 GE ports, 8GB eMMC and costs $159.

Looks cool, it also have support on OpenWRT.
I’m waiting HW Nat also on the ipq platform (AFIK is’t only available on MT76)

I have a 1Gbps connection and so far OpenWrt on ARM is not fast enough (Unfortunatly)
Even with all the new netfilter “addons” like fastpath.

Then you’d need the WRT1900-ACS, it runs an Armada 385 with gig ports. This beast has too much power for 1 Gbps 🙂 I own one that I wanted to use to replace my aging firewall (running kernel 2.4.37, not kidding) but it takes me too much time to finish the job and migrate the rules and rearrange the network, so for now it’s only used for network testing :-/

YEa but I’m using PPPoE so the problem is not trivial!
Right now i’m running on a Xeon with Pfsense and I still don’t get full badwidth due to the network stack of BSD

I see. You should try with a proxy on the machine as well. Sometimes using a proxy is much cheaper than using NAT, especially with MTU changes (as you probably have due to PPPoE) and/or small packets : the operations can be batched and do not need to be applied on each packet anymore, a stream is recomposed on one end, and re-segmented on the other one. Modern NICs (or their drivers) can do scatter-gather so you just have to give them a large 64kB packet they will cut into pieces. This is often cheaper than rewriting all packet headers… Read more »

Many router chipsets have fast-path NAT hardware. As long as nothing else “interesting” must be done to the packet, a lot of the Linux networking stack is avoided. This can make the difference in bandwidth between, say 100Mb/s and 1000Mb/s.

Unfortunately this hardware is usually proprietary and hacky so OpenWRT didn’t support it. This may have changed since I last looked at the issues.

So: the software requiring NDA may be a lot faster for simple NAT situations. Note: this is pure guesswork.

Thank you Jean for this article, we offer free samples now. Anyone who is interested in it ,don’t hesitate to contact me via [email protected]