I started playing with Khadas VIM3 Basic SBC powered by Amlogic A311D processor and 2GB RAM, and noticed Android benchmarks, especially 3D graphics were significantly better (40% improvement) than the ones of Rockchip RK3399.

So I decided it may be interesting to show Android gaming on the single-board computer, and installed the latest version of Android 9.0 with Google Play store. Finally I connected the RF dongle of Tronsmart Mars G01 wireless gamepad, as well as USB keyboard and mouse to get some fun. 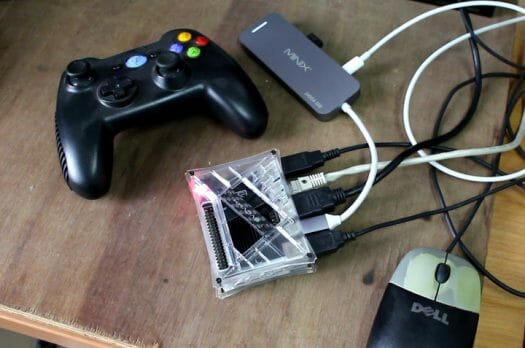 Since the board only has two USB type-A ports, I also inserted MINIX NEO S2 USB-C + SSD hub to connect the gamepad RF dongle.

Then I tried to install and play four games

So if you are interested in playing games in Android, and other plaforms don’t quite make it, you may consider checking out Khadas VIM3 SBC without having to go all the way to NVIDIA Android Shield TV. Note that many Android games are made for phones, and while the three games above worked out of the box, some require touchscreen emulation (e.g. CSR 2). This is still possible but requires a bit more work, and potentially buying an Android remote app to use your phone as a gaming controller.

You can check by yourself 3D graphics performance in the video demo below (~15 minutes) where I play all three games.

what happened to ur tv , u still using the wii 😛

Probably because of the weather here.