I’ve run some benchmarks on Khadas VIM3 SBC earlier this morning. The board is powered by the latest Amlogic A311D hexa-core Cortex-A73/A53 processor, and I’ve found results to be impressive. But let’s see how it compares to another hexa-core processor, namely the popular Rockchip RK3399 Cortex-A72/A53 processor released in 2016 and found in several Chromebooks, TV boxes, and development boards.

To do so, I’ve compared Antutu 7.x, PCMark 10 Work 2.0, and 3Dmark benchmark results in Khadas VIM3 board running Android 9, against an actively-cooled Rockchip RK3399 SBC running Android 8.1. The results for A311D should be the same as for Amlogic S922X-B processor, so this post could also serve as an Amlogic S922X-B vs RK3399 comparison. 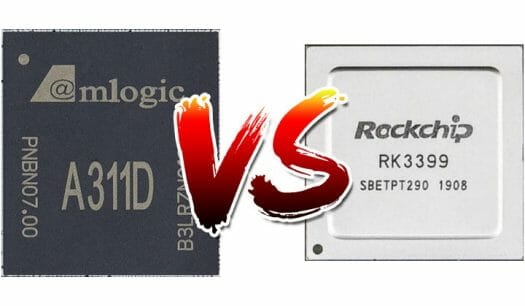 Contrary to Amlogic A311D/S922X-B, Rockchip RK3399 is not a TV box SoC, so the Amlogic processor will have better multi-media functions such as HDR (High-Dynamic Range) support, and overall better audio support & video playback compared to the Rockchip processor.

Amlogic A311D also comes with a 5.0 TOPS NPU (Neural-network Processing Unit), while RK3399 does not have one, but Rockchip does have an alternative with Rockchip RK3399Pro equipped with a 3.0 TOPS NPU. It’s a little early to test AI acceleration on A311D however, as the SDK will only be ready at the end of August.

When it comes to performance, A311D is clearly ahead with around 40% improved CPU & GPU performance in Antutu, and 15% higher memory bandwidth. PCMark 10 score is 24% higher, with web browsing 33% percent faster, and Writing 2.0 getting a 40% boost. To remove potential confusion about the exact purpose of the latter test, Writing 2.0  measures the time to open, edit, and save a document using the native Android EditText view and the PdfDocument API. 3D graphics score is 45% higher in Sling Shot Extreme in 3DMark, which makes me want to try some games in Android before switching to Linux…

It should be possible to boot from the eMMC flash and switch the rootfs to the SSD.

A311D can boot from PCI-E slot first but the bootloader has to be burned to eMMC or SD-card and then PCI-E slot can then be made the priority boot device with some tweaking in u-boot.

Given that the “hot” SoC of the moment (no pun intended) comes with the RPi4, it could be interesting to see the bcm2711 in the same table, especially once overclocked to 2 GHz. I suspect that for pure CPU operations there may be some workloads where it can surpass the RK3399 by a little margin thanks to having 4 fast cores. Still waiting for the huge heatsink I ordered before wasting my time testing mine 🙂

I’ll do that once I run benchmarks in Linux.

It’s better thermally, yes, but you risk damaging the die, either during delidding or afterwards when you attach the heatsink, as in the case of an SBC you don’t have firm, rigid heatsink frames/brackets found on larger boards, so pressure that the heatink applies on the die can be arbitrary.

If the rk3399 was actively cooled then perhaps it could’ve been clocked to 2GHz/1.5GHz as well, no?

Should tests be in a case and without a case. In the
real world how many keep open powered motherboards around, unless it is your job?

It depends if the test is a CPU comparison or a motherboard comparison. Here the focus was mostly on the CPU so it’s best that neither throttles. Then it’s the motherboard vendor’s job to properly handle the thermal issues.

But it is being tested in a non real world way, giving results most will never see. Would you buy a premium phone on naked motherboard only tests, or a Pi 4 on only mineral oil tank submersion results ?

I’m more concerned about performance comparison between CPU generations, then I can consider the heat and amount of throttling that can happen in different use cases. For example in my build farm I’ve set a huge heat sink to make sure there’s no throttling. Ideally you want to know how many watts were consumed during such tests to get an idea about what is possible at a given performance level. If you focus on thermal design first, the problem is that you’ll always favor low-end processors like A7 or A53 over any other one because they heat less even though… Read more »

The RK3399 does support both HDR10 and HLG HDR output under LibreElec. My RockPro64 has output both to my UHD HDR TV. (It’s one of the few Kodi platforms that handles HLG HDMI 2.0 flagging correctly too)

HDR10 and HLG are played back with the correct EOTF flags (so trigger HDR modes on TVs) but HDR10 mastering and MaxCLL/FALL metadata isn’t currently passed.

Yes – but there is no requirement for any metadata for HLG (that’s one of its major selling points). It’s only HDR10 that requires additional metadata like MaxCLL/MaxFALL for full display support – HLG HDR (which just requires an EOTF flag) is fully supported now.

a tablet with amlogic A311D would be great, the chinese tablet market is so boring at the moment with no new SOC for a while now, only the just announced Mediatek G90 ( A76+A55 + Mali G76 on 12nm) seems promising if priced right

There does seem to be some performance differences between the A311D and S922x, so it would have been appropriate to compare all three.

None of these new SOC’s really come close to the Tegra in the Shield though, so in 3 and a half years, progress has to be seen as disappointingly slow.

Yes S922X will be a bit slower due to lower clock frequencies. However, S922X-B should be the same as A311D.

Then again none of these SoCs is a 15W behemoth with 25GB/s RAM channle : )

BTW, even though CA73 is an efficiency-first design, it still outpeforms clock-per-clock CA72 in a few (non-SIMD) tasks, and same goes for the CA57.

Can you elaborate a bit, please?
Tegra X1 is 4xA57 @ 2.0Ghz, nothing to sneeze at, but nothing to write home about.

Depends how you look at things. Nvidia Shield is £175 in UK . While a GT King is around £89 on gearbest.

I was excited about this AMLogic A311D up until I saw those benchmark results. RK3399 is 3 years old. Average performance gains look to be around 20%… RK3399 has a huge ecosystem already, so I doubt A311D will be able to unseat RK3399, especially considering HDR displays are increasingly common and A311D doesn’t support 4K HDR decode. I’m sure some successful products will appear based on A311D but it’s not going to be a community leading product. 🙁

The lower power draw could help. Having 4 big cores as well, but if rpi4 users start to overclock their boards and install massive heatsinks, this will lower the perceived benefit of better designed boards also featuring 4 big cores. In 6 months we’ll see RK3588 come with 4xA76 and this can provide a significant improvement over RK3399. Even if it takes time to land on SBCs, the perspective of its future availability might make a number of people hesitate about A311D now.

I wonder where one can buy the bare boards?
CPU+ROM+RAM+LAN+WIFI+BT.
Or even media players consisting of this hardware?

Did you have a look at Khadas VIM3 ? Unless I missed anything it’s what you want.