GT1 Mini 2 is not the first TV box announced with S905X3, as we previously covered Elebao X3 that was supposed to launch at the end of May. So there clearly has been delays, but this time the launch should be closer as Beelink also shared benchmarks and system information from Android 9.0. 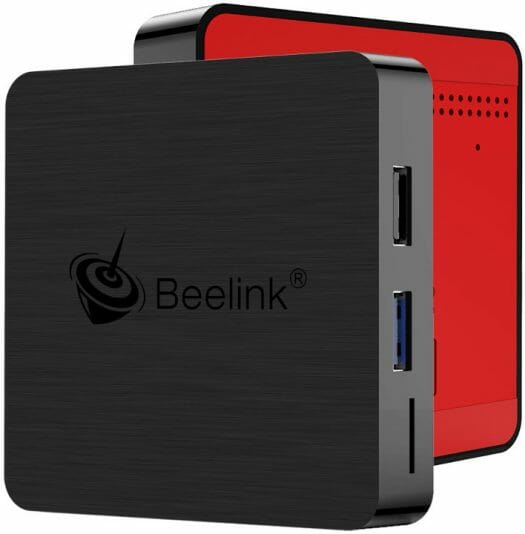 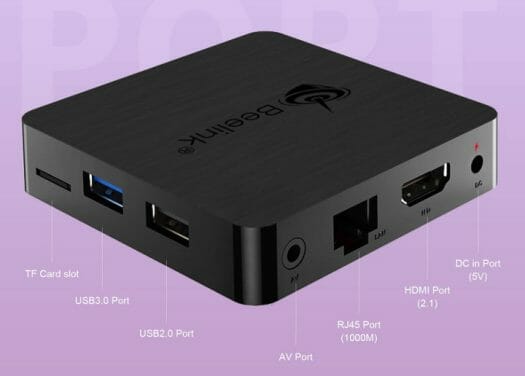 The device runs Android 9.0, and ships with a voice remote control, an HDMI cable, and a power adapter for the US, EU, or UK. Pricing has not been revealed yet, and it’s still unclear when it will launch exactly

But let’s see what we can learn from some of the screenshot provided by the company.

I combined two CPU-Z screenshots above to have a quick overview. We can see the system reports the Cortex-A55 cores can be clocked between 100 MHz and 1.91 GHz. The operating system is the latest Android 9 with Linux 4.9.113, but security is still an afterthought in TV boxes with the security patch level dated from nearly one year ago. The board name is franklin as shown in the build ID string, and confirmed by AIDA64.

Beelink GT 1 Mini 2 got 63,573 points in Antutu, and Beelink compared it to X96 Max (S905X2) TV box which got 61,835 points, a difference that’s quite lower than I would have expected since Arm claimed “up to twice the performance” over Cortex-A53 when it announced the new Cortex-A55 core in 2017. At the time, we could see the new core achieved this extra level of performance in memcpy benchmarks, while other benchmarks would see a 14% to 38% boost. However, the Antutu benchmark we have here only shows a 3% improvement that’s insignificant.

With 3DMark’s Sling Shot Extreme OpenGL ES 3.1 we’ve got a slight improvement with the S905X3 scoring 342 points against 312 points for the S905X2 model. The GPU should be the same so maybe the ~9% performance improvement is due to a higher GPU clock.

Beelink explained GT1 Mini 2 will replace GT1 Mini, so maybe the price will be a bit lower since performance and other features are almost the same. [Update: GT1 Mini 2 is now sold on GearBest for $79.99 with 4GB RAM, 64GB storage. See pinned comment below]

By all means, its a decent price. The rise of S905X2/G31 MP2 setups has had some interesting developments in the market: – Embrace to OpenGLES3. The Allwinner H6, prior to the S905X2 a more ”mid-field” SOC (With the S905 variants being overly common) has now taken its place, and its one of the cheapest OpenGLES 3 capable devices out there. – Embrace for 4 GB ram. On the aforementioned H6, a 4 GB DDR3 machine with 32 GB NAND is between 35 and 45 bucks. These were normally features reserved for high end boxes, and most S905 boxes still feature… Read more »

armv7l is reported as the kernel architecture. It might be a mistake from the utility or the truth, possibly explaining there is no gain to expect over A53, as armv7 mode performance very likely is the least concern when it comes to optimizing new cores.

The device’s specs look appealing to replace an aging PC or headless server (thinking about my reverse proxy still running on an old Dockstar, and a few ALIX based machines). Let’s see the price when it’s out.

The real question is, does it support Netflix?
It seems to have a nice set up supported media standards, but I wouldn’t invest in one of these if it can’t do Netflix.

Edit: It would seem it does, according to the Gearbest website, but can that be trusted? ” It has passed Google certificated, with voice remote control, support Netflix 4K”

Why are people always worried about Netflix? You do realize there’s dozens and dozens of apps that deliver Netflix content in HD? And not to mention more movies and TV shows than Netflix has. Why are people still paying for Netflix anymore when you have an android box is beyond me.

Because, you know, you might actually end up in legal trouble by illegally downloading content? And Netflix has some decent content and doesn’t cost a fortune. Each to their own, no? I don’t know why you wouldn’t want Netflix support, as it’s sort of the lowest possible denominator for a media player these days.

It depends where you live. America has lots of legal streaming service. Google, Amazon, YouTube TV, PlayStation Vue, Hulu, Rakuten etc. Netflix is no longer the only source.

Well, it is the one with supposedly the most stringent copy protection limitations, which tend to mean that if the Netflix app works, everything else should work, which was sort of my point. Whether you want to watch it or not, well, that’s up to you.
It’s pretty much the only legal option that’s available for me in English, so…

Positively, absolutely NO WAY IN HELL will this box play Netflix streams that exceed 720X480. Gut feeling is that Netflix (ninja) from official Google Play Store won’t even load.

It may be included in project Hailstrom somehow, and be able to play in HD… https://medium.com/@NetflixTechBlog/hailstorm-the-netflix-scaling-solution-over-android-tv-fd169366f828

I stated before A55 only brings some increase in memory performance and newer instructions. Other than that, most of the other units are the same. NEON is NEON and won’t get faster at the same clock and most of the execution ports are the same with some minor optimization to the units themselves. You get some 8 bit instructions and improved FMA. Nothing to write home about.

Increase in memory IO leads to increase in IPC and SIMD is both wider and much better feed complete reworked. The shared L2 had a big performance penalty especially on SIMD FP instruction execution besides their whose a huge confusion in software stacks regarding A53 erratums and A53’s cache prior to the V. 2. had to be constantly flashed but as already stated thanks to confusion it whose common even with V. 2. hardware revision diminishing performance additional 6~7%. 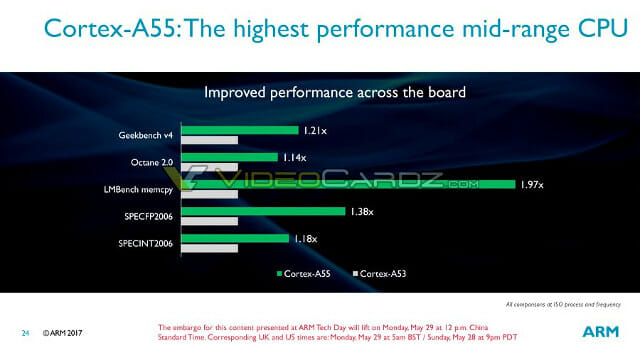 At least in this copy, the finest fine print cannot be read.

Sadly, almost any marketing team does this terrible crap nowadays. Usually when you see this you know the gains were so small that it forced them to cheat, so it goes against them in fact.

Yes, but it’s optional according to the specifications. Maybe there’s a specific part number that includes the NPU.

What is “PRIME HDR processing”?

Could it be “Amazon Prime HDR”? That’s what Google suggests.

Patching kernel versions and Android security levels are up to manufacturer… There are publicly available Android Security Bulletins released each month… When it comes to armv7l instruction set that is reported by info apps it’s because official Amlogic SDK uses 32bit mode kernel configuration for some strange reason by default. I tried to use 64bit version of kernel on one of my projects but it’s buggy, wifi stops working etc. And when it comes to 64bit OS, their SDK is missing prebuilt 64bit libraries which ends up in failing to compile 64bit firmware.

OK so it’s urgent to let it dry a little bit before playing with it. Thanks for the info!

3 months passed and still not in sale… how many months we must way in order to release this tv box to the market?