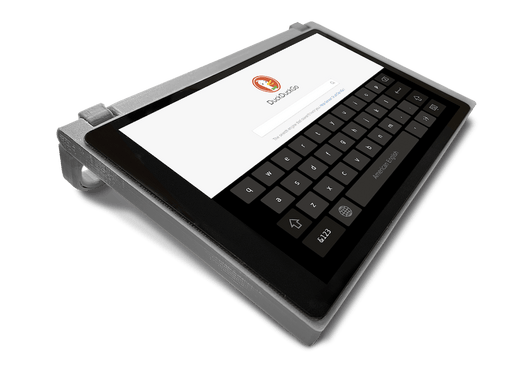 CutiePi Tablet has no firm release date, but the company is saying late 2019 for launch. The development team is also saying everything is subject to change, but look for the pricing to be USD $150 – $250.

The tablet is different in its thinner design and in the software designed specifically to use Linux Raspbian OS for a touch screen platform. There are readily available source code and case plans for the ambitious developer who would like to build the unit from scratch. All the source files for MCU, firmware and design plans can be found on GitHub.

The entire tablet is an 8-inch touchscreen display and does not need an external keyboard, mouse or really any other hardware. On the inside is a Raspberry Pi Compute Module 3, carrier board and the software for the touchscreen to work with Raspbian OS.

The Lightweight and Thin Design

The unit is thinner than other Raspberry Pi tablets and the developers pointed out that the height and weight are due in large part to the use of the Raspberry Pi Computer Module mounted on a carrier board, rather than the full-size Raspberry Pi SBC. The entire unit is to weight around 350 grams. 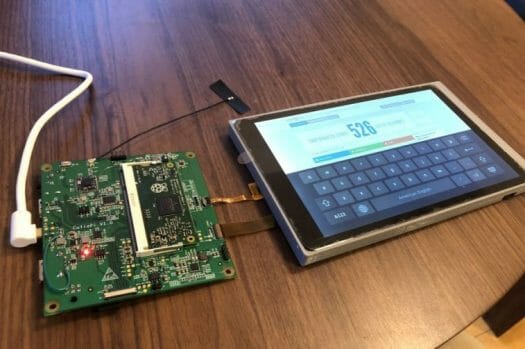 The User Interface that was designed for a touchscreen environment, is based on Qt, and that makes sense with the name they have chosen for their device. Images we have included here are showing both an exploded type of setup with a carrier board with the mounted RPi Compute Module separate from an 8inch tablet, while the device website is showing a tablet in a neat case with a folding handle that can double as a stand.

You’ll find more details on the project website. Some of the information in this article was taken from the article on Liliputing.com.

Perfect platform. Proves that you don’t need more than 1GB of RAM.

So RPI should stop riding on the coat tails of other SBC manufacturers and end 2, 4 GB boards, then Jerry ?

/me is pretty sure Jerry is an AI trained by jamesh so he could get some sleep between bursts of acting like a chimp on the rpi forum.

RAM is cheap and expected to get cheaper due to over-supply so not take advantage of the market conditions is just silly.

> Perfect platform. Proves that you don’t need more than 1GB of RAM.

So those ‘people expecting 4GB nowadays’ are a mere nuisance to the Foundation, eh, Jerry?

This is a specialized embedded appliance while RPi 4 users expect maximal versatility.

A specialized embedded appliance running a desktop OS derivative with a full-fledged browser? I have several of those, they’re cheap chromebooks and their vendors upgraded from 2GB to 4GB about 3-4 years ago. I wonder why. No, wait, I know, as I still have a ubuntu tablet with 2GB — ram is its single largest bottleneck. I’m sure 1GB for the same use case will make customers super comfy..

I can only say that the ARM Thumb code is tighter and conserves memory compared to large x86 64bit code with double size pointers.

The devices I was referring to are all aarch64 kernel + armhf userland, out of the factory. The ubuntu tablet, in particular, runs predominantly thumb code, as per Canonical’s default compiler settings — this does not help that tablet in being the worst web performer out of the bunch — the chromebooks wipe the floor with it. No wonder — thumb affects code density alone, but the problem of ‘rich’ JS web content is not code density.

Bottomline: thumb binaries will not save a CM3 web-browsing device from being RAM-starved.

Now that Pi4 is out, this is obsolete before it has even launched. All the time spent designing it was wasted: a painful lesson to anyone using RPi in a design.

It’s highly likely that they’ll soon publish a new CM4 with BCM2711 and 4GB of memory. The module might be pin compatible with the old one.

Ironically, this reinforces the issue. There is no roadmap or forecasting provided by RPi for product development/planning. Nobody knows if there will be a CM4.

The more likely scenario is that RPi is in talks to sell the brand. Broadcom is no longer interested in subsidizing them resulting in the premature and unexpected release of RPI4. The RPI4 also has no growth path: its too thermally constrained for faster cores and too memory bandwidth constrained for newer cores. This all indicates it will be the last product produced before RPi is either sold or dissolved.

This is pure FUD. RPi is basically the market leader and all other boards copy the design as they attempt to provide pin compatible designs. When RPi extended the number of GPIO pins, so did the others. When RPi switched the port layout on the board, others shamelessly copied the idea. It seems that RPi users will now want faster CPUs, which will result in designs with larger heatsinks. Maybe RPi 5 CPU will have a TDP of 30W and a Noctua CPU cooler. The others must follow the suit or they will have hard time selling their custom clone… Read more »

TBH I’m pretty sure you’re just trolling at this point. Same sort of religious fervor as some of the characters here but in reverse to really get them wound up… anyhoo.. >The others must follow the suit or they will have hard time selling their custom clone designs. I think that’s hard to say without proper numbers really. Just to get the chips at the price orangepis etc are sold at means ordering them in high volume and a lot of the Chinese companies have shipped ~10 different designs at this point. A lot of those designs look nothing like… Read more »