Variscite has just announced the launch of the VAR-SOM-6UL System-on-Module (SoM) powered by a choice of NXP’s i.MX 6UltraLite / 6ULL / 6ULZ Arm Cortex-A7 processor clocked at up to 900MHz CPU clock and based on the company earlier DART-6UL module while integrating an additional LVDS bridge option, all packed in SO-DIMM200 form factor to fit the VAR-SOM Pin2Pin family.

You’d be forgiven if you can’t quite remember all variations of NXP i.MX 6 processor that was launched in 2011 with Arm Cortex-A9 cores. NXP i.MX 6UL, i.MX 6ULL, and i.MX 6ULZ are all equipped with more efficient (low power) Arm Cortex-A7 cores. NXP i.MX 6UL (aka i.MX 6 Ultralite) was launched in 2016 with clocks up to 696 MHz, followed shortly after with the announcement of i.MX 6ULL processor with fewer security features to lower the cost, but the addition of an eDP interface.  NXP i.MX 6ULZ is the most recent having just been unveiled at the very end of last year (2018) with a higher 900 MHz clock, but fewer features to lower the total cost,  meaning Ethernet, display & camera interfaces are all gone.

The new platform has been customized to fit the ‘VAR-SOM Pin2Pin family, providing a scalable pin-compatible option to i.MX 6 and up to i.MX 8 platforms which explain why some of the pins are shown as “not compatible” in the block diagram above.

The company also offers VAR-SOM-6UL Development Kit and Starter Kit that can serve as a complete development platform for both evaluation and application development purposes. Both include a module with i.MX 6ULL processor with 512MB and either 512MB NAND flash or 8GB eMMC flash, as well as Concerto baseboard exposing all interfaces and I/Os supported by the i.MX 6 or i.MX 8 “VAR-SOM Pin2Pin” modules 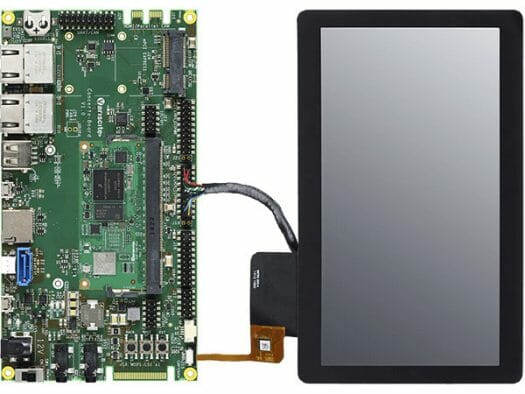 The starter kit and development kit have the hardware, but the latter adds a 7″ capacitive touchscreen display, an Ethernet cable, and a 12V power supply.

Variscite VAR-SOM-6UL SoM and related development kits are available now for orders in production quantities with the module price starting at $24 per unit for 1K orders.  The starter kit goes for $149, while the development kit sells for $269. You’ll find the full details about the SoM and development kit, including purchase links to order online, on the product page.

It seems weird to put the imx6ul on a module like this considering it’s meant to be a low cost part.