The latest entrant into the miniprojector market is the Phillips PicoPix Max Pico Projector in two versions, x10 and x100, a very versatile projector with many features and large aspirations. The mini projector is nothing new and we have reported on it in depth for units that came out some time ago such as the Rikomagic RKM R1 or Doogee Smart Cube P1. The fact that a major electronics manufacturer is launching a mini projector through a crowdfunding campaign is somewhat unusual, but let’s have a look at the details. 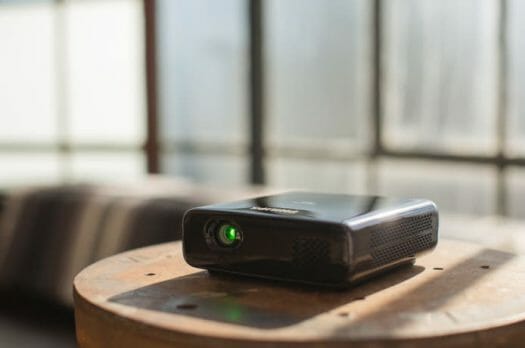 Phillips is calling the PicoPix Max Pro a premium, portable cinematic experience. The unit is made to go anywhere and not need a phone or laptop to function but has a large number of ports and options for each port. The LED light bulb is said to last 30K hours, and the source is 800 ANSI lumens strong and can run off the internal battery for 3 hours of completely wireless uptime. The unit is a 1080p Full HD Pico Projector, with direct input from the touchscreen on top of the unit, which has a built-in trackpad. The projection size can be adjusted from 30” up to 120” (75 cm up to 305 cm) with a 1.5 GHz quad-core CPU and 16 GB of internal memory.

There is a large array of devices that can be plugged into the units. Some of these devices are Macbook, iPad, iPhone, flash drives, hard disk drives, tablets, gaming consoles, and speakers. The units have a speaker arrangement built-in, but also a number of options for audio. Connections can be made through Airplay, Screen Mirroring, USB Type C (power and video) USB Type A, headphone Jack, Bluetooth, and HDMI. The units are all Apple ready through the USB Type C connectors. The units can host any iOS or Andriod device. 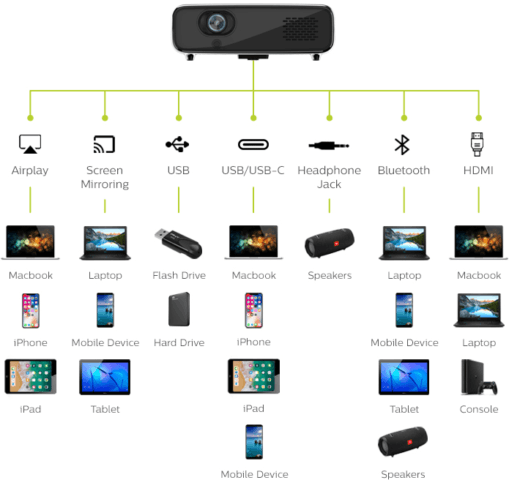 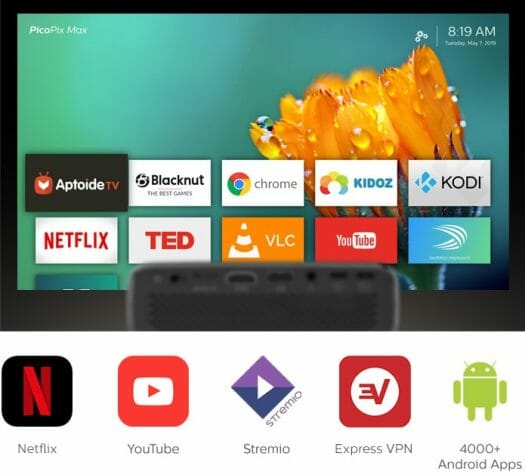 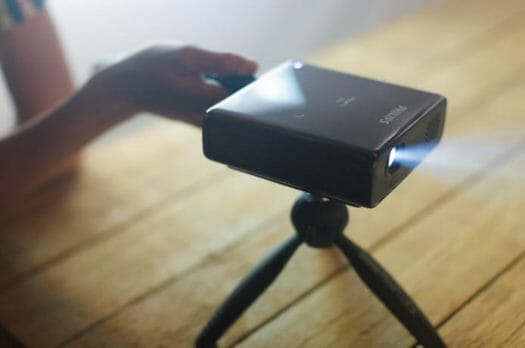 A Feature Above The Rest

There is an autofocus feature that is controlled by an internal camera mounted just below the lens, for a constantly updated image to make sure the picture is clear and in crisp focus.

I don’t think “crowdfunding” is the right term here. Philips obviously already completed the design to deliver by October. The asking amount ($55,723) can likely be found in “petty cash” in any of their offices around the globe. So can we just call it what is instead: “pre-orders”?

Be careful, VAT and custom taxes are not included in the Indiegogo price.

Anyone know if it supports low latency bluetooth audio like aptX Adaptive or aptX Low Latency?

Couple of potential gotchas…..Ships with Aptoide app market which implies lack of Google Play Store and NO GOOGLE CERTIFICATION and NO NETFLIX HD approval. Also there is no mention of Widevine and/or Playready licensing.

What are distinctions between 2 different models?

What TI DMD is used and is it native 1080 or using some resolution stretching algorithm?

There are so many issues with the “specs” given in the campaign: 1. No DMD size provided 2. Absolutely nothing on the acoustics of the projector, it’s going to have a fan, and if they aren’t saying how loud it is… 3. Nothing about the SoC inside (except “QuadCore 1.5GHz” which could be literally anything) 4. Very obvious typos that should/wouldn’t have made it past marketing “LED light sources: last over 30.000 hours” 5. Every single one of the use case photos is photoshopped to the quality I’d expect from random AliExpress sellers If you’re going to sell such an… Read more »