There are already ways to convert your TV into a smart TV running Android with touchscreen support, but you’d need to buy an Android mini PC and a infrared touch frame overlay for your TV both of which should cost several hundred dollars in total, and the larger your TV the costlier the price, and once you get the hardware, you may also need to modify your kernel source code to enable USB touchscreen… A US start-up is now working on a much cheaper and easier way to achieve this with Touchjet WAVE, a quad core Android mini PC that integrates an infrared sensor to track finger movements and taps across the screen of your existing TV. 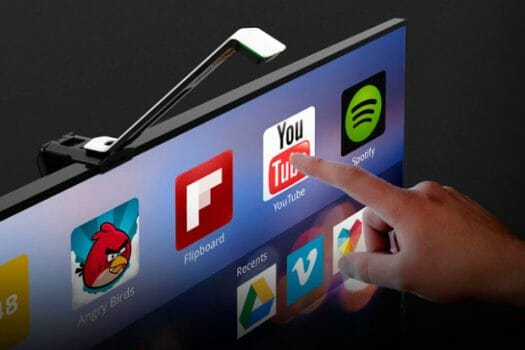 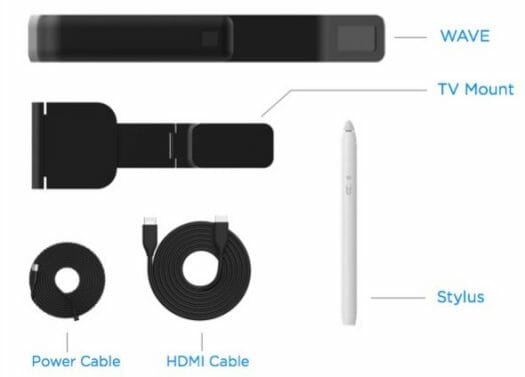 The WAVE will ship with a TV mount, a USB power cable , an HDMI cable, a infrared stylus, and an optional air mouse. It runs Android 4.4 with the company’s Touchjet UI, and Touchjet Media Sharing and Remote Control App. The latter will let you control the TV without being right in front of the monitor, but you could also use a wireless keyboard or air mouse using one of the USB ports. Watching the promo video to get a better idea of what the device is capable of.

After four days on Indiegogo, the project raised over $280,000 from nearly 2,000 backers. All early bird rewards, where you could get the WAVE for as little as $99, are gone, but you can still pledge $119 to get one “WAVE Indieogo Edition 1 Pack”, or $225 to get two. Shipping is free to the US, but $30 to $50 to the rest of the world, with delivery scheduled in March 2016. That’s the second crowdfunding project from the company, as they previously funded and shipped the Touchjet Pond touchscreen projector, that now sells for $599.

But does it come with a box of vitamins so i can grow 4m long arms to use it?

It has no practical use as I think because when you are too close to your TV to control It really bothers your eyes especially those modern High brightness LED TV’s, so i think that the TV is made to be controlled remotely.

@notzed
@Abdullbasit
You can always use another input device like an air mouse, wireless keyboard, or smartphone, as you would do with another Android mini PC.

But I agree that most people may not really need a touchscreen enabled TV.

Complete waste of time, of course there is a never ending supply of gullible idiots on crowd sourcing for “insert mobile OS into device which doesn’t really need it” campaigns.