Shenzhen Wesion recently unveiled Khadas VIM3L SBC designed for HTPC / media center use cases. The board is based on Khadas VIM3 PCB but replaces the powerful Amlogic A311D processor by Amlogic S905D3 processor that should be just as good for video playback, but enable much cheaper hardware.

The board is not quite available yet, but the company has started to take pre-orders for Khadas VIM3L at discounted prices either as a bare board with Android 9.0 pre-installed ($49.99), or as a CoreELEC HTPC kit with enclosure, heatsink, WiFi antennas, and IR remote control ($69.99). 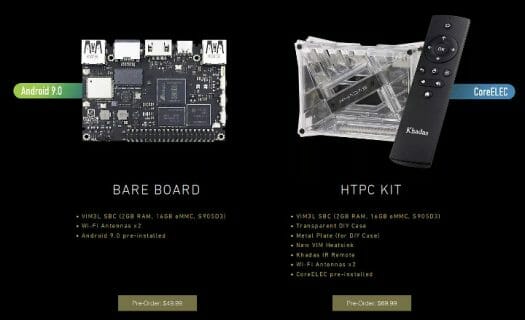 Prices will increase with time as follows:

Note that worldwide shipping is already included in the price, so you don’t need to pay an additional shipping fee as most other companies do. The company will start shipping pre-orders on October 30, 2019. 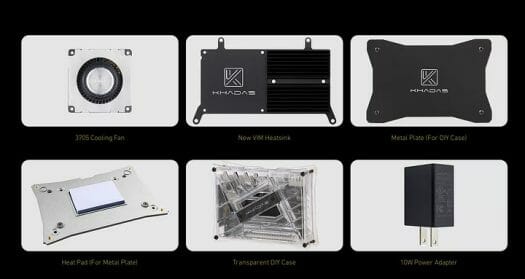 Khadas VIM3L will support the same accessories as VIM3 with for example the heatsink, fan, M2X extension board with PoE,  4G, and NVMe SSD support,  or TS050 MIPI DSI touchscreen display.

While mentioning cooling, the company notes the following which matches my experience with VIM3 board:

S905D3 is capable of operating in passive cooling mode whilst running Android OS.
If booting Linux, or 3rd party distros, adding the 3705 Cooling Fan for active cooling is recommended.

With the recent launch of Khadas VIM3 & VIM3L boards, the previous VIM boards become less interesting, so it makes sense for them to lower their prices. Khadas VIM board, now known as VIM1, is powered by Amlogic S905X processor, while VIM2 features Amlogic S912 octa-core processor.

The new prices are as follows:

If you are instersted by those older boards, you can get VIM1 and VIM2 here and there respectively.

> S905D3 is capable of operating in passive cooling mode whilst running Android OS. If booting Linux, or 3rd party distros, adding the 3705 Cooling Fan for active cooling is recommended

How should this make any sense at all?

That’s very weird indeed. But in Android, benchmarks with heatsink or heatsink + fan yield the same results. Going to Linux, the board seems to overheat much more quickly. It could also be a difference between Android and Linux benchmarks/workloads, since using all cores at full capacity is more common in Linux than in Android.

So the question is what is the Android firmware doing they (?) provide?

Probably they just changed the throttling threshold because they consider that android users use it to watch movies, don’t touch hardware and will not care if it’s hot. Just my guess.

I’m still interested in getting one and see what’s new in ARMv8.2a compared to v8a. This point actually makes it more interesting than the plain VIM3 which is still purely v8a.

It’s the same throttling value between the Ubuntu and Android ROMs.

Hi Jean, wanna double confirm with you that the Android & Ubuntu ROMs version you installed when you perform the testing, and we will do a testing here and try to figure out the difference.

As mentioned in my comment above, it could also be the workloads are different. Antutu spends a shorter time using all cores, while SBC-Bench does it for 7-zip and cpuminer over several minutes.

Personally, I think for HTPC users, 3705 cooling fan is not a must for VIM3L.

Sadly it doesn’t inspire confidence when you say hey, we give you a heatsink and a metal plate but it’s still going to get too hot, so pay $2 more for a heat pad. Doesn’t really inspire vendor confidence in the product and/or could look like a scheme to squeeze a little more money out of people. Add that to still using a neolithic USB 2 port as one of only 2 is criminal in 2019, especially as the SOC supports 2 x USB 3, which would have made it way more attractive a proposition from the get go. I… Read more »

Maybe “criminal” is probably a bit excessive here ? With this said, I do also think that the thermal design of this family of boards should be significantly improved in the future, placing the SoC at the bottom to allow installing a large rectangular plate without having to resort to a complex X-shaped low-efficiency heat sink and an extra noisy fan. It will also reduce design and manufacturing costs. And these boards employ low-profile connectors, which are particularly suitable for use with a bottom plate since there should be a few millimeters margin at the bottom for them anyway. At… Read more »

Anyone have an estimate for what the S905D3 SOC costs?

May be you can share me your email address, and I will response you by email.

My experience with VIM3, a lot of software bug. you can join khadas forum see issue. not stable cannot usage in production and not well known community. recommend for power user only.

Hi wtn2002,
This is Gouwa from the Khadas team and thanks for the VIM3 order 🙂

May I know that what issues or software bugs you got? Usually, our team will response all the feedback and try to resolve most of the them asap, but to be honest, we still need to do more to improve the user experience and we also thanks to all the developers from the open source community and all the contributions they made.

BTW, we just released Androd Pie and Ubuntu ROM with OTA update feature for the VIM1(S905X) days ago 🙂

God question. I had the same and on the fence on which to buy.

Folks, please beware: the VIM3L ships as the N0N version (NO DTS and Dolby Vision)!

@Jean-Luc Aufranc, you might want to correct the article at https://www.cnx-software.com/2019/08/21/khadas-vim3l-amlogic-s905d3-sbc-targets-htpc-enthusiasts.