Khadas recently launched VIM3 single board computer powered by Amlogic A311D that delivers the best performance among Arm-based SBC’s I have tested myself, and for instance, Amlogic A311D is significantly faster than Rockchip RK3399, and the platform is quite suitable for Android gaming.

All that power comes at a price however, as Khadas VIM3 starts at $99.99 with 2GB RAM and 16GB storage. That’s fine if you’re going to leverage the features and power of the board, but for some applications, it’s quite expensive. One of those applications is HTPC, as in a world of sub-$50 TV boxes, $100 is a bit too much for watching video content. So the Khadas team is currently developing Khadas VIM3L based on Amlogic S905D3 processor that should provide an excellent platform for HTPC. 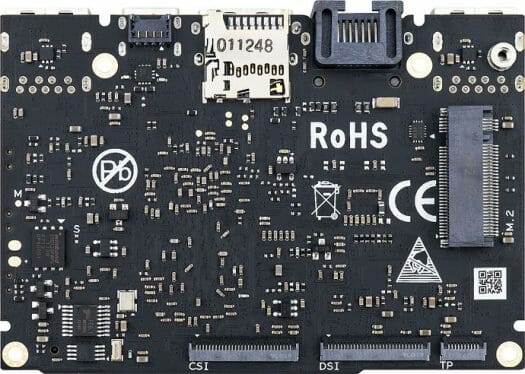 The company will provide mainline Linux (Linux 5.0+),  mainline U-Boot, and the SBC will support Ubuntu 18.04  and Armbian Linux distributions, as well as HTPC-focused firmware such as LibreELEC or CoreELEC, and Android 9.0 operating system. Since Amlogic S905D3 processor is a “D” part we might also have expected support for dual-independent tuners via add-on boards such as VTV Expansion DTV board, but the company did not layout the expansion pads on the bottom of the board like in Khadas VIM2, so it won’t be compatible with the aforementioned expansion board.

Khadas VIM3L will be compatible with the enclosure made for other VIM boards, so you should be able to get a complete kit with the board, enclosure, IR remote control, and power supply.  That’s about all we know for now, as availability and pricing have not been disclosed. More information should eventually be posted on the product page and forum announcement.

Given that HTPC application is the main thrust, would one be unreasonable to expect Netflix approval?

I don’t think it will happen. Last time, I discussed this with another company Netflix was asking for proof of a minimum of X millions of units sold in the US. Maybe things have changed but I doubt it.

The reason is for liability and upstream licensing.

I’m a little bit confused. The article and official Khadas webpage is saying that S905D3 has A53 cores, but in linked SoC datasheet (also official, I believe) lists A55.

Also, I tried to find any documentation about built-in Cortex M4 and/or STM8S003, but I couldn’t find anything. Does Khadas provide at least some code examples?

It’s Cortex-A55. I failed to spot that mistake in VIM3L specs.

The Cortex-M4 is built-in, while the STM8S003 is on-board. (Some of the) Previous VIM boards have this too, so there should be something. Khadas guys will probably answer in comments here.

Regarding the STM8S MCU, we provide the interfaces for users, you can check the KBI document below for the further details:
https://docs.khadas.com/vim3/KbiGuidance.html

@Gouwa Is there any more information on using the Cortex-M4?

Does it have USB3 AND pcie M.2 or is it either or?

It has both, but you can only use one interface at a time because USB 3.0 and PCIe are multiplexed.

Instructions for VIM3(L) users to switch the combo interface between PCIe or USB3.0:
https://docs.khadas.com/vim3/HowToSetupPcieUsbPort.html

What do they mean by non quad core ?

Does that mean the NON does not have any DTS nor Dolby licenses?

Wouldn’t it be something useful to have if the board is promoted as an HTPC platform? That would differentiate you from the rest of the board too. But maybe the cost is prohibitive?

Yes, the Dolby DTS does a nice feature for HTPC, I will talk with our team if we can get the license from the Dolby company.

BTW, is it possible to build a poll here if users will need this feature? I think the retails price should be at least $5 higher.

I don’t think there’s a way to make a poll in comments. Would that work on Khadas forums? Then maybe share in on relevant communities like Kodi, LibreELEC, and CoreELEC.

I can’t quite remember if licenses are needed for HDMI pass-through though, so it may only be useful for down-mixing. If I remember correctly Kodi does not care about those licenses and supports pass-through and down-mixing in any case. Other programs / apps may not work well.

In that case you should remove the Dolby Vision part from your post. It’s misleading.

In the board’s current NON version SoC, there is no processing.

The patent for one of the basic dolby licences expired a while back, so as far as I know, could be incorporated without requiring permission.

If you are promoting it as a HTPC platform HDR + Vision is necessary. A middle ground would be to offer it as an add-on option like Pi foundation did for MPEG-2 licenses..

Does anyone know what “low latency 1080p H.265/H.264 60fps encoder” means? For an encoder to work, it has to be able to process a frame in less than a frame time or it can’t handle real time encoding. The other thing effecting latency is how many prediction frames its configured to use. Does this mean that this encoder simply doesn’t support many prediction frames?

Latency in encoding usually refers to how many frames are buffered to allow LongGOP compression to take place. Whilst each frame is encoded in less than duration of a frame, as required for real-time, when you have long GOPs for temporal compression, you buffer multiple frames through the encoder (so you can compare the content between them) and the overall latency can thus be many frames (the encoding is still happening in real time – but there is a fixed latency delay introduced from the time the input frame arrives to the time that frame is output to allow for… Read more »

Thanks, Steve. That’s what I was thinking. Am I mistaken in thinking that the I, B, and P frames are normally a completely configurable set of parameters for video coders? Up to some limits, of course. You can always pick values lower than the maximum supported and get worse compression/quality, but lower latency. What confuses me here is that to get lower latency, you have to have fewer reference frames (or don’t use B frames) and that means poorer compression/quality and there’s no way around that except for cranking up the bit rate. That leaves me with my original question,… Read more »

If it’s aimed at the HTPC user (now modified on the Khadas website to show DIY-HTPC, whatever that is supposed to mean, then the GPIO pins and camera connectivity are not really required, so removing them could make for a smaller board.

It should also be sold in a case with heatsink and supplied with ac adapter as happens with all the other boxes like the GT King.

You would sell way more if it’s a case of open, connect and go.

Having no micro-sd card slot is also a deal-breaker. How to boot CoreELEC or Linux for HTPC use then? Must also have a physical power button and AC barrel power connector, supply with at least 5V3A not 2A. The USB C cable ones are very fragile and stop working if only bent a little. Must also have at least 3 or 4 USB ports to connect hard-drives and remotes controls like Xbox wired or airmouses. The one USB port doesn’t have enough power to connect even 2 remotes(500mA) and the other USB(900mA) port will have problems with USB hard-drives if… Read more »

I find that this can make a really nice general purpose Linux machine. It could easily replace one of my old ALIX running off a 8GB CompactFlash with 256 MB RAM! I’m a bit concerned with the long-term reliability of the USB-C power input though. I would have loved to see a barrel connector next to it taking about 7-20V (let’s say poorly regulated 12V). But I understand it’s not easy given that the board has a really low profile. If at least the power-in connector could be accessible on the board somewhere (even just with pads to solder on),… Read more »

Responding to myself, I looked at the schematics and board components, and it appears that the black connector beneath the USB-C connector is the DC-IN connector 🙂 Two pins are for the + (marked 12V but 5..24V on the DC-DC input), and two for GND. This definitely is a good design! There’s a case available, so that may indeed become one of my new servers. However the accessories are prohibitively expensive in my opinion. $15 for a fantasist enclosure + $10 for a small heat sink looks quite overpriced. For 1/4 of this FriendlyElec provides a nice, clean, flat, metal… Read more »

By the way, for small server designs, the heat sink is not needed. I have built haproxy on the board using “make -j 4”, and although it was not fast, the CPU became barely warm to the touch. The board is very small and shipped in a nice rigid little box that some could probably turn into a cheap enclosure by cutting a few holes for connectors into it. I haven’t managed to see the SPI flash yet, and unfortunately u-boot installs on eMMC instead. I’d like to move it to SPI and turn to extlinux.conf or at least u-boot… Read more »

> although it was not fast

Can you provide the result of a quick 7-zip benchmark?