Rikomagic R6 is a mini Android projector that looks like a vintage radio, or depending on your point of view a mini vintage television. We’ve already gone through the specifications last time around, but the smart projector is based on a quad-core Rockchip processor coupled with up to 2GB RAM and 16GB storage, while the 720p projector delivers up to 70 ANSI lumens.

The company has now sent me a sample for review, so in this first part of the review, I’ll show what’s in the package, and what it looks like after boot, before going through more thorough testing in the second part of the review. 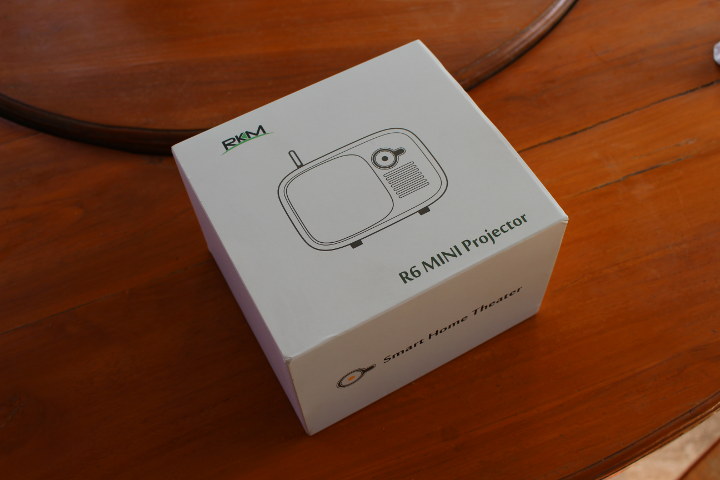 I received a pink model, but the company also offer other colors.

The projector’s lens is protected by a black cover. The projector feels quite heavy and indeed it weights over 700 grams.

All ports are placed on the rear panel with a 3.5mm audio jack for headphones or external speakers, MicroSD card slot, two USB 2.0 ports, the DC port, the IR receiver window, the power button, focus rotary button and the WiFi antenna. We can also read a 5,600 mAh battery is included in the device. 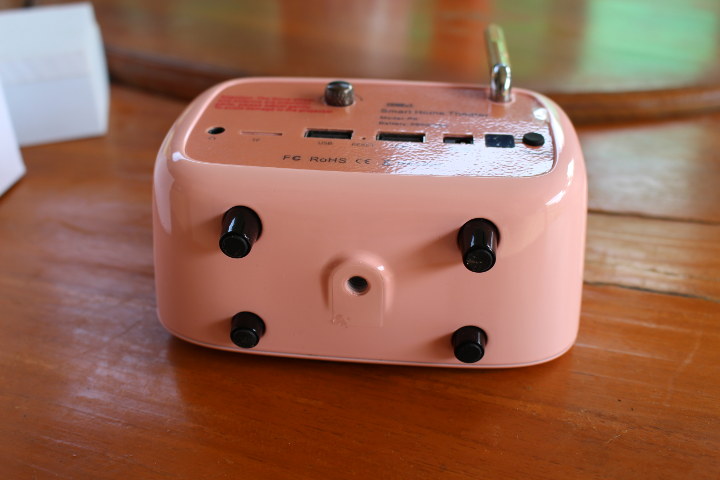 The projector can be placed on a table or desk thanks to four feet underneath, or placed on a tripod with a standard thread.

A tripod is included in the package together with a 5V/2.5A power supply, a remote control, and a user manual that doubles as a warranty card.

.. and we can press the power button for 3 seconds or more to turn it on (the user manual was useful here:)… It will take half or minute or so to boot, and after adjusting the focus with the “focus wheel” this is what it looks in a not-so-dark room.

Not too bad. We’ll use the IR remote control to navigate the launcher for now, but I’ll probably connect an air mouse for the full review since it will be much easier to use that way. 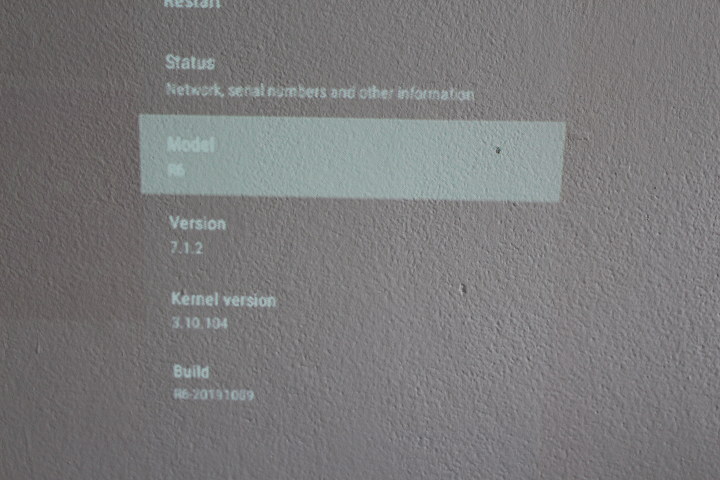 I just went to Android settings to look at the software version and we have Android 7.1.2 running on top of Linux 3.10.104. So it must be based on one of the older Rockchip quad-core Cortex-A7 processors, but we’ll find out more in the second part of the review.

Rikomagic R6 mini projector is not for sale online at this time, but instead, Rikomagic welcomes inquiries from resellers and distributors, and you can contact the company via the product page if you plan to order in quantities. [Update: The mini projector is now sold for $269 including shipping on Aliexpress]

3.10.104 was issued exactly 3 years ago (more or less 3 days)! Congrats guys for not finding the willingness to apply the 978 fixes that followed the next year, and for not migrating to a still supported one since. And this thing has WiFi connectivity…

I urge anyone to stay away from such a backdoor in your house or office, which is very likely remotely exploitable allowing to remotely steal your screen casts and/or documents plugged on the ports for example.

Try opening this in an image viewer at native resolution for the projector and for the image viewer and see whether you can actually see each of the red, green, blue, cyan, yellow, magenta, white, and black pixels clearly.

I can see the color, but everything is quite dark. The image has a 1598×1078 resolution, while the projector uses 1280×720, so obviously the image is resized by the image viewer. Should we use that type of image with the native resolution of the projector instead?

This makes as much sense as does a radio disguised as a projector. What’s the point ? (lol)

My girlfriend said “it’s cute” when she saw it, so maybe they expect more people to like the form factor.

I see your point – even the AMC Pacer (automobile) had its fans lol.