We’ve been covering mini PCs for several years, but I’ve just noticed we never wrote about Lenovo mini PCs probably as they were no that small, and higher price points. But today, I’ve come across Lenovo ThinkCentre M90n Nano IoT, a fanless mini PC powered by a dual-core Intel Celeron 4205U or Core i3-8145U Whiskey Lake processor. 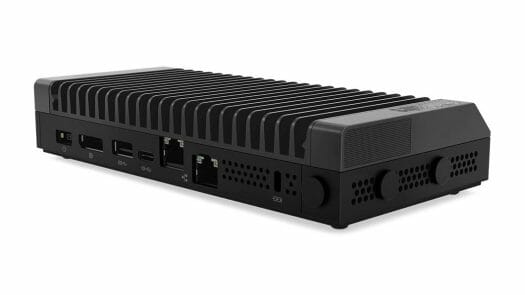 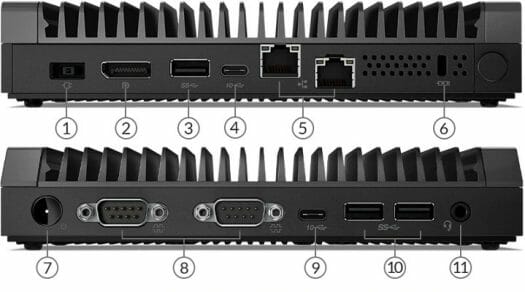 ThinkCentre M90n Nano IoT appears to be available now for $355 and up depending on options. Alternatively, there’s also the more powerful ThinkCentre M90n Nano without cooling fins nor serial port, that sells with Core i3 to i7 Whiskey Lake processors up to 16GB RAM for $439 and up.

It could be good for POS as it has featureful connectivity (that’s likely why they’ve put true RS232 by the way). It could possibly also make a reasonable office machine for low use.

What advantage does a “proper” serial port still have nowadays? The times of direct access to port numbers are long over, isn’t it? We are in the meantime preferring USB serial converters due to their better isolation of the ground and chassis.

When you have to connect a ticket printing machine or a credit card reader for a point of sale, you’d rather limit the number of cables and adapters to the strict minimum. Connect your DB9 cable, screw it and it will last 30 years if needed. Do the same with a USB-to-DB9 adapter and it gets disconnected every 2 weeks on average, requiring a reload of the application since the port changed name when replugging it while the application is still bound to the port, not to mention the risk of short-term failure due to the low quality of the… Read more »

Ok valid point! Safely locking USB connectors and by extension also HDMI has never been a concern to the developers. We fought with those and RJ45 plugs in aircrafts not only due to vibration.

Nowadays we are only using serial for maintenance.

What i can’t understand is why windows is doing this renumbering game, it’s outright stupid.

It’s not only windows, linux as well. And you don’t have a real choice, the existing device cannot be release while it’s still in use by the application. This is typically the case when you have a ticket printer. It would be better solved by the application if it would only open the device while printing and the close it afterwards, but the reality is that it would not completely solve it since chances of unplugging are higher during operation anyway (moving parts = vibrations = moving cables).