Enrico Zini was working on a digital signage solution based on Raspberry Pi 4, then he set the video output to 2560×1440, and all hell broke loose. And by that, I mean WiFi stopped working.

It was not obvious at first but after a full day of debugging, trying both micro HDMI outputs, different HDMI cables, three different Raspberry Pi boards, different power adapters, Raspbian Buster and Buster Lite, different MicroSD cards… He could reproduce the problem in all conditions, all he needed to do was to set the resolution to 2560×1440, and WiFi would just stop working. Setting the resolution to 2048×1080 or lower, and all WiFi connectivity issues disappeared. 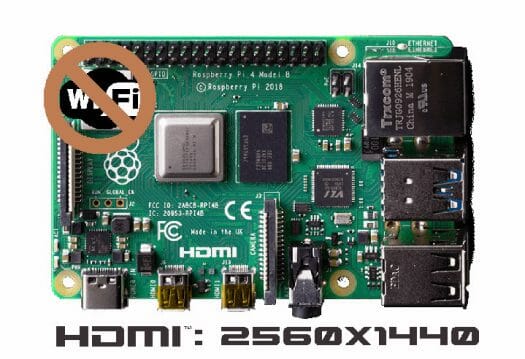 He did not test at higher resolutions, and another user reported a similar problem happening at 2.4 GHz, but not at 5 GHz, albeit when setting HDMI output to 1920×1080. So it looks like interference, but as noted by some it’s also surprising because the HDMI port and the WiFi module and antenna are not exactly close to each other.

Android Authority talked about the issue with Raspberry Pi founder Eben Upton, and with the limited information available, he speculated that it could be due to poorly shielded HDMI cables. Since then, Enrico updated his report explaining he used an HDMI cable bought from the Raspberry Pi store in Cambridge, and also tested another HDMI cable with a micro HDMI to HDMI adapter.

Mike Walters went further to investigate the issue and used his HackRF board as a frequency analyzer. This is what it looks like at 1920×1080 resolution:

Mike noticed a big spike that could interfere with Channel 1 of the WiFi connection. It’d be interesting to see if forcing a different channel could be a workaround.

The theory behind the issue is that the HDMI pixel clock is running at 241.5MHz at 2540×1440 60 Hz, which leads to a TMDS (Transition-minimized differential signaling)  clock of 2.415 GHz that may interfere with WiFi in the Raspberry Pi board. Again if that’s the case changing the output frequency to 50 Hz or 30 Hz should make the problem disappear.

Nobody has a definitive answer, but it looks like the Raspberry Pi 4 may be susceptible to interference. If that’s the case, the board would not be the only hardware to suffer from a similar issue, as some commenters on the Hacker News thread that alerted us about the problem reported their MacBook Air’s WiFi would stop working when connecting a USB 3.0 hub or other USB devices.

Yes they do, in order to test them they sell them to thousands of fanboys 🙂

It probably matters to the FCC as putting out noise like that makes it non-compliant.
IIRC you can get in big trouble for importing and selling stuff that you know is non-compliant.

The RPI 4 has got an FCCID @ https://fccid.io/2ABCB-RPI4B
But I understand the FCC only tests/cares if WiFi / Bluetooth will interfere with other devices or frequencies.

To be fair, I’m pretty sure most companies did not test whether setting HDMI to 2560×1440 @ 60 Hz or other resolutions would interfere with WiFi.

Problems with interferences seem sadly common, for instance, I got a MediaTek phone a few years ago, where I had to disable WiFi to get proper GPS accuracy: https://www.cnx-software.com/2015/04/26/improve-mediatek-mt6752-gps-accuracy-by-turning-wifi-off/

>The RPI 4 has got an FCCID The FCC reserves the right to revoke certification if it’s later found that something didn’t actually meet the requirements. I’m not sure having a valid FCC certification while knowing your device is non-compliant actually helps on issues of importing non-compliant devices. Seems almost the same as importing something with an FCC certification that has been significantly modified to me. >To be fair, I’m pretty sure most companies did not test Maybe not but this just shows that the test setup they provided for the test lab wasn’t good enough. They should have spotted… Read more »

It amazes me on what lengths you go to for covering up/defending flaws. Do you think before writing such things?

It’s $35. It’s not meant for people without technical skills.

What technical skills are going to alleviate the issue of running 2560×1440 with WiFi?

One can use CVT (without reduced blanking) timings I guess. It will use 312.45 MHz pixel clock on that resolution and refresh rate. Or maybe CVT-R2 if your monitor supports it

Also, similar problems, but with RAM throughput, were on Allwinner A10
https://ssvb.github.io/2013/06/27/fullhd-x11-desktop-performance-of-the-allwinner-a10.html

This problem is different and affects all machines sharing the same memory bus for graphics and CPU. It’s well known, even 15 years ago I was used to switch my laptop to console mode to build my kernels because it provided a substantial performance gain.

What is reported in this article has nothing to do with sharing a scarce resource, it’s about malfunction caused by radio spectrum disturbances from other components of the same board.

Typos (only mentioning because there are more than usual, you alright Jean-Luc?): “different power adapter” should be plural “Setting the resolutions” should be singular “The did not test at higher resolutions” he “happening at 2.4 GHz, but at 5 GHz” happening not at “So it looks like interferences” should be singular “cable bought from Raspberry Pi store in Cambridge” the raspberry pi store “and although test another HDMI cable” and also tested “Mike noticed a big spile” spike “looks like Raspberry Pi 4 may be susceptible to interferences” the raspberry pi 4, interference “It’s that the case” if that’s the… Read more »

I’m not sure why it happens. Sometimes my head is not clear, and I think about other things at the same time.
I’m using Grammarly to reduce the number of typos, but somehow it did not pickup many in that post.

About using the plural for interferences, I genuinely thought it was the correct form, but apparently not.

So, let me get this straight – this problem affects only US and Japan users with their crazy 60 Hz refresh rates and we in Europe are quite OK?

If so this could actually be a honest reason for them not noticing during QA.

Not at all. You’re mixing refresh rate with electric cycles. The Mhz from the HDMI signaling stands for the data throughput it delivers, which in that specific case seems to do some awkward interference, which will have to be solved by either a blob patch or a board revision. Let’s hope they fix it by updating the firmware, I don’t plan to buy a new rpi4 because they made a silicon shit. I was affected by this issue trying to use it with dual monitor on our office and I turned crazy finding out why this piece of crap was… Read more »

No, I’m not. No human being in a right mind, who is fond of his health and eyesight in particular, should set refresh rate of display device to something other then multiples of mains frequency. Setting TV or display refresh rate to 60, 120 or 240 Hz in Europe is a sign of either greed or ignorance.

An EU based computer monitor running at 2560×1440 is most likely to also be running at 60 Hz. It’s only TV based solutions that have to handle 50/60 Hz changes.

And it should not be like this. Because it’s bad for your eyesight.

Hmm… is it about 50 vs 60Hz or are you referring to something else?

You do know that the refresh patterns of computers aren’t synchronous with their AC power inputs, right? Secondly, with any modern display type (non-CRTs) there is no inherent ‘blink’ when performing a refresh. The backlight is often PWM’ed at a very high frequency completely unrelated to the refresh rate.

To summarize, you have absolutely no idea what you are talking about.

Add the fact that modern lighting also does not operate at mains frequency and not one part of David’s concerns are valid in this day and age. A CFL operates from an electric ballast that has its frequency defined by what is best for the bulb and a good LED based light is driven by a AC to DC based circuit. Now a bad LED based light can have an amazing amount of flicker as the AC to DC circuit does not end up suppling a constant current. If you have such a LED light the answer is to bin… Read more »

Indeed, I have some odd white icicle Christmas lights up that drive me crazy fory to this issue.

omg, that sounds like a fairy tale. Never could think somebody would say such a thing, world is amazingly rich 🙂 But seriously, that’s not true at all. My country provides 50hz electric and I tell you as many times as you want that playing at 60hz instead of 50hz is the way to go, simply because your eyes can notice the difference, not because it needs to match or being multiple / divisor. That theory is yet valid in resolution upscaling, where for example a device with 960×540 would look a little better than one with a little higher… Read more »

>Japan users with their crazy 60 Hz refresh rates and we in Europe are quite OK?

Japan actually has 50Hz and 60Hz line frequencies which confuses your theory a little further I think.

It’s $35-$55 bucks. Find me another SBC running a quad-core Cortex-A72 with up to 4GB of RAM for that price. I remember a few years back buying a Nano Pi with built-in WiFi that just didn’t work. The fix was to desolder an 0402 resistor. No thanks. Is the RPI 4 perfect? No definitely not. Could it have more features? Yes. Should’ve they done more testing? Absolutely. But the RPI 4 still has the best support and best hardware for the least money period. And to the best of my knowledge the RPi foundation is able to do all this… Read more »