Eny EM95 was first unveiled in early July, as the flow of Android TV boxes based on Amlogic S905 started. Eny Technology has now sent me a sample of this device with the typical 1GB RAM and 8GB Flash, but it adds an LCD display on the front panel. Today, I’ll take a few photos of the device, and open it to find more details about the hardware.

I received the device by DHL in a colorful retail package referring to EM95 as a Quad core Smart TV box, with some specs on the back, which I already listed in my first post. 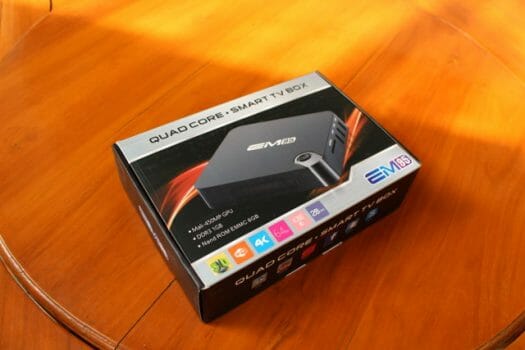 The media player ships with a 5V/2A power supply, an IR remote control with IR learning function requiring two AAA batteries, an HDMI cable, and a user’s manual in English.

The style of the box it’s pretty neat, and I usually like device with an easily accessible power button on the top.

The front panel has the LCD display with 4-digit for time and some simple text, as well as icons for CVBS, HDMI, USB, CARD, APPS and SETUP.  One of the side features a full-sized SD card slot, and three USB 2.0 host ports, while the rear panel comes with a 5V power jack, optical S/PDIF, HDMI 2.0 and AV (composite) output, and a Gigabit Ethernet port. 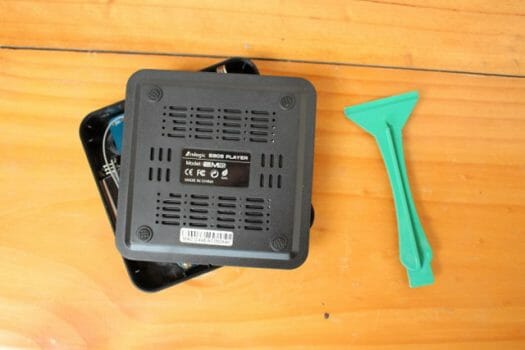 The heatsink is large than on other low cost Amlogic S905 devices I’ve reviewed, but I’m quite not sure the M9 metallic plate attached to the botto, is useful for cooling as it is not connected at all with any component of the board, nor the heatsink. The WiFi antenna is glued on top of the LCD display. 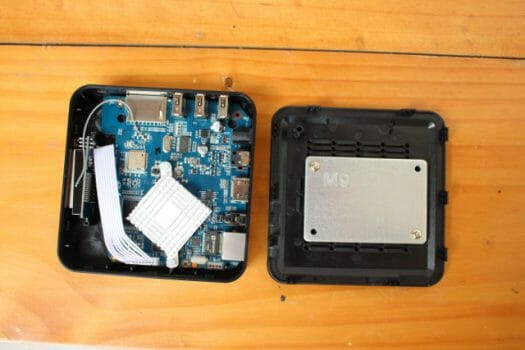 I’ve loosen the two screws holding the board to the case to have a closer look.

Eny has gotten used to include low-end NAND flash is many of their devices, so I’m pleasantly surprised to find Samsung KLM8G1WEPD-B031 eMMC 5.0 flash has been used in EM95 to provide 8GB internal storage. I can’t find the full details about this exact part number but KLM8G1WEMB-B031 has theoretical read and write speeds of  100MB/s and 6MB/s. So while apps and boot should be relatively fast, some slowdowns may occur while using the firmware, for example while installing apps, or copying files in the background. Amlogic S905 SoC is also coupled for two NANYA NT5CB256M16DP-EK DDR3 chips (512+512MB RAM). Wireless connectivity is achieved with Ampak AP6212 module supporting 802.11 b/g/n and Bluetooth 4.0. Other chips include Genesys GL850G USB hub, and for Gigabit Ethernet Reatel RTL8211F transceiver and GST5009M magnetics are used.

The board is named S9 V1.1, and you’ll find the 4-pin UART console on the top right of the board, as well as 9-pin header to connect the LCD display.

There’s not much to see on the back of the board, except for a sticker with a MAC address whose prefix C4:4E:AC redirects to the usual Shenzhen Shiningworth Technology, as with other Eny devices.

I’d like to thanks Eny Technology for sending a sample, and distributors or resellers can contact Eny for purchasing in quantities via EM95 product page. So far, I could only find the device for sale on of Aliexpress seller for $53.42 including shipping.

I’m not sure I’ll have time to review EM95, but I’ve found a video (date July 15th) showing it has the same launcher and settings as Beelink MINI MX, so I’d expect performance to be very similar.

Somewhat OT, but is there, to anyone’s knowledge, amlogic boxes with USB3?
I’d gladly make on of those my cheapo NAS…

@koying
I don’t think any Amlogic SoC support USB 3.0 nor PCIe, so I don’t think USB 3.0 is feasible on these devices.

@Gabe
Cool 🙂
Thanks for the info.

S908 which is renamed to S905M will have USB 3 and USB 3.1 more popularly known as USB Type C connector. It will aupport VP9 hw decoding and will be eligible for Android TV certifications according infos from Xiaomi

@AnkitT
Enough to do what? It will depend on your application.

@Techy
Be careful. “USB 3.1” is most likely “USB 3.1 Gen1” (limited to 5Gbps! Only when “Gen2” is mentioned we’re talking about 10Gbps and switching from the inefficient 8b10b encoding to 128b132b!) and the Type-C connector is not related to USB 3 at all. Type-C is great since you’re able to transport completely different protocols over the wire (DisplayPort, Thunderbolt, even native PCIe) and you have way more opportunities to provide power to devices *or* the host!

@Techy
I have confirmation from Amlogic that there will be another revision of S905 (did not ask about SoC name) and it will support VP9. However, keep in mind that S905 SoC is low cost SoC and it’s unlikely that they will add features like USB3 in that SoC. For S912 it’s expected to include USB3. Also according to kernel sources and TV platforms available in Android SDK I think that they will abandon Mali 450 and switch to Mali T83x GPU.

I have an EM95 here. Box works quite well. One problem though. Playstore reports about every app as incompatible with the EM95.

HansHa :
I have an EM95 here. Box works quite well. One problem though. Playstore reports about every app as incompatible with the EM95.

Yeah, I experience the same issue, and already reported it to the manufacturer. Also, it contains the same 10mb bug mentioned regarding other s905 boxes. And it comes pre-rooted (you’ll need to install Supersu and uninstall superuser to get it to work well though)

the UI looks the same as my mini mx

@Oren
Most likely torrent download speeds in not hardware, nor firmware related. Have you had faster speed with the same apps on your Android smartphone for example? It may also depend on the number of seeders are the time, and Internet connection. The speeds you get 500 KB/s to 1MB/s look not bad to me, but I don’t know your broadband plan…

To double check, you should try to get a local torrent, it would be a more reliable test than over the Internet.

So does Pulsar work on S905? my experience shows otherwise (same as other 64 bit boxes)

@Oren E
I had never heard about Pulsar… Note to self: add-on for Kodi/XBMC for torrents: http://forum.kodi.tv/showthread.php?tid=200957

@Jean-Luc Aufranc (CNXSoft)
Actually, I also tried Kmedia and another torrent streaming add-on – all with the same results – after installing them with content providers. I think one or more of the libraries that handle torrents inside Kodi is compiled for 32bit only, and that may be the reason for the issues.

@Jean-Luc Aufranc (CNXSoft) what are all those Orens? I am the real oren, and I only send the first post. I tested it with a computer and I get 5MB/s my plan is 50mb/sec ~ 5MB/s.. In the PC I get sometimes more then 5 and sometimes less, but it is stable.. It does not go up and down as you can see in the videos.. I think the biggest problem here is the unstable speed.. not the size of the speed.. just look how unstable it is. And I wondered if this instability is because of my specific box?… Read more »

Oren : @Jean-Luc Aufranc (CNXSoft) what are all those Orens? I am the real oren, and I only send the first post. I tested it with a computer and I get 5MB/s my plan is 50mb/sec ~ 5MB/s.. In the PC I get sometimes more then 5 and sometimes less, but it is stable.. It does not go up and down as you can see in the videos.. I think the biggest problem here is the unstable speed.. not the size of the speed.. just look how unstable it is. And I wondered if this instability is because of my… Read more »

Has anyone used EM95 from ENY to run Linux on it ? I’ve extracted the DTB file from EM95 and copied that onto the SD card with Ubuntu Image (this SD card image works with MXQ Pro no problem). But I can’t get this board to boot into linux. I can share the logs if anyone has been able to boot it successfully.