Those can be used for brain interfaces which according to a recent Ericsson’s report may become commonplace by 2030 with users just thinking about commands, prosthetic arms, health and disease monitoring, and so on.

Starcat has designed the HackEEG shield to experiment with all those three methods using an Arduino board and electrodes. 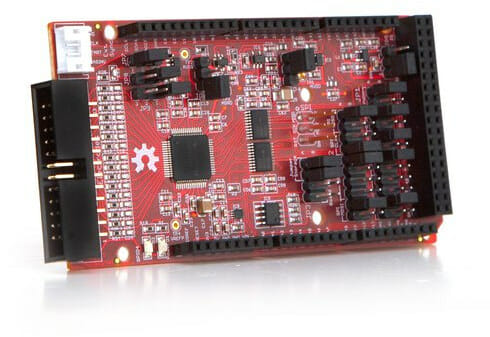 The board is open-source hardware and certified by OSHWA (US000027) with all files such as the Eagle CAD schematics and PCB layout available on Github. The company provides a Python client software and APIs to enable streaming of real-time data via Lab Streaming Layer, Pandas, NumPy, and other solutions.

Starcat also worked on a fork of OpenBCI to stream and visualize data as shown on the laptop above, or the screenshot below. OpenBCI works on Windows, Linux and Mac OS.

HackEEG has already been used by various universities and organizations that work on neuroscience research, but the board does not have any medical certifications (e.g. FDA, CE, IEC), so it is not officially approved for medical or diagnostic use.

The Arduino shield has launched on Crowd Supply with a $46,500 funding target. Rewards start at $335 for HackEEG 8-channel Starter Kit with one HackEEG board, a ribbon cable, and a connector board with 10 DIN 42-802 touch-proof electrode connectors (8 inputs, 1 reference, 1 ground), and goes up to $,1775 for the HackEEG 32-channel Deluxe Kit with four HackEEG board, ribbon cables and electrode connectors, as well as one Arduino Due, 40 silver chloride EEG electrodes, Ten20 conductive paste (4 x 2oz), and NuPrep prep gel (4 x 4 oz). If you want something that works out of the box make sure you get a kit with an Arduino Due board and some electrodes. Shipping is free to the US and adds $15 to $30 to the rest of the world. The rewards are expected to ship to backers in April 2020.