We first found out about GigaDevice GD32V 32-bit RISC-V MCU last summer, as an update/alternative to the earlier STM32 compatible GD32 Arm Cortex-M3 microcontroller from the company with higher performance and lower power consumption, while keeping the price identical.

The first low-cost GD32V development board we covered was Longan Nano going for $5 with an OLED display and an acrylic case. If you don’t need either or want to access all pins from the 48-pin MCU,  you can now order an even cheaper GD32V RISC-V MCU board with Polos GD32V Alef going for $2.99 on Analoglamb website. 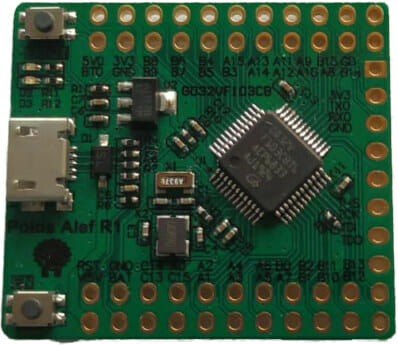 The board uses the same GD32VF103CBT6 as on Sipeed Longan board, exposes more I/Os, but also lacks a MicroSD card socket and connector for SPI LCD display. You could always connect your own SPI display with some soldering though. 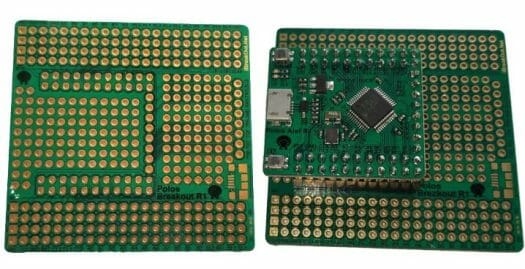 There’s also an optional breakout board that sells for $1.49 as shown above.

There are two main options for software development:

AnalogLamb also has a Github repo for Polos GD32V Alef board but it’s empty at the time of writing.

The specs look quite appealing, with lots of diversity in the connectivity options. I’m not seeing PWM outputs, but these may possibly be implemented using the timers.

Regarding the VBat input, it doesn’t go to a regulator nor charger. I suspect instead it’s used as the RTC battery’s power input.

Not sure if black silk screen on a green pcb is the best idea. Makes it real hard to see the silk screen.

Definitely agree, I noticed this as well and it bothered me too. At this price I won’t complain but it certainly is something they should improve.

Is anyone using these type devices yet? Good replacement for M3?

Cannot really recommend them currently. I tried the Longan. Hardware might be okay. But software sucks. SDK is buggy, Arduino support very incomplete. USB code does not even compile and is not working. No response to bug reports. Take a look at the issues.

Besides the two software development tools mentioned, Seggers Embedded Studio (free for non-commercial use) and PlatformIO are other options.

Thanks for the tip

He should have made it bluepill like, and breadboard compatible. This dual row is a nightmare for breadboards.

Next step is to desolder a bluepill, and resolder a GD32V.