Fingerbot is the place where IoT meets analog and creates a solution for smart home automation that works with Alexa, Google Home, Siri, and many smart home apps.

Adaprox, a team of engineers, programmers, and designers, designed the finger-sized device that can handle on/off for devices, repetitive motion tasks, toggles or switches.

The little robot can work through voice or app, and can handle all activation and deactivation of traditional appliances, lighting and can even use its soft “finger” on a touchscreen for repetitive tasks in the home, all done mechanically.

How Does It Work

Fingerbot is designed to be attached to the device it is controlling with double-sided tape or velcro.  This creates a firm grip on the surface so that its finger can control the device properly.  The velcro option allows for switching Fingerbot between appliances, and also makes sure there isn’t any loss of grip over time.

Expand To Control All Fingerbots

The Adaprox Bridge allows for voice control, IoT of all devices and IFTT, which allows Fingerbot the opportunity to control devices based on how devices are interacting rather than just by user control. Routines for control of devices can be set to almost any type of interaction. 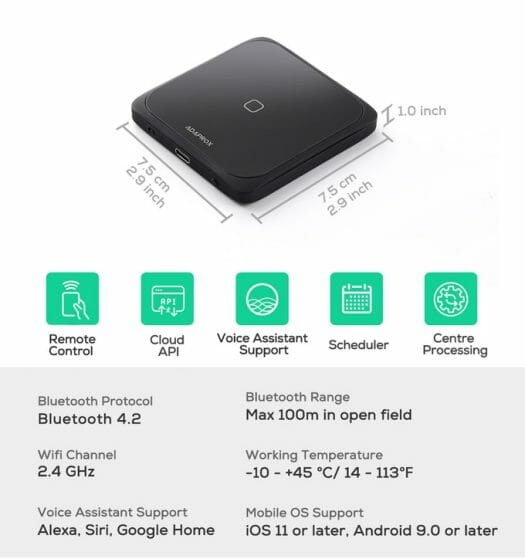 Two Major Features of the Bridge

The Adaprox Bridge also increases the range of the BT 5.0 allows for more control of more Fingerbot devices.  The company states that all Fingerbots can be controlled through the Adaprox Bridge. 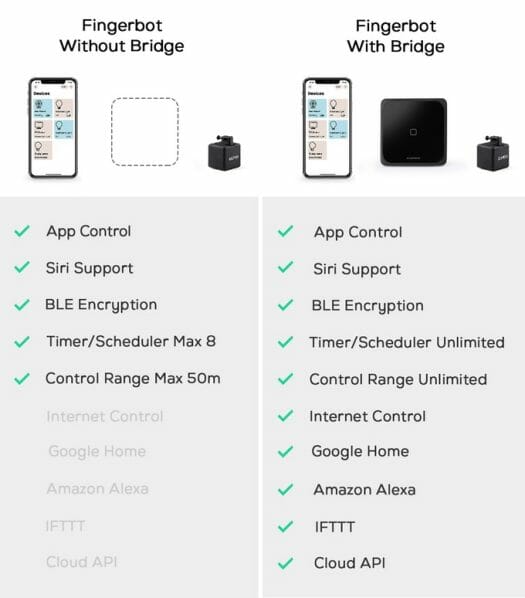 The company has also stated that the battery in the Fingerbots only needs to be recharged biannually. There is a Type C USB port on the Fingerbot that allows for a full charge, usually within an hour. 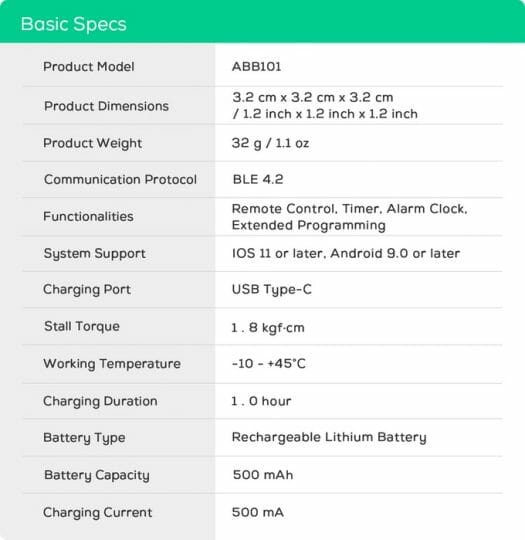 The cost reduction, between a smart device or appliance and a Fingerbot, controlled traditional appliance or device is significant, as reported by the company.

The Fingerbot costs $25.00, for the base robot, with specials and discounts for the early bird backer. Arm Tool Kit is $10.00 and the Adaprox Bridge is approximately $44.00. There are a number of packages available and discounts also seem to be plentiful.

The robot is due for shipping in May 2020 and is well beyond its original funding target on Kickstarter.com.

The Adaprox SDK is found on GitHub once the source material is published for use by anyone. At the announcement of the Kickstarter campaign, the SDK was due soon.  An option designed for the makers who are usually looking for inexpensive ways to automate their homes through IoT.

The Kickstarter Campaign has more information. Including timeline and featured listings.

This is one of those devices that I just don’t get.

it’s simple: think of it as an digital-to-analog converter

Seems more similar to microbot push than switchbot bot, having a short vertical throw. But switchbot has a bigger ecosystem and just added the curtain motor.

Where can I buy it? I think it’s designed for the home device which doesn’t support Google Home or Alexa. They can control via Fingerbot remotely!

I think this is neat, but one thing I noticed (seems obvious in hind-sight) with the video showing it hitting a typical light switch (upper-right of this image http://tinyurl.com/yhbq2dlj) – you would need a second fingerbot to push the switch back to its original position. Kinda kills it for me for that.

That would kill it – for sure – what about double-sided tape or an arm extension – there are some design options for the arms (at a cost – I am fairly certain). Thanks for pointing that flaw out to us here.

I also laughed when I saw that, but later in the video, they show an arm with a suction cup that allows for ON/OFF on this type of switch.

The problem whit that solution is that suction cups only work whit a limited amount of force, time ago I buy some suction cup things for the kitchen, they fall all the time. The other problem is the glue; in the video they show is a double side glue patch, and I clearly remember that small bathroom spray deodorant they use to sell(I even remember the TVad show an Asian kid) THE THING ALWAYS FALL OFF, this hapen even whit the 3M branded glue patch, an is because the constant mecanical movement. I pass on this one, change the switch… Read more »

Wait this is a joke right?