Ninja Blocks is an company providing open source hardware solutions for home automation. Their first product was called Ninja Blocks Kit which includes a Ninja Block (Beaglebone + Arduino based gateway, but they now also support the Raspberry Pi), sensors, sockets, cables, and a power supply, and works with Ninja Platform, an open source software framework. The goal was to simplify the process of developing automation applications by taking care of all low levels tasks such as electronics, embedded programming, network protocols.., and letting “end users” / developers focus on their application. The company is now working on a new version called the Ninja Sphere, including a “Spheramid” gateway, location waypoints (Bluetooth low energy tags), and smart power sockets.

Here are the key features of the gateway:

The waypoints are USB powered BLE tags used to locate objects (e.g. keys) or living creature (e.g. dogs) by using Bluetooth trilateration – a mechanism whereby the intersection of 3 or more overlapping signals can determine the location of an object. Since this method is not quite accurate enough, they also use machine learning algorithms to build a model of your home to provide better accuracy.

The smart power sockets are relays and power meters using Zigbee HA to communicate with the gateway. Sockets are available for US, UK, Europe, and Australian socket standards. 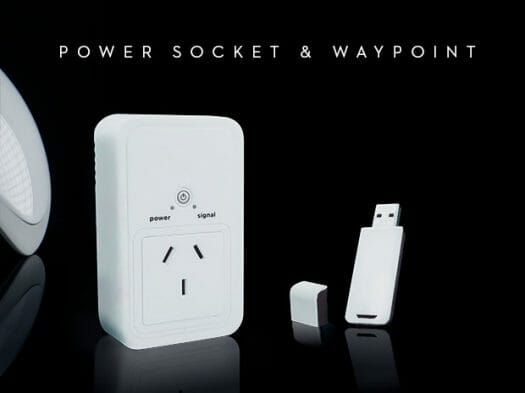 The Ninja Sphere kit allows to get started, and control your electric appliances (e.g. lights, fan, heater…), monitor your power consumption, and the locations of your pets with your smartphone, or even only gestures, but the real interesting part is the list of supported devices and platforms:

Controlling cameras, smart light bulb and sockets, seems obvious for an home automation system, but what can you do with media platforms like XBMC and Squeezebox? It turns out the Sphere can automatically pause the video or music playing in your TV, if you receive a phone call. ODB2 support will let you monitor your car via Bluetooth. One important usage for the Sphere is to alert you on your phone or pebble watch if something is odd. You’ve left the house, but forgot to turn off the lights and/or the heater? The Sphere will let you know, and let you take action. If you’ve put a BLE tags on where valuables are stored (jewelry box, wine cellar…) and the goods are moved, the Sphere will alert you. It can also let you know you’ve forgotten to take your umbrella, if rain is expected. And so on… You can watch the video below for an introduction, and see some of the use cases mentioned above.

Ninja Sphere will eventually be fully open source, once the project development is completed, and the product is ready to ship around June 2014. This will be a gradual open source release, and they’ve already done so with the Ninja Blocks hardware and client code, with the latter possibly being reused with the Ninja Sphere.

The company is looking for funds via a Kickstater campaign to complete development, and start mass production. They have different pledges depending on the size of your home:

All pledges above include international shipping, a T-shirt, and a sticker. There are also some early bird discount for the pledges above, where you could save up to $90, but most of them are already closed due to the popularity of the project. The company looks for 115,000 AUD, but they’ve already received pledges for over 105,000 AUD within 2 days at the time of writing, so it’s a near certainty the project will go ahead. There’s still 58 days until the cmapaign completes, and IMHO some parts of the project are not that much detailed. For example, I could not see any information about the smartphone application (No mention of Android or iOS at all), and web interfaces used to setup and control the Sphere. It’s probably using the same smartphone and web apps as Ninja Blocks, but a confirmation would be nice. Hopefully this will be addressed in updates during the campaign.

Well that was exciting, until I read its KS.

@rasz_pl
That’s a concern, but they already have a product called Ninja Blocks that supports at least some the devices and platforms listed above, especially all 433Mhz and WiFi devices. I can also see they can support Bluetooth by adding a USB dongle. So it’s possible most devices are already supported.

IMHO, they haven’t done a very good job at explaining the difference between Ninja Blocks and Ninja Sphere, how it all works together, and clearly describing the current development status. We just have am (hard to read) development schedule that starts in January 2014 (when they get funding).

@Jean-Luc Aufranc (CNXSoft)
Actually they explain it quite well. NinjaBlocks was more of a tinkerer’s toy – it is for people who work in IT, and know how to assemble an Arduino-based system.

NinjaSphere is a commercial product – easy to set up, manage, and use. Get one or two for your home, and set it up in no time, get used to it in a few days, and everyhing’s easier.

The best way to describe the difference would be comparing it to current NAS solutions – e.g. a barebone NAS running customized OS, versus a Synology home NAS.

@fonix232 Maybe you explain it well. 🙂 But on their kickstarter page, they don’t even mention Ninja Blocks, nor explain what kind of OS will be supported in the Sphere (Android, iOS, Windows Phone…), and on the main page in ninjablocks.com there’s just a link to the kickstarter campaign. We also don’t know about the setup. Do you just connect all these devices, and they automatically work together with minimum effort? The part that is easy to understand is what the Sphere is supposed to do. That part is mostly clear, but I can still see people ask questions like… Read more »

@Jean-Luc Aufranc (CNXSoft) They explain it well in the video, though I’m pretty sure they are not exactly clear with every details at the moment. The OS support (as they said) is universal – they wanted a platform that works on every device, without the need of an extra application. The connection is made through Bluetooth Low-Power, of course you have to pair your devices, and I guess the waypoints are automatically attached to the gateway. The difference between the used terms Sphere and Spheramid is explained too, in the video. The NinjaSphere is the name of the whole package,… Read more »