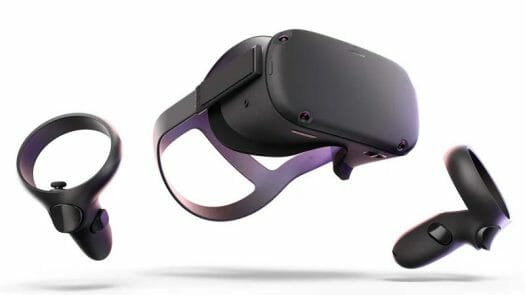 Hey, Karl here. I wanted to share some experimenting I did with the Oculus Quest we purchased as a family gift for Christmas. One of the features I was looking forward to was wirelessly streaming VR games from my PC.  It is not officially supported by Oculus but Virtual Desktop allows you to do this. Virtual Desktop is an app that can be purchased through the Oculus store.

Unfortunately, there are a couple of steps that need to be taken to stream VR to the headset. Oculus forced VD to remove the emulated VR feature in its official store version. Once it is purchased you can then sideload the emulated VR version through Side Quest. Side Quest is a simple tool that makes sideloading apps easy and has a bunch of demo and games that aren’t in the Oculus store. The instructions are easy to follow on the Side Quest website. I wanted to share a quick tip on how I was able to get a near-perfect experience.

All devices connecting to access points/routers have to share timeslots. Each access point/router has a radio(s) in them. Up to 3 in the most high-end devices. As you add devices the more sharing has to be done. Virtual Desktop recommends an 802.11ac access point/router. That is to try to give a blanket statement that should work in most situations. The problem is this is considered a real-time application and latency is the enemy.  What works well now can be interrupted by Suzy watching 4K Netflix. I wanted to have the best experience possible regardless of what other members of my family are doing at any given time. So what I did was to pair my Quest with an old router (with DHCP turned off) and didn’t connect any other devices to it.

My setup and a little history

I know not everyone can do this but wanted to share. I installed infrastructure cable for a living many moons ago. When I bought my house I wired every room with Cat6 and coax. I have 3 small switches. One at the cable modem and router. One in my office/workshop, and one in my living room. All just random Gigabit switches. We have been streaming since we got our Nvidia Shield in 2015 initially via remote servers then from my local pc. Before I had a gaming PC we used Nvidia’s GeForce Now. It worked very well for us but we grew out of it wanting to play newer AAA titles. In 2017 we got a PC to game with and have been using Nvidias in-home game-streaming feature since.

Both GeForce Now and in-home game-streaming has worked out well for us. I get to keep the machine in my office and living room pretty clear of technology. One thing I would point out….we may have just adapted to the latency. We still have a good time…..we don’t do much competitive gaming except Fortnite….but that is still just for fun.

My PC hosting the VR games is wired to an Ethernet switch and the dedicated access point is wired in the living room. I know this is not always feasible for everyone but if you can you should. As you can see below we have quite a few devices.

Ryzen 3700x with Nvidia RTX 2060. And the most important part is being connected via Ethernet. 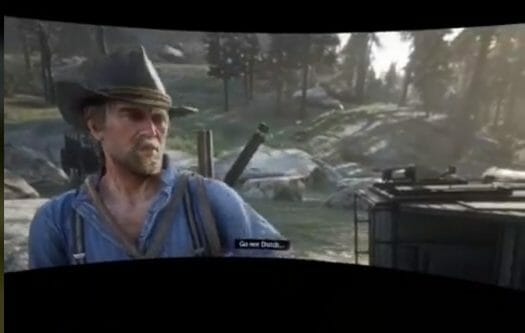 Another neat thing we have been doing is Game streaming and VR streaming at the same time….huh…what you talkin bout Willis. What I mean by that is Gamestream to the Nvidia Shield and use its controller as an input then start Virtual Desktop on the Oculus and stream the screen to the headset. It is a unique experience. Nothing is saying that this can’t be done at your pc but it’s sick that this even works. Playing on a screen that you have to turn your head to see the entire screen is an experience. The quality is not like playing on the TV but it is still pretty neat. My son enjoys playing Fortnite like this.

I ran into an issue once where my fps were limited to 30 and the experience was not ideal. It just turned out to be a glitch. Anytime I had fast movement there were big jumps in frames. It was very distracting. After rebooting it went away but while trying to deduce what this major hitching was I did some testing. My conclusion is that I need to make sure the fps of the game are at least the fps of the Quest at 72fps. I had to reduce the settings in the game to achieve this. I could not tell any visual reduction doing this as the Quest is not as crisp as looking at a monitor or TV anyway.

One final note….I have to say that the latency running Virtual Desktop is not bad in my experience. Like I stated before, we have been doing in-home Game streaming on the Nvidia Shield. When doing this dual streaming session I noticed that the audio is almost 100% in sync between what I hear coming out my TV and what the Quest plays. This shows to me that wireless Streaming to the Quest is very close to streaming to the Shield and is doing a good job keeping up with a wired connection. 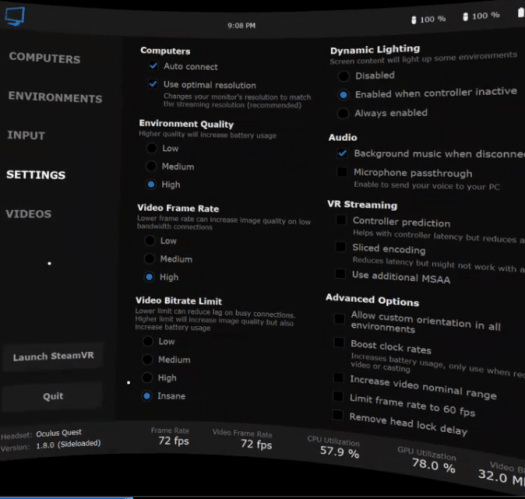 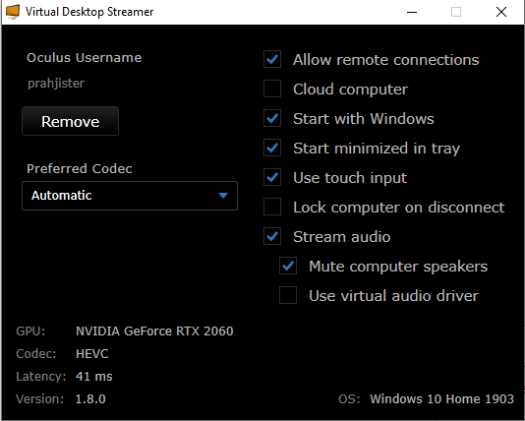 What I am suggesting is getting any dedicated 5 GHz access point in the room that you are streaming to for the best experience possible and your gaming PC attached via Ethernet. Even if you can’t have it in the same room I would suggest a dedicated access point. I did purchase a Unifi AP-AC-Lite but after testing I am going to use the old Linksys E2500 in the living room and finally upgrade one of my old 2.4 GHz Unifi AP’s.

One final thing to note…I was able to stream a game from my PC to the headset….then back to the PC via Sidequest tool called Scrcpy and capture via OBS and stream to YouTube. It did glitch one time….but still pretty cool it was possible.

Thanks for the review! Interesting setup.
I wonder what the biggest bottleneck is for improving the VR experience for Occulus engineers? The display resolution and miniaturisation, saturation of the wireless data link, battery life, hardware rendering on the external graphics card, software to display the rich scene at 72 fps or artists and data storage to make the rich and detailed 3d world? Many tough challenges.

Luckily there is a lot of really cool development in the VR area right now… some of which could be game-changing, especially for a product like a next-gen Oculus Quest. Look at some of the articles coming out of CES. One of the ones that looks incredibly interesting and beneficial is foveated rendering mated with something like the Tobii tech. There were at least two companies showing off solutions like that… Cool stuff. I’m in the same boat of wanting to do what Karl did, but didn’t actually pull the trigger this year… Guess I live vicariously through him for… Read more »

Tobii is a bit too expensive for casual use. It would be nice to have it in Quest 2, though I’d personally trade it for Snapdragon 865 or even 855 instantly. Snap 865 will give much more comparative horsepower than foveated ever will. And the majority of eye movements is involuntary, so if you have the control over just a single of your limbs, that limb would be preferable as a controller. With all respect, these solutions are most likely marketed as B2B and B2B is the last refuge of a VR company. Also, Quest 2 would fragment the ecosystem… Read more »

I was wondering if i should put in the article or not….but they have the same router refurbished on Amazon for $15

Price and ecosystem. Currently it all is a bit boiled by the anticipation of Alyx, we’ve yet to see if the momentum holds. Quest is the first HMD for normal human beings and seemingly it got the ability to run things from a PC (via a type-c usb 3.0 cable) only because the reception for Rift S was not what Facebook hoped for. The hardware is pretty good from the usability standpoint and okay-ish from hardware side. Sure, it has just 2.5-3h of battery life, but that’s more than enough for casual use. It’s snapdragon 835, so you’ve got circa… Read more »

just wanted to say lowering your settings does nothing since the quest isn’t doing any heavy work. Your quest basically uses the lenses to watch a stream. You will also notice if you have an fps overlay on pc that the game only runs at 72 fps when you play through the quest. Almost like it detects the quest has 72 fps and somehow sets it as the main monitor.

May I ask what latency as shown in Virtual Desktop did you get with the Unifi AP-AC-Lite? I have the same AP and I struggle to go below 40ms.