Wemos has designed some great WiFi IoT boards over the last few years with products like Wemos D1 mini or Lolin32 based on Espressif Systems ESP8266 and ESP32 processors respectively.

But the company has recently launched its cheapest board ever, with W600-PICO board going for just $2.10 + shipping. The board is based on Winner Micro W600 Arm Cortex-M3 WiSoC, and comes pre-loaded with MicroPython firmware. 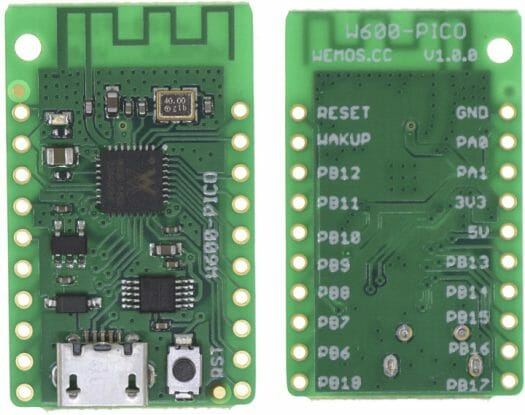 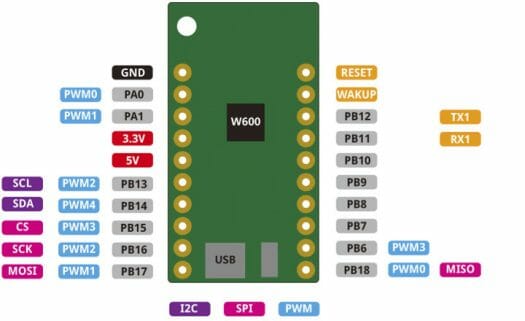 The board will ship with MicroPython firmware, and Wemos has set-up a Wiki for the board explaining how to flash the board, and get started with networking, I/Os, RTC, and timers. Users who purchased the board on Aliexpress appear to be satisfied, and one mentions “Micropython works immediately”.

We previously covered other boards based on W600 WiSoC, including Wio Lite board which supports Arduino. But we should note that board also comes with a SAMD21 MCU which controls a W600 WiFi module using AT commands instead. meaning the Arduino sketch is running on the Microchip MCU, and not W600. I may be wrong, but it appears there’s no Arduino support for W600 just yet, and the two main options for development are MicroPython or the FreeRTOS SDK.

I would have expected the company to design W600-PICO board in the same form factor as Wemos D1 mini in order to leverage the several add-on boards they have for the board, but sadly this is not the case.

(shipping pushes the price up though).

9 PWM can make it attractive for robots as it will make it easy to drive servos. And the overall specs look fairly balanced. Let’s see if its low price helps it take off!

I think most robotics servos use some of sort 1 wire serial protocol now. It allows them to be chained and allows you to get readings back from the servo like the motor temp.

It depends on the total budget, as smart servos are way more expensive than dumb ones.

I have some of these:

They aren’t that expensive for a servo of that size. I don’t think they are that much more expensive than a PWM controlled servo. The internal construction looks pretty good on them, they have some sort of Cortex M0 in them from what I remember so there’s some potential to make them better without having to mess around with horrible things like 8051 assembly.

These indeed look interesting, thanks for the link! On my hexapod there are 18 and I wasn’t willing to spend $60 on each to replace them, as I found a few years ago! BTW 8051 asm is not horrible, it’s painful. It’s just plain old intel CISC, it even features MUL and DIV which eases lots of stuff. It’s just that it’s 8-bit which is what makes it painful to use it for anything requiring precision measurements or calculations. And it’s totally outdated by 2020 standards!

horrible or painful .. either way having something you can work with normal tools and without swearing 90% of the time is beneficial.

8051 assembly isn’t horrible, but the crazy things grafted on to it to add more RAM, etc. later are pretty gross.

I think it is worth pointing out that the W600 Arduino package contains code from the ESP8266 Arduino package, stripped of the original copyright and license headers.

A gross copyright violation. Maybe they made a mistake…

Looks like an unintentional simple mistake caused by some script which updated the headers. I remember when Google did the same thing when “cleaning” GPL notice from Linux Kernel headers to use them on Android.

Wemos removed the board from their Aliexpress store. “Sorry, this item is no longer available!”