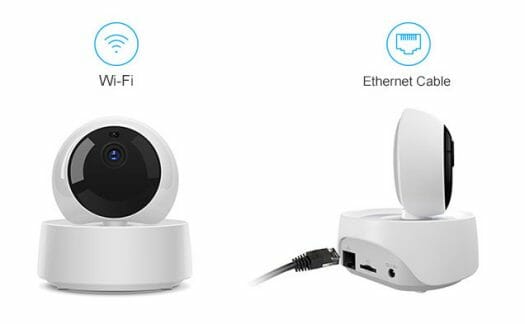 ITEAD Studio is popular for its Sonoff family of home automation devices include smart switches, smart sockets, and smart light bulbs among other similar products. But I’m just found out the company also launched an RTSP capable IP security camera called Sonoff GK-200MP2-B and sold for just $29.99 plus shipping and that can also be found for $32.99 including shipping on Banggood.

Like for other Sonoff devices, the camera works with eWelink app available for Android 4.1 & iOS 9.0 or higher. The camera supports alerts, push notification, two-way audio, and RTSP streaming. Upon motion detection, the camera will automatically record a 10-second video and store it in the MicroSD card. You can watch the videos via eWelink app, but sadly, there’s no way to watch recordings remotely on a computer, and insteadm the company tells customers to power off the camera, and insert the MicroSD card into their computer. Also note the camera appears to be exclusively designed for indoor use (no IP rating).

We should not be surprised the company decided to make its own IP camera since eWelink app has been able to convert phones into RTSP cameras for about a year. The camera was released at the end of last year, and there are already a few reviews on the net showing the main features.

Sadly, nobody seems to have performed a teardown until now, so we don’t know which processor ITEAD used in their camera.

Do you have one in hand? Could you test it with the Android app Onvifer? That’s an app that can control many ONVIF compliant cameras and it’s very useful.

They have erased most of the processor’s markings.
First line: K
Second line: GK

No idea for now.

I suspect it’ll be an ARM9 with some DDR2 in the package. There are a few companies putting out those types of chips. Probably running linux 2.6 or 3.old with an incredibly old busybox. Looks like it’s a BGA but there’s alternative pads for a QFN?

Looks like that one was hand assembled, and not cleaned afterwards!

Initial results of my teardown are @ https://wikidevi.wi-cat.ru/Sonoff_GK-200MP2-B_IP_Security_Camera. Open telnet server if I can discover password. Will try serial connection later.

Some info I was able to locate. https://www.unifore.net/company-highlights/goke-hd-ip-camera-solution-gk7101-gk7102.html. Others have hacked cameras based on this SOC see https://github.com/ant-thomas/zsgx1hacks.