Until last year, all STM32 microcontrollers were based on Arm Cortex-M “MCU” cores, but that changed with the introduction of STM32MP1 Cortex-A7 + Cortex-M4 processor a year ago.

That meant for the first time, we had an STM32 processor with an MMU capable of running Linux or Android. The company had three product lines:

All available in four different packages, and with or without hardware security (parts with A and C suffix) meaning we had a total of 24 parts.

STMicro has now announced 24 more parts whose main and only difference compared to the STM32MP1 processors launched last year us the bump of the Cortex-A7 core CPU frequency to 800 MHz from 650 MHz. The names are the same but “A” 650 MHz parts become “D” 800 MHz parts, and “C” processors with security become “F” processors @ 800 MHz. The new STM3MP1 800 MHz processors are software and pin-to-pin compatible with the 650MHz equivalent. 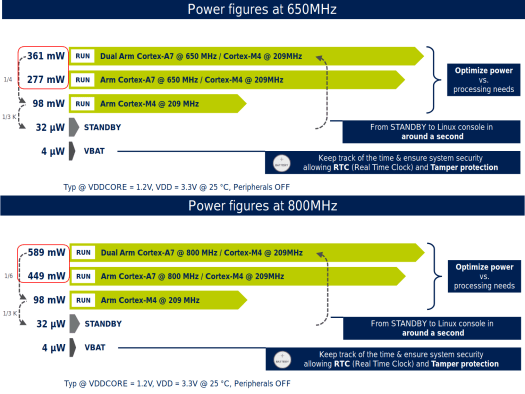 The company also mentioned software support in the press release with the OpenSTLinux Distribution to follow long term Linux kernel releases for the years ahead. STMicro is putting resources into development, as explained by Michael Opdenacker, CEO of Bootlin:

ST’s active participation to the Linux kernel community always impressed us. The simultaneous Linux & STM32MP1 availability made this launch attractive

In our opinion, ST understood what the customer’s interests are: mainline versions support of open-source projects, freedom to upgrade to newer versions, zero-cost availability of security updates, community support and security of their long-term investments. By sharing the same open-source DNA, Bootlin is proud to be an ST Authorized Partner and to offer to worldwide customers its engineering and training services on this platform.”

STMicro also pointed out improved Android & Cloud support, as well as STM32CubeMX, STM32CubeProgrammer, and the STM32CubeIDE debugger for the Cortex M-4 core.

STM32MP1 800Mhz processors are in production now, and the price starts at $4.83 for orders of 10k pieces.  You’ll find more information about STM32MP1 processors on the product page, and the most recent presentation (PDF).

Nice power figures for such a fast processor. How about we include the DRAM in them, ST? Given how much power is saved in other machines when downclocking or putting DRAM into self-refresh, I’m guessing it will at least double.

Unless I’m reading it wrong the powered up number looks fairly normal for an A7?
Including the DRAM power in the standby number would be useful as that number screams basically everything is turned off and the only wake up source will be an RTC alarm.

I think these would be perfect in cheap all-in-one boards for 3D-printers and CNC-machines as many today use the combination of STM32 and a Raspberry Pi to create a complete solution.