SQFMI has designed a (mostly) open-source hardware smartwatch based on an ESP32-S wireless module for WiFI and Bluetooth connectivity, and equipped with an E-ink display of 200×200 resolution.

Watchy also comes with a BMA423 accelerometer, four buttons, a DS3231 real-time clock, and a vibration motor. The watch should last around 2 weeks on a charge. 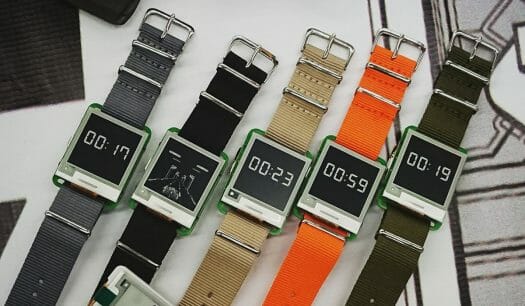 I mentioned the watch is “mostly” open source hardware because while the GERBER files, bill of materials (BoM) and the PDF schematics have been released on Github, the KiCAD schematics and PCB layout files have not so far. That still means you can understand the design, repair the design, or even make your own, but if you intended in modifying the design, you’d have some more work to do. Tom Fleet, writing for Hackster.io, does go through different sections of the schematics and explain what they do.

One the software side, the watch can be programmed with MicroPython or Arduino, and the Arduino library, as well as example Sketches to control the accelerometer, buttons and set watchfaces, can be found in another repository on Github. Watchy relies on two third-party libraries: DS3232RTC to handle the RTC, and GxEPD to drive the E-Ink display.

SQFMI (aka Squaro Engineering or SquarofumI) has a shop on Tindie, but Watchy is not listed there yet, and instead, they have a PayPal button on their hardware Github repository where the watch is sold for $55.

Awesome stuff and had to order it. But not getting a order confirmation besides the payment receipt from PayPal doesn’t really make me confident I’ll receive the goods.

Good start. But there is more to a watch than a connectivity and a screen.

Looks like these guys also make “Badgy” and sell on Tindie (https://www.tindie.com/products/squarofumi/badgy-iot-badge/). Currently out of stock, I got on the wait list.

Don’t bother. I just got it delivered. The paper-thin e-Ink glass is stuck, skewed, with a piece of double-sided tape on top of an ESP32 unit, leaving display edges and corners completely unsupported and free to catch on everything – it will get damaged without some sort of housing, which you are left to design yourself. There’s no solution to mount the battery – not even a patch of double sided foam tape, leave alone to protect it against damage – it’s supposed to get squeezed between the (populated) PCB and the strap. The wrist strap shares one slot with… Read more »