But some other solutions like Bitscope rely instead on full-sized Raspberry Pi 2/3/4 Model B boards. Another such option is IPTerra CloverPI board allowing up to 4 Raspberry Pi or compatible boards with 40-pin header to be clustered into a single unit powered by one power supply and connected via a 5-port Gigabit Ethernet switch. 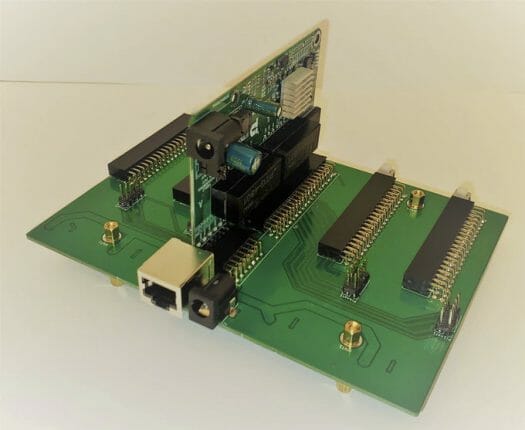 CloverPI is shown above without RPi boards. The mainboard includes four 40-pin headers, four 6-pin Ethernet headers for SBC’s, as well as one Gigabit Ethernet port, and one power jack. There’s also a board/card fitted in the middle of the latest version of the board that can take 12 or 19V power supply to power all four SBCs and comes with a 5-port Gigabit Ethernet switch.

This is what the setup looks like with four Raspberry Pi 4 boards and Ethernet cables plugged into CloverPI 1.4.

I can’t quite figure out why there needs to be not one but two power barrel jacks for power.

Features highlighted by the company:

Some of the potential use cases for CloverPI include K8s, Docker swarm, full-stack development via OpenStack, small office server stack, and Open Flickr stack. The good point of the solution is that it greatly reduces cable mess. No need for USB power supply for each board, short Ethernet cable, and no external Ethernet switch/hub required to interconnect the boards.

CloverPI has recently launched on Kickstarter with a $15,000 funding goal that is so far about 60% funded. Rewards start at $90 for the backplane, power & switch board, and four Ethernet cables. Shipping adds $8 to the US, and $20 to the rest of the world with backers expected to receive their reward(s) in November 2020. The retail price will allegedly be $149.90. A few more details may also be found on the official website.

Via LinuxGizmos and Geeky Gadgets

I wanted to do something similar to make a cluster board for Pi Zero boards. My design incorporated a USB hub instead of a GbE switch, obviously, as well as a USB-multiport serial interface to get console access. I think it is very clever to use the 40-pin header for mounting, power and console, and just running an Ethernet (or USB cable) from a header on the board to reach the other ports. I had been trying to come up with a board mounted Micro-USB connector, which would have been exceptionally fragile. This also makes it easy to toggle power… Read more »

What is it with these things? Is there an excess of PCB materials that needs to be used up with big useless boards?

What is it with these people? Is there an excess of ASCII characters that needs to be used up with big useless comments?

Wrong… What about the fuel spent to power your useless posts to be?

As for the other device, it’s a clean setup that doesn’t have a bunch of cabling, etc. lurking around. e-waste? Hardly. It produces less e-waste than the longer ethernet cables, power bricks, etc. you’d need to make a cluster- and these are much, much more useful than one’d think there.

>Wrong… What about the fuel spent to power your useless posts to be? The fuel expended on my “useless posts” is probably more than made up for by the fuel saved by my browser not fetching ads and tracking widgets from google and friends (TL;DR; adblock). IMHO someone that only appears to wave their e-ween about (usually after misunderstanding something) like yourself shouldn’t really be the one in charge of classifying posts as useless or not. 😉 >As for the other device, it’s a clean setup that doesn’t have a bunch of cabling, etc. Look at the picture with all… Read more »

Unfortunately no ‘master node’ attempt you could log into to power cycle individual nodes, get serial console access and so on…

That’s uber expensive for what it is.

Which SOC is below the heatsink on the central board?

Very likely whatever el-cheapo GbE switch as found in most 5-port devices. There are good ideas in this design. I also wondered about the ability to use the 40-pin connector to hold them in place and power them, and it’s used here, proving it’s possible. The switch on a slot like this is an excellent idea, just like the short RJ45 cables ending on an HE10 connector. They also thought about implementing the power switches for each board, which is definitely necessary. There is still a big issue with the thermal dissipation, which is more caused by the RPi board… Read more »

About CH330, I made a cheap 5V usb-serial cable with a salvaged USB cable, more pics soon…

Someone’s either a smidge greedy or they don’t have good suppliers for fabrication, etc.