This allows each member of a private mesh network to see the location and distance of all other members and read/or any text messages sent to a group chat. No phone is required unless you have an ESP32 LoRa board without GPS in which case it would get the GPS coordinates from your phone over Bluetooth. A phone is also needed to send a message. 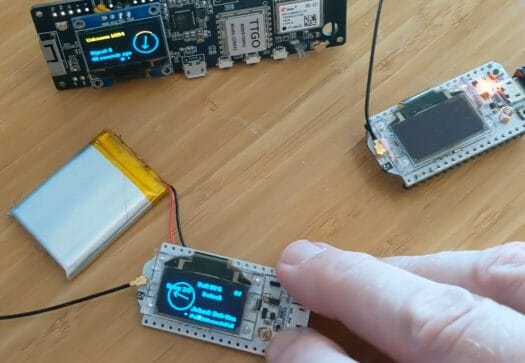 The project currently works on three different boards TTGO T-Beam, TTGO LORA32 and Heltec LoRa 32. The T-Beam is recommended as it sells for around $26 plus shipping and features a 18650 battery holder so you can source the battery easily locally. Just make sure to purchase the right frequency 433 MHz, 865 MHz, 915 MHz or 923 MHz so it can be used legally in your country.

You’ll find firmware and source code on Github, and you can install it using the usual Esptool like on any ESP32 board. The optional Meshtastic Android app is available on Google Play, and the source code is located in a separate repository. 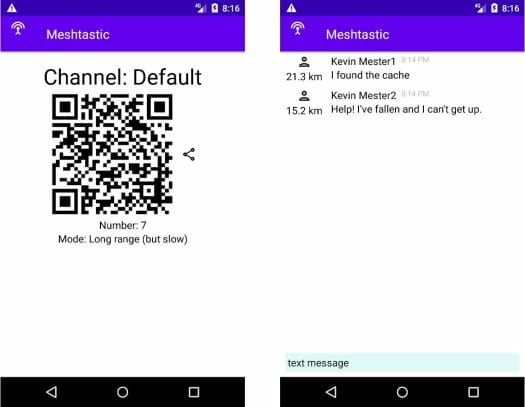 The solution is useful in remote locations where cellular networks are not available, and I could also assume it would be a nice solution in disaster zones where the infrastructure is not working since the line-of-sight range is over several kilometers. Software is still considered alpha, so they are working on improving the system and eventually plan to have a modified version of Signal app that works with the project.

Meshtastic reminds me of Pycom PyGo that aims to create LoRa mesh networks for chatting in remote locations. It was introduced in 2018 via Kickstarter with shipping scheduled later in 2019, but as usual, there were delays that were later compounded with the impact of the coronavirus outbreak.

While on the subject of Espressif Systems SoC and GPS, I was also informed that the popular Tasmota open-source ESP8266 firmware used for automation devices now also supported GPS. Pucebaboon gave it a try and reported his experience after getting the GPS coordinates to show up in Tasmota web interface using “WAVGAT NEO-6M” GPS board connected to an ESP8266 module.

In the radio world, the antenna makes the difference. Too bad those modules come with shitty antennas.