There are plenty of enclosures for Raspberry Pi board and other compact x86 or Arm Linux SBCs, but many projects require expansion boards and it’s not always possible to use an off-the-shelf case.

That’s with that in mind that Stefano Zorzi and other enthusiasts have created YARC (Yes, Another Raspberry Case), a hexagonal case that supports the most popular single board computers, even when an add-on board – such as a Raspberry Pi HAT – is attached to the board. There’s enough space for up to three 2.5″ hard drives. 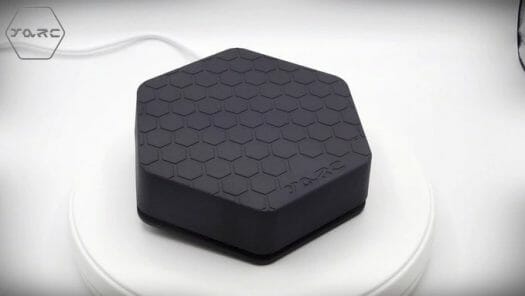 Those are the boards officially supported (tested?) with the case:

Basically any board with compatible mounting holes can be installed in YARC case.

There’s plenty of space for whatever cables you may attach to the board and they’d come out of the large opening on the backside. The photo above shows a Raspberry Pi board fitted with an Audio DAC HAT and a 3.5″ hard drive attached to the top of the enclosure.

Cooling could be an issue depending on your workload and environment, but there are lots of ventilation holes under the SBC location, and since the case is fairly large and high (168 x 150 x 45mm) it’s possible to install either a heatsink or fan depending on whether you need an expansion board or not.

YARC is offered for 19 Euros on Kickstarter with a fairly ambitious 29,000 Euros funding goal. Bundles with up to 100 cases are also offered, or alternatively you could pledge 9 Euros to receive the design files and print it out yourself. Shipping for one case adds 9 Euros to Europe, 19 Euros to the United States, and 29 Euros to the rest of the world. Backers can expect their rewards in July 2020, except for those who pledge for the DIY YARC as they’ll receive .STL files in June.

I like the design but why such a high price and why does the Kickstarter campaign have such a high goal though when the case is only a plastic injection moulded housing/enclosure? €28 (€19 + €9) including shipping to Europe + VAT tax and customs fees of about €20 = a total of almost €80 is also very expensive for only a plastic case. I can buy Retroflag Nespi chassi for less than €25 at a retail store here in Sweden today. Would otherwise be perfect for a DYI home automation controller/hub like Home Assistant, Domoticz, or OpenHAB. Perfect because… Read more »

Are you sure there are VAT and customs fees? The project is based in Italy, and shipping is the cheapest to Europe (9 Euros), so I suppose those are included in the price.

Total price to Europe should be 28 Euros, Italy a bit cheaper actually 24 Euros.

Use a margarine tube, or for 2.5 SSD INUX3D RPI SSD Case

What is a “margarine tube”?

The re_computer case on PreOrder at https://www.seeedstudio.com/re-computer-case-p-4465.html appears to fit a wider array of SBC’s and at $14.90 plus shipping may even be a better price.

I did not know that one was compatible with multiple boards (or forgot). I should get one soon together with the Odyssey (Intel) board, so I’ll be able to try other SBCs as well.

I ordered the Odyssey + re_computer case early April. Order page says availability is 04/08. I expect it will actually be shipped early May if lucky. Given the Celeron J4105 I expect performance to be very similar to the Odroid H2. The two boards aim for slightly different usage though.