With the (potential) shortage of ventilators due to COVID-19 pandemic, people have been working together to create cheaper and/or open-source ventilators, and we previously covered a smartphone-powered ventilator, as well as an open-source Arduino ventilator.

It should come as no surprise some companies have started to make ventilators powered by Raspberry Pi boards. 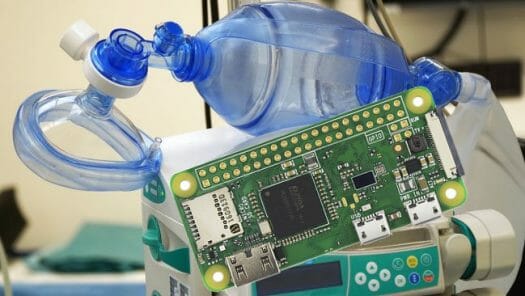 Tom’s Hardware reports the Raspberry Pi Foundation is specifically ramping up production of the $5 Raspberry Pi Zero because manufacturers are indeed integrating the tiny SBC into ventilators.

One of the main challenges with rapidly scaling manufacture of products like this is that you may be able to surge production of the air-handling elements, but you still need to provide the control element: often the components you need are on 20-week lead times and (hopefully) we’ll be out of the other side of this pandemic by then.

Raspberry Pi ‘builds to stock’ rather than ‘building to order,’ so we generally have products either on-hand or in the pipeline with short lead times.”

The BBC reports some universities in Columbia have already started to test a Raspberry Pi and Arduino powered ventilator based on Mascorro (Macobot) open-source design found on Github.

Trials will first be made on artificial lungs, then on animals, before human trials in early May, and if everything goes well mass production will roll out soon after.

While on the topic of open-source ventilators, Makezine recently shared a table with over 80 open-source ventilators ranked by various criteria including openness, buildability, community support, functional testing, reliability testing, COVID-19 suitability, and clinician friendliness. All criteria are scored out of 5, and the best open-source ventilator according to this rank has an average score of 4.2 points. Puritan Bennett 560 has been manufactured by Medtronic since 2010, and the company recently released design files on its website.

The machine is FDA approved, usually costs over $6,000, and the open-source license will only be valid during the COVID-19 pandemic.

Think this is worth a discussion https://airbreak.dev/

The approach looks heroic but I must admit I’m a bit worried to see such overkill devices used just to periodically open and close a valve, which is normally a task more suitable for small, cheap and ultra-reliable micro-controllers. RPis and other SBCs in general rely on a full-fledged general purpose OS which was not tailored for this use case and where stupid bugs or misconfigurations like everyone has already met in the past like networkmanager suddenly going crazy at 100% CPU, futexes ignoring timeouts after a certain date, random memory leaks anywhere, SD cards showing I/O errors after too… Read more »

I second your view , the given task is well under the capability of small 8 bit microcontrollers , given any working environment the 8 bit one will work far reliable then these full fledge ARM SOCs based solutions .

Nowadays most software is web/HTML5/node/js/promise based, executed in an electron sandbox or kubernetes + nodejs. The co-operative scheduling of js threads is perfect for realtime code. Arm6 based RPi zero is also great because the battle hardened codegens in compilers are more robust than more bleeding edge armv7. Other boards also cost a lot more than $5.

I think you just fully outed yourself as a bot or a seriously dedicated troll. Or maybe it’s both? A bot running on a orangepi board?

Medical ventilator/respirator have to be much more advanced than simply opening and closing a valve, please see this video which explains why and how https://www.youtube.com/watch?v=7vLPefHYWpY&t=833s

Indeed, which is another reason for using something more reliable. However as someone else mentioned, the *real* work is done by an arduino, while the RPi is only used to control the display. In the worst case the impact could only be that reported info are wrong and/or delayed which will most often have limited impact as long as all don’t fail at the same moment due to a time-related bug.

What could go wrong? This is a fun exercise for students doing a proof of concept but not really realistic for mission critical devices.

Thousand buying up supplies and alternate supplies during a pandemic with shortage of ventilators.

If your that skilled, volunteer at a factory to make ventilators, or in a hospital to fix broken ventilator.

Better still volunteer to get aid to isolated vunerable people.

Seems Sea-Long Medical Systems has drawn huge interest from hospitals and foreign countries seeking alternatives in treating COVID-19 patients amid a ventilator shortage. Its a plastic oxygen helmet. waste time posting a link they just get deleted ” Patel led a first-of-its-kind study in 2016 that tested the Sea-Long helmet against an oxygen mask for a group of 83 intensive care patients suffering from acute respiratory distress. The researchers found that the helmet led to superior outcomes: Patients using them required ventilation 18.2 percent of the time, compared to 61.5 percent for the masks, and had a better 90-day survival… Read more »

Renesas has introduced an open-source ventilator system reference design that customers can use to swiftly design ready-to-assemble boards for medical ventilators. ”

Harwin, the Hampshire-based connector company, has modified an existing 3d printable anti-covid-19 face shield design to make it print quicker, and has put the print file on its website here for others to use. ”

This is similar to the “PS2 Game Console Is Powered by Raspberry Pi” article that appeared previously. It was later updated to reflect that fact that the Pi was only a minor component and not actually “powering” anything but SMB.
https://www.cnx-software.com/2019/09/07/pis2-diy-handheld-ps2-game-console-is-powered-by-raspberry-pi-2-sbc/

The BBC article references an open source design. When looking at the source of it, you can plainly see that the RPi is just a display interface. It does not “power” the ventilator as that task is actually handled by an Arduino.
github.com/Mascobot/pandemic-ventilator-2.0/blob/master/code/desktop/Covid_ventilator.py

This analogous to claiming that your dashboard “powers” your car.

Despite “technology” being in their job description BBC technology reporters have less knowledge on the field than a tech youtuber (aka gadget unboxer).